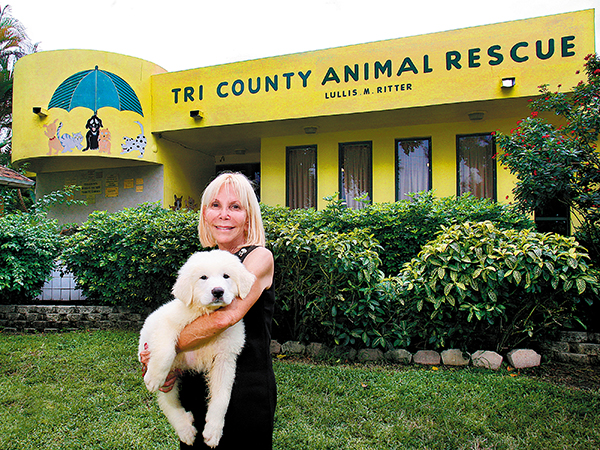 Living in South Florida comes with lots of perks (sandy beaches, awesome sunrises and no icy sidewalks) as well as perils — with hurricanes topping that list. Think of the time and energy you invested to try to fortify your home from Hurricane Irma’s relentless winds and rains. Now multiply that by, say, 40 times or more.
And think of keeping a cool head all the while and putting the needs of other people and animals in front of your own as the hurricane zeros in on you and what you cherish the most.
That’s exactly what Suzi Goldsmith, co-founder and executive director of the Tri-County Animal Rescue in west Boca Raton, did before, during and now after Irma teamed up with a tornado to pay this nonprofit complex a rude visit.
“We are grateful that no employee or animal was harmed during the storm,” she says. “We were hit hard and lost power for a week, but we are still here and we will continue to be here for the animals.”
About seven staffers volunteered to work 24/7 shifts during the storm to protect the 200-plus cats, dogs and other animals on this 12-acre property. The shifts began on Sept. 9 and ended on Sept. 12.
Around 3 p.m. Sept. 10, the storm struck Tri-County Animal Rescue, with the biggest hit delivered when a century-old maple tree landed and crushed the large isolation building. At the time, two employees and about 40 cats and dogs with contagious diseases like ringworm were inside. All escaped injury.
The staffers braved the high winds and pelting rain to relocate these frightened animals into the main building as power flickered on and off and a backup generator ran until it emptied its diesel supply.
“Our 2,400-square-foot isolation building is gone,” says Goldsmith. “We are just waiting for the permits to demolish the building.”
What about insurance to cover the building?
“We have liability insurance, but we can’t afford insurance to cover loss due to a hurricane,” she says. “We’re a nonprofit and that kind of insurance costs a lot of money that we do not have.”
Just before Irma’s arrival, people from this rescue shelter made two trips to Houston in trucks loaded with bedding, food, medicine and other items for animals displaced during Hurricane Harvey.
And after Hurricane Maria, Goldsmith reached out to pilots of small aircrafts to bring in 20 to 30 dogs from Puerto Rico to her rescue compound so the shelter staff could try to get them adopted into homes in South Florida.
“What happened to Puerto Rico is so mind-blowing and sad,” says Goldsmith. “They got hit worse than we did.”
Mother Nature is indiscriminate when she unleashes storms, earthquakes and wildfires. Goldsmith offers these tips to other animal shelter groups to help them prepare for the worst and to protect animals under their care:
• Maintain a large supply of bottled water to give to staffers and animals during storms.
• Make sure you have a generator for backup power as well as electric drills and saws.
• Invest in special battery-operated radios that provide up-to-date weather information.
• Ensure you have enough food stored for the animals.
• Begin boarding up windows and tying down furniture as soon as you learn that a storm may be heading your way. Goldsmith started this a week before Irma hit.
• Usher mobile vans and other vehicles into secured parking places so they are not out and exposed to the storm.
• Bring in air mattresses and plenty of food (sandwiches, potato chips, sodas) for staffers who may not be able to leave the shelter due to the storm conditions.
• Do your best to keep animals calm and stick to routines as much as possible, including twice-a-day feedings. Goldsmith fitted some storm-fearing dogs with anti-anxiety jackets known as Thundershirts.
“My advice is to prepare in advance and don’t wait until the last minute,” she says. “I began stockpiling food and water in June.”
Goldsmith has weathered other hurricanes during her 21 years at Tri-County Animal Rescue and suspects she will weather more.
“I have such a passion for saving animals’ lives,” she says without hesitation. “It keeps me and my employees going. We are here for the animals. Always have been and always will be.”
To learn how you can help Tri-County Rescue recover from the storm, visit www.tricountyanimalrescue.com or call 482-8110.