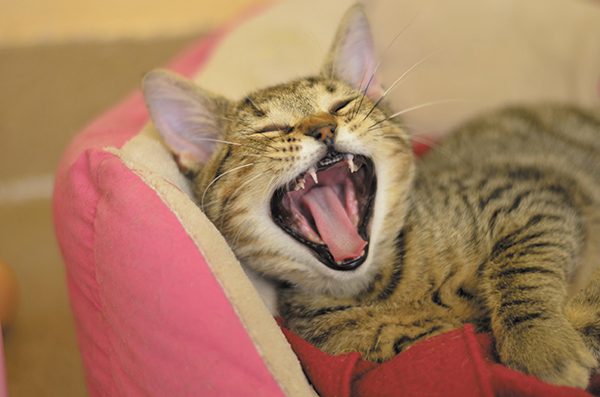 Cats don’t have a sense of humor but can be quite hilarious to watch.

If you share your home with a dog or a cat, I’m wagering that your pet’s antics pop a smile on your face at least once a day. In fact, pick a day and count how many times your pet makes you grin, chuckle and even unleash a full belly laugh. I bet your pets make you laugh more than your spouse, kids or best friend.
Admit it (I will) that those short videos posted on Facebook, Instagram and YouTube that make you laugh until you nearly cry always seem to feature a dog, cat or other pet doing something goofy and unexpected.
Pets don’t aspire to be standup (on all four legs) comedians. Their needs are simple and sincere: All they want is healthy chow, a comfy bed and a big heaping of our love.
So, if you are in a snit over bumper-to-bumper traffic, bored by leftovers lingering in your fridge or stressed by work projects, head over to the Palm Beach Improv in West Palm Beach on April 9 to take in the comedy act of rising star Adam Ferrara.
Yep, he is “that guy” who has appeared on Late Night With Jimmy Fallon, earned two nominations for best male standup by the American Comedy Awards and has appeared on many television shows, including NBC’s Law & Order, ABC’s Ugly Betty and starred opposite Denis Leary in ABC’s The Job.
Not sure if Ferrara will work pets into his routine that night, or if there may be a surprise onstage appearance by a four-legger, but he earns my applause for making this a special night for shelter animals. That’s because the Lowe’s I Promise To Care Foundation officials are sponsoring Ferrara’s time at the mic and will be giving 50 percent of all ticket sales to the Peggy Adams Animal Rescue League.
In any given month, this West Palm Beach-based shelter strives to find forever homes for 700 dogs and cats under their care.
“We are always appreciative of any group offering to conduct a fundraiser for us and we are grateful to be chosen by Lowe’s I Promise To Care Foundation,” says Rich Anderson, executive director of the Rescue League. “We expect a great turnout.”

Countless studies confirm that pets do a body good, by elevating our feel-good hormones, lowering our blood pressure and even reducing cholesterol. And, who needs Prozac to restore a healthy mindset when you’re blessed to have a purring cat on your lap or a fun-looking dog begging you to toss that ball across the living room just one more time?
“We say there is never a dull day at Peggy Adams because we have natural entertainment value of hundreds of animals here,” Anderson says. “If you are feeling a little stressed, the opportunity is here to spend time with our dogs and cats, who are instant stress relievers.”
Inside Anderson’s home are a pair of Chihuahua-Yorkshire terrier mix siblings named Rex and Roxie. He adopted them when they were abandoned as litter mates nearly 10 years ago and every day since, the doggy duo keeps smiles on the faces of Anderson and his family.
“We affectionately call Roxie the spaz because she is a very hyper little dog who loves to harass her bigger brother, Rex, who puts up with her,” says Anderson. “And, for some odd reason, Rex loves to howl at train horns — nothing else. I love my goofy pets.”
So do I. When I teach my pet first-aid classes, my orange tabby Casey draws chuckles from students each time he dives headfirst into my partially opened first-aid kit bag to grab the bag of treats and dash behind my podium. He acts as if we can’t hear him crunching his stash of treats.
And my Jack Russell terrier mix Kona loves to perform. Sometimes she gets wobbly legged when she does a series of body spins too quickly. She plops on the floor and recovers by leaping into my arms and showering my face with kisses.
There is no question that pets keep you happier and healthier. And laughter is good medicine, especially when the source is an ever-loyal canine or feline.

Got a funny story, video or photo of your pet tickling your funny bone? Share on our site, www.thecoastalstar.com. Just click on Talk, Videos or Photos.