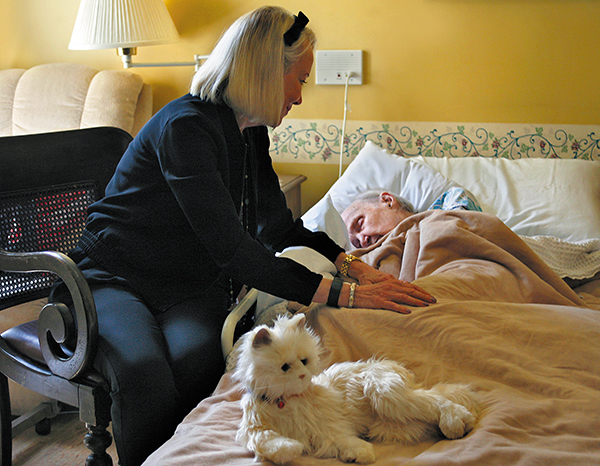 Every day and in many ways, Butterscotch and Rusty demonstrate the healing power of pets toward residents, their visiting family members and staff at Abbey Delray. Even Hurricane Irma did not diminish the positive impact made by these robotic pets inside this Delray Beach senior living center.
You read right: RoboPets. While they do not require being fed, taken for walks or having litter boxes scooped, Butterscotch and Rusty exhibit many behaviors that real cats and dogs do. On cue, they purr, bark, cuddle and even roll over.
In fact, it’s easy to forget for a moment that they are not real pets. That’s because, like pets often do, they spark engagement and interaction from all who come in contact with them.
And they seem to unlock fond memories of beloved pets from residents’ childhoods.
“Having these RoboPets around makes you smile and relax,” says Lori Eisele, the life enrichment engagement lead at this center. “These RoboPets are easier for some of our residents in bed to hold and we don’t have to worry about these pets wiggling too much. The cat actually purrs, opens and closes its eyes and the dog wags his tail and makes a cute panting sound.”
These RoboPets, manufactured by Hasbro, represent a third way for residents to get their “fur fix.”
In addition to real pets allowed in some private residences at senior communities as well as certified therapy pets who make weekly visits, the robotic animals are built to delight. Each RoboPet features built-in sensors that respond to motion and touch. These battery-operated pets sport realistic soft fur that beckons to be touched and petted. And yes, they also are programmed to take naps and even seek belly rubs.
“It’s wonderful to see the smiles on the faces of residents as they interact with the robotic pets,” says Vicki Brown, Abbey Delray Health Center administrator. “They provide a little something extra to look forward to each day.”
Lifespace Communities, which owns and operates Abbey Delray and 11 other such communities in seven states, purchased these robotic cats and dogs for six of their communities, including about 30 at Abbey Delray.
Ann Walsh, Lifespace senior vice president of operations, says the robot animals made sense as an investment in residents’ well-being:  “The impact the robotic pets have had on our residents has truly been remarkable. As crazy as it might sound, these little robo-dogs and robo-cats are changing lives.”
In some cases, the RoboPets have aided in motivating some bedridden residents to resume eating healthy meals and engage in conversations with others again.
“The first one I gave out was to a woman with end-stage cancer and her family was glad that she had this robo-cat for the last few days of her life,” recalls Eisele. “She knew it wasn’t real, but it was comforting to her.”
Patricia and Andy Mendell agree. They first were introduced to a robo-cat presented to their mother, Margaret Mendell, during her 100th birthday celebration at Abbey Delray on June 20.
“People were coming into the party room just to see this robo-cat,” says Patricia Mendell, a clinical social worker and psychotherapist in New York who is now having RoboPets available in her practice.
Although his mom is bedridden, Andy Mendell says he can see the spark in her eyes when she holds the robo-cat.
“She talks to the robo-cat and asks if she needs anything or wants anything,” says Andy Mendell, who retired as a budget director for a university in New York. “She really loves it. I’m amazed by how it purrs, moves its ears, blinks its eyes and rolls over to be petted on its belly.”
The RoboPets answered the call when Abbey Delray was contending with the violent winds, steady rains and swirling debris unleashed by Hurricane Irma last month. With a  community curfew enforced for safety, some family members rode out the weekend storm inside the center with residents and staff. To ease the tension, the RoboPets were passed around.
“We had generator power when the storm hit, but these robo-cats and robo-dogs were effective in relaxing residents, young family members and even our staff,” says Eisele. “One resident named one of the robo-dogs Liberty and told it, ‘I am so glad you made it though the storm.’ These RoboPets helped a lot of people get through this hurricane.”
Paws up to the power of pets — no matter if they are real or simply really believable in the goodwill they provide.