Ruff Tales Rescue regularly saves animals such as Christian (above)

from bleak lives in South Florida cages. After being fostered and medically cleared,

the pets are driven to Miami-Opa Locka Airport by Melanie Malanowski (below),

where they board an Ameriflight plane (bottom) for their new homes in New England. 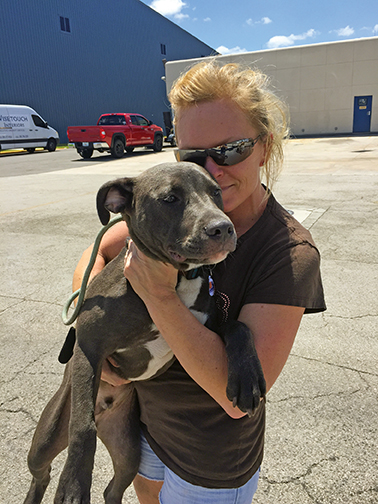 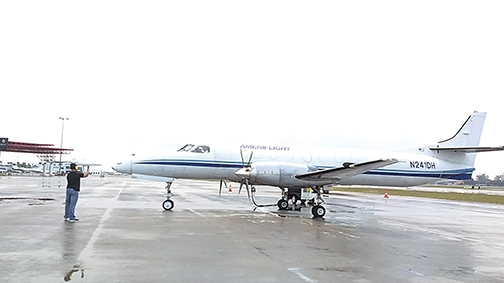 Hunter, Dickens, Missy and Zenna headline the latest list of dogs rescued from kill shelters in South Florida and who now enjoy loving homes in Massachusetts, New Hampshire, Connecticut and Rhode Island.
They owe their second chance for quality lives to a Boca Raton resident named Melanie Malanowski, who literally is reaching new heights when it comes to transforming shelter dogs into welcomed members of families.
That’s because instead of driving dogs to new homes, she flies them there.
Her day job is operations manager for Jet Lease Capital, a West Palm Beach-based aviation company that deals with the lending and financing of aircraft — from turboprops to large cabin aircraft.
This complements her other job: spearheading a nonprofit group called Ruff Tales Rescue that is committed to saving animal lives. Since 2014, Malanowski and a dedicated corps of volunteers have been plucking animals from overcrowded shelters in South Florida, putting them in foster homes temporarily, and then after receiving health clearances from veterinarians, flying these lucky dogs to New England, where they spend a brief time adjusting after their flights before landing in homes.
“Many New England states have strict spay and neuter laws, so they do not have the overpopulation problems that we have in animal shelters in South Florida,” says Malanowski. “A lot of the dogs I pull from a shelter here are about to be euthanized. We have been fortunate to place puppies and seniors up to 14 years old in new homes in New England.”
Malanowski was inspired to create Ruff Tales Rescue while volunteering to direct dog play groups at the West Palm Beach Animal Shelter.
“In the play groups, you get the chance to really know these dogs and get a good read on them, which helps a lot in knowing how to place them in the right homes,” she says. “For example, I pulled one brindle-colored pit bull named Pepper from the shelter. She was a superstar in the play group and I’m happy to report that she has been adopted in New England and she is doing awesome.”
Tapping into her connections in the airline industry, Malanowski worked out an arrangement with Ameriflight, a cargo airline company. It turns out that an Ameriflight plane full of medical supplies lands at the Miami-Opa Locka Executive Airport every Friday. It would then turn around and fly empty back to Bedford, Mass., to retrieve more medical supplies.
So, Malanowski approached Ameriflight officials about filling its cargo plane with pets in need of homes in New England. On most Friday afternoons, you can find her arriving at the airport with crates of dogs. Once the pets are on board, she and her rescue group track the flight and pinpoint when the plane of the about-to-be-adopted pets arrives in Bedford.
“We are very grateful to Ameriflight — they don’t charge us,” she says. “They are very good with the pets and have even held the plane for me when I was late arriving due to traffic delays.”
To ensure all of these animals are healthy enough to fly, local foster volunteers bring them in for complete medical examinations by veterinarians and then take them into their homes for about 10 days.
“Before these shelter animals board, they must be parasite-free and have no health issues,” Malanowaski says. “And even if we have an approved adopter in New England, the dog does not go directly to the adopted person. They stay with a foster team member there for a couple days to adjust after the flight and must be examined and issued another health certificate by a New England veterinarian. We want to make sure shelter animals from South Florida are not bringing any diseases into New England.”
The adoption fee of $375 covers the animal’s spay/neuter surgery, de-worming, necessary vaccinations, microchipping for identification, the flight and, per laws in New England states, a mandatory 48-hour quarantine period and health certificate.
Fundraising events like the Yappy Hour event held last month in West Palm Beach are enabling Malanowski and her team of volunteers to meet the Ruff Tales Rescue motto: “Changing lives four paws at a time.”
When she isn’t saving the lives of shelter animals or directing operations at Jet Lease Capital, Malanowski revels in hanging out with her rescued dogs: three young pit bull mixes answering to the names of Ty, Dante and Lucy, plus Daisy, a boxer with maternal instincts who serves as “momma dog” to the other three.
To me, Malanowski gives new meaning to the motto “flying the friendly skies.”