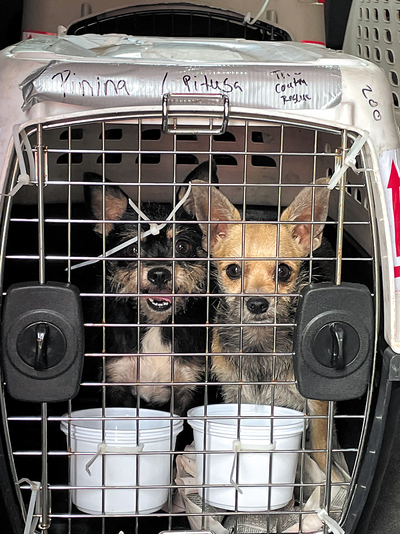 Animal rescue groups and humane shelters, big and small, share a common goal: to save homeless dogs, cats and other companion animals and find them welcoming homes.
And, it turns out, these groups are also united by an unwavering pledge: to help one another when a natural disaster strikes.
Hurricanes Fiona and Ian demonstrated this collaborative spirit dramatically. Both storms reached Category 4 levels in September, causing billions of dollars in damage and displacing thousands in Puerto Rico and along Florida’s Gulf Coast.
Quickly stepping in to assist were these groups based in Palm Beach County: Big Dog Ranch Rescue, Tri-County Animal Rescue and Peggy Adams Animal Rescue League. They accepted shelter animals displaced by the hurricanes and coordinated supply trips to deliver food and other needed items.
“We are all in it to help animals and we are not in competition,” says Suzi Goldsmith, co-founder and executive director of Tri-County, west of Boca Raton. “After Hurricane Fiona hit Puerto Rico, we arranged to get as many dogs as possible on a cargo plane from San Juan to Miami. I estimate we brought in about 200 dogs, and we are so happy to help them out.”
Then nine days later — on Sept. 28 — Hurricane Ian pounded Florida’s southwest coast, causing catastrophic damage especially to the Fort Myers and Cape Coral area.
Peggy Adams quickly assembled four teams and headed from West Palm Beach in the early morning to drive across the state to assist the Gulf Coast Humane Society, which lost its roof. They brought back 57 cats and dogs to their shelter by late afternoon.
“Many of these animals have health issues and we are fortunate to have the facility to care for them,” says Sue Berry, chief executive officer at Peggy Adams.
Staff members with Big Dog Ranch Rescue, based in Loxahatchee Groves, quickly collected pet supplies, drove across the state, and brought back animals from damaged shelters on the Gulf Coast.
When I reached Robin Friedman, Big Dog Ranch executive director, a few days after Ian struck, she said her staff was making its third cross-state trip.
“Normally, it takes two to three hours to reach the Gulf Coast, but it took us six hours due to the flooding and road closures,” says Friedman.
Big Dog Ranch Rescue coordinated efforts with Tri-County Animal Shelter to assist the Naples County Humane Shelter, the Gulf Coast Humane Shelter and Manatee Animal Services. They loaded large buses with supplies and brought back more than 35 shelter dogs at first count.
Friedman shares a special moment that illustrates the helping-one-another spirit. A military veteran reached out to ask if her rescue group could care for his two large dogs so he could stay and help people and pets in the Port Charlotte area.
“When anybody is vulnerable enough to tell you their situation and is staying to help others, of course, it makes you want to help,” she says. “We will take good care of his dogs until he is able to take them back home.”
Goldsmith recalls the damage caused by Hurricane Irma, another major storm, when it blew through on Sept. 10, 2017. The storm took out power at the shelter for a week. A century-old maple tree crushed a large building on the 22-acre campus — with two staffers and 40 animals inside. Fortunately, all escaped injury.
“Every group in Florida and other places reached out to help us,” recalls Goldsmith. “That is what you do. And that is why we are reaching out and trying now to help those places hit by Hurricanes Fiona and Ian. We will always be there for the animals.”