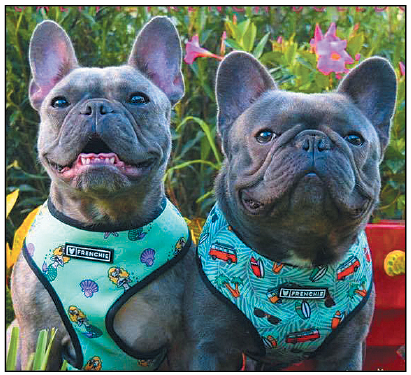 The always engaging French bulldog is not a great swimmer and so should wear a doggie life vest in the water. Photo by Ashley McGeeney, Blue Wonder Frenchies

What do Lady Gaga, Leo DiCaprio and Dwayne “The Rock” Johnson have in common with some dog lovers who live in West Palm Beach?
All of them share their homes with the French bulldog breed that they regard as magnifique.
I admit I found the results of a recent dog popularity poll surprising. It turns out that of the 190 recognized dog breeds in the world, the French bulldog ranks No. 1 in West Palm Beach. This news is according to research conducted by the American Kennel Club, an organization that dates to 1884 and maintains the largest registry of purebred dogs in the world.
Sorry, Labrador retrievers. Apologies to all your German shepherds, and better luck next time to those smiling golden retrievers. All of these fine breeds take a back leash to the French bulldog here as well as in New York City, Los Angeles and Honolulu, according to the AKC poll.
“This is the second year in a row that the French bulldog has been on top in West Palm Beach,” reports Gina DiNardo, AKC executive secretary. “It looks like this playful, smart breed will continue to be a popular choice.”
Who isn’t surprised by this ranking? Certified professional dog trainer Jaime Devereaux, who trains all types of dogs throughout Palm Beach County, and professional French bulldog breeder Ashley McGeeney, co-owner of the Blue Wonder Frenchies located in Loxahatchee.
“I was not surprised by this poll result because Frenchies are popping up everywhere lately,” says Devereaux, who operates Jaime Doolittle Dog Training. “I’ve trained numerous Frenchies and fall in love with every single one of them. They are great dogs.”
Devereaux says some people mistakenly peg French bulldogs as stubborn, but she has found that not to be the case.
“I’ve actually found Frenchies to be very easy to train because they are usually very food-motivated and excel with obedience training. Their only limitation would be that they are what’s known as brachycephalic dogs (short muzzles) and can overheat quickly, so short training sessions outside work best for them.”
McGeeney and her husband, Jared Schorr, fell in love with French bulldogs in 2013, motivating them to carefully breed AKC-registered French bulldogs at their Blue Wonder Frenchies center located just outside of West Palm Beach.
“Their quirky personalities and cute bat ears are what I think draws people to this breed. That’s what attracted us to French bulldogs,” says McGeeney.
Here are some fun facts about Frenchies:
They didn’t originate in France. These toy-size bulldogs were born in Nottingham, England, during the mid-1800s, where they became mascots for lace makers. They migrated to the French countryside with some of these lace makers and bred with terriers and pugs, developing their now-famous bat ears.
Yes, they do snore. That’s because of their short snouts. So, turn on your sound machine to muffle their snoring at bedtime.
When they are awake, they do not have reputations as big barkers, but they do enjoy engaging in conversations with their favorite people.
Be patient during potty training. French bulldogs may need a little more time and guidance to understand the home is their den and their bathroom is outside.
Vest them up for swims. These stocky, short-legged dogs are no canine versions of Michael Phelps, so be sure to fit them in a life vest for laps in the pool and swims in the ocean. Always supervise them around bodies of water.
They sport fun nicknames. Because of the way they play out their back legs, they are affectionately dubbed “frog dogs” and due to their playful personalities they are known as “clowns of the canines.”
McGeeney adds these insights into this breed: “French bulldogs are very curious and more apt to learn tricks than obedience first. But their fun-loving attitudes make them get along with everyone, people and dogs alike.”
French bulldogs are not typically up for adoption in animal shelters, but you can reach out to breed rescue groups led by the French Bulldog Rescue Network at www.frenchbulldogrescue.org. Or you can consider getting a puppy from professional breeders like McGeeney (bluewonderfrenchies.com).
“Jared and I have been residents of Palm Beach County for our entire lives and the focus of our breeding program is quality over quantity,” says McGeeney. “All of our dogs live in our home. Our puppies are well-socialized to all kinds of sights and sounds to make sure you have a well-adjusted family member.”
Oh, in case you were curious which breeds make the top five in nationwide popularity: From first through fifth for 2017 are the Labrador retriever, German shepherd, golden retriever, French bulldog, and the bulldog.
My canine pack includes a trio of mutts: Kona, a Jack Russell terrier-whippet combo; Cleo, a bichon frise-poodle blend, and Bujeau, a Bernese mountain dog-Catahoula leopard mix.
My favorite purebred is the Pembroke Welsh corgi, a short-legged, long-backed canine of the herding group and a royal favorite of Queen Elizabeth. My late great Jazz was a corgi and I affectionately describe corgis as a cross between Robin Williams and the Three Stooges because of their brilliant comedic personalities.
What’s your favorite dog breed and why? Share your reasons by emailing arden@ardenmoore.com.