cops are friends — and saviors 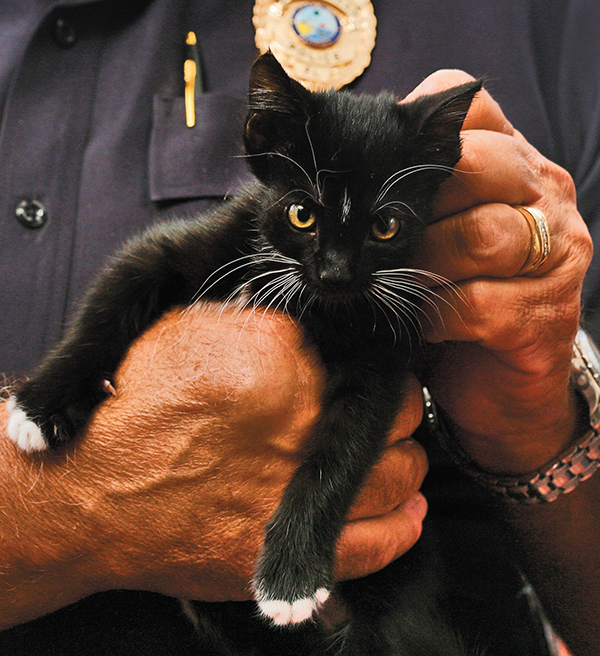 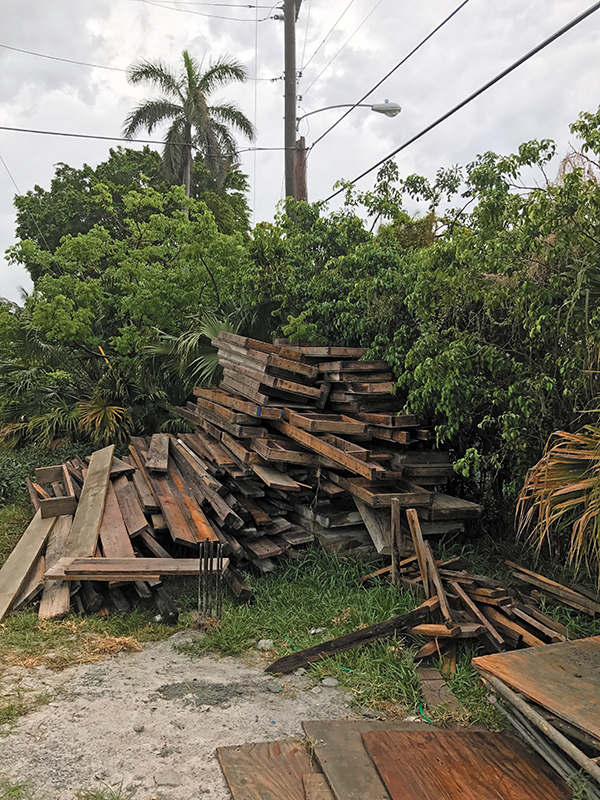 Resident Peter Klein heard the kitten’s meowing for help from under this mountain of lumber.

Members of the Gulf Stream Police Department stand ready to assist anyone in their coastal town, and that includes those who meow, waddle or swim. In a recent four-day span, a tiny orphaned kitten, seven trapped ducklings and a tangled sea turtle owed their gratitude — and their lives — to police officers who patrol this 2-mile stretch of A1A and part of U.S. 1.
Chief Edward Allen, who rose up the ranks and now heads this department in his 29th year of service, has learned to expect anything and everything when it comes to patrolling this community that swells up to only about 900 during snowbird season.
“As a police department in a small community, we don’t have animal control or other departments that bigger cities have, so our department must be adaptable and be able to do a little bit of everything,” says Allen. “But even I must admit, that was one unusual week when it came to critters needing our help.”
The triple rescue began on a Wednesday when Gulf Stream resident Peter Klein was taking a walk through his once-quiet neighborhood now disrupted by construction crews building large homes in various stages of completion surrounding Klein’s home. “Construction activity in Gulf Stream has been proceeding at an unprecedented pace,” says Klein, a corporate attorney. “With all this activity, there is plenty of debris everywhere and there are plenty of opportunities for animals to get into trouble.”
During his walk, Klein zeroed in on a strange sound coming from a residential construction site across from his home. As he got closer to a high stack of construction debris, he cringed as he identified the source of the sounds.
“Mew! Mew! Mew!” came urgent and loud cries from a tiny kitten trapped under the mountain of lumber with nails jutting out, concrete pieces and old scaffolding.
“I couldn’t see this kitten, but definitely knew he was tiny and he was scared,” says Klein, who with his wife, Jennifer, happily share their homes with a few cats. “This kitten had the lungs of Pavarotti. It was evident he was in distress and it was truly heartbreaking.”
Recognizing it was too dangerous to attempt to remove the debris to reach the trapped feline, he tried contacting the construction project manager. Without a response, he then headed to the Gulf Stream Town Hall and told employee Rebecca Tew about the kitten.
“I went back home and within 10 minutes, it seemed like the entire day shift of the Gulf Stream Police Department rolled onto the site,” Klein says. “Two more town employees also arrived. These guys dug in and shifted every piece of rotten wood on the pile and under the bottom piece, discovered a feral kitten aged 3 to 4 weeks.”
In the hot sun, Allen supervised and helped as Lt. John Haseley, Sgt. John Passeggiata, Officer Randy Wilson, plus maintenance employees Brian Dietrick and Wayne Songer spent about 45 minutes to remove the pile. As soon as the kitten was spotted, Songer scooped him up in his gloved hand. Jennifer Klein then placed the kitten in a pet carrier.
“I told them that despite sweating inside your blue uniforms and bulletproof vests, you got right in there and saved a life today,” says Peter Klein.
The Kleins then drove this injured and dehydrated kitten to the Colonial Animal Hospital in Boynton Beach for medical care.
“He weighed 9 ounces, had lesions on his face caused from rubbing against the wood and was dehydrated,” describes Klein. “I’m about $680 into veterinary bills for him, but he has definitely found a home with us. He is healing and definitely playful.” after Klein heard the kitten crying at a construction site.

‘He was tiny and he was scared,‘ said Klein, who kept the cat.

Coming up with a name for this kitten was easy for the Kleins.
“We named him Chief in honor of Chief Allen,” says Klein. “He was in charge of the rescue and he mobilized these guys. He was the boss and I figured this little kitten will be the boss of me.”
Allen learned of the kitten’s name a day after the rescue.
“When I first heard this, I thought they were joking, but I realize it is a compliment to me. And yes, this is the first time I’ve had a cat named after me,” says Allen.
Three days later, the Gulf Stream police answered two more rescue calls. Two paddle boarders alerted Sgt. Bernard O’Donnell that they spotted a sea turtle entangled in fishing line out in the ocean. Two more people on water scooters assisted in bringing the turtle to shore and removing the tangled line.
A team from the Gumbo Limbo Nature Center in Boca Raton arrived and transported this 300-pound turtle to the center’s sea turtle rehab facility to care for him while he recoveries from his injuries.
And later that day, police rescued ducklings in distress. O’Donnell and Officer Ramon Batista answered the call concerning seven ducklings trapped inside a storm drain. They were able to remove the grate from the drain and scoop out the ducklings, which quickly waddled to be reunited with their relieved mother.
All in a day’s work in Gulf Stream, right, Chief?
“We certainly had a run on animals in need that week, but we are very glad that everything turned out great,” he said. “We never know what the day will hold for us being in this small town, but it is definitely rewarding to do something for a good cause.”