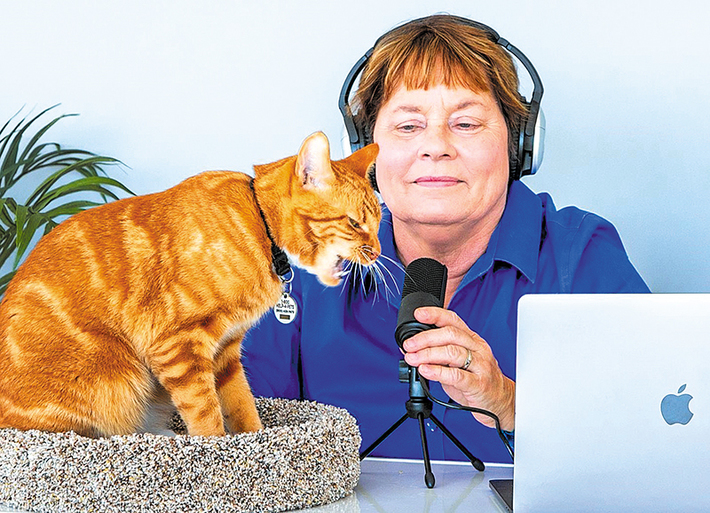 One day, I am talking with a pair of American veterinarians about their experiences aiding pets at the Ukraine border. The next, I am picking the brain of one of the world’s top veterinarian behaviorists who is sharing insights into doggy actions. A few days later, I am chatting with a globe-trotting animal advocate who is using a high-tech drone to save wildlife and lost pets.
Behind a microphone inside my backyard office aptly named Ard’s Den, I face no geographical limits as the host of a new nationally syndicated weekly radio show. It’s called Arden Moore’s Four Legged Life.
Welcome to my — new — world. I am inviting all of you pet advocates along for the ride.
My editors at The Coastal Star asked me to share my radio tale in this column. So, here goes.
Let me back up a bit first. Since the debut of The Coastal Star, I’ve written the pet column. It has given me an opportunity to spotlight people in our community doing extraordinary things for companion animals and wildlife. And since 2007, I’ve hosted the longest-running pet podcast on the planet — the Oh Behave! show on Pet Life Radio.
Then earlier this spring, I got an unexpected call. Producer Brad Sperling, who lives in Port St. Lucie, invited me to host this new weekly radio show that airs coast to coast. Then a few weeks later, he told me my show got noticed and added to the Talk Media Network. Welcome to the big leagues!
My radio show hit the airwaves on May 21. It also streams on Spotify, iTunes, YouTube and more outlets, so I hope to reach as many pet people as possible.
The premiere episode featured two top veterinarians always ready to give back: Dr. Marty Becker, known as “America’s Veterinarian” and the founder of Fear Free Pets; and Dr. Gary Weitzman, a best-selling author and president of the San Diego Humane Society. When war broke out in Ukraine, both packed supplies and headed out to help dogs, cats and other companion animals accompanying displaced Ukrainians at the Poland and Romania borders.
Becker shared meeting a man in his 60s who crossed the border in a wheelchair, cradling his two scared cats.
“He told me that his apartment had been bombed and he threw himself on his two elderly cats to protect them,” Becker said. “He took shrapnel in his back and was in bad shape when he arrived. He was crying out of joy more than pain because his cats were safe.”
Becker, who serves on the board of World Vets (worldvets.org), added: “I have never been to a war before and did not know what to expect, but what I saw and what I was able to do to help was life-changing.”
Weitzman served in the Air Force decades earlier. He, too, felt the need to assist in Ukraine, so he packed bags with medical supplies and equipment to assist in the veterinary tent at the Poland-Ukraine border. He helped reunite a family with its scared, hungry, lost dog that had been wandering for days.
“Seeing family pets being part of the exodus is proof that companion animals are so important to people, even in bleak situations like this,” he shared on the air. “I have never done anything in my life that has felt better than this. I will be back.”
My show also spotlighted one of the nation’s top pet experts: Dr. Lisa Radosta, a certified veterinary behaviorist who operates the Florida Veterinary Behavior Service based in West Palm Beach.
She unleashed insights into a few common doggy behaviors, including how dogs really feel about being given belly rubs.
“If you are giving a belly rub and the dog snaps at you, it could be because he is in pain,” she said. “Also, belly rubs to people do not mean the same thing in a dog’s mind. When a dog rolls over on his back to show his belly, he could be saying stop. It is like they are displaying a big stop sign to not pet.”
Her advice? “Assume your dog speaks another language,” Radosta said. “Slow down and start to observe them more to improve your communication with them.”
In another recent episode, I tracked down Doug Thron, an aerial cinematographer and take-action environmentalist. He calls home a houseboat in Fort Lauderdale, but he travels the globe as host of the docu-series called Doug to the Rescue that airs on Curiosity Stream.
What sets him apart is his high-tech drone.
“I primarily used drones as a cinematography tool, shooting for shows like Nat Geo and Discovery,” Thron explained. “I got the idea to put an infrared camera on the drone and fly over disaster areas to look for animals.”
The infrared depicts heat signatures of any animals, he said.
“I have a spotlight to verify if it is a hurt animal or an animal who needs rescuing. I also have the GPS coordinates on the drone to be able to locate the animal quickly.”
These are just a few examples of the guests and topics on my show. My goal is to always make guests feel welcome and to educate and inspire my audience in an entertaining tone. Yes, I do unleash pet puns that I hope put a smile on your face. Tune in!

About the show
Arden Moore’s Four Legged Life airs in many ways, from satellite radio to iTunes, YouTube, Spotify and Google Play. You can subscribe for free and never miss an episode by going to www.fourleggedlife.com and picking the streaming service of your choice.