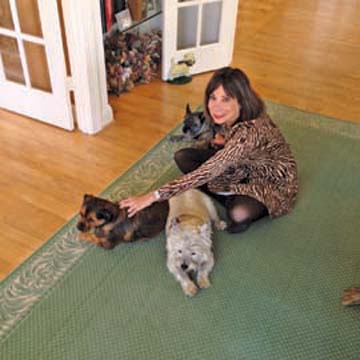 There are people who champion the cause for pets by fostering rescues, volunteering in animal shelters, organizing pet events and bringing their well-mannered therapy pets into nursing homes and schools.
I applaud the contributions made by all of these people. And, I admire a special breed of pet advocate: the legal beagles. These people are committed to working with local, state and national lawmakers to make this a better planet for cats, dogs and other companion animals.
In Delray Beach, there is a very active legal beagle: attorney Mindy Farber. In practice for more than three decades, she specializes in civil rights law for nonprofits, veterans, women, minorities and homeless pets.
She splits her time between residences in Delray Beach and Maryland with her husband and their three well-traveled rescue dogs: Cara, Nicky and Abbey. She serves on the board for the nonprofit Pet Connect Rescue (petconnectrescue.org) in Potomac, Md.
Farber worked with state legislators in Maryland to pass a bill recently that prohibits the sale of animals in pet stores. She is currently working with the state’s House Judiciary committee to get a bill passed that would require people found guilty of animal cruelty to not only serve time in prison but also pay restitution toward the financing of any bills related to injuring or killing animals.
Locally, she is hard at work on finding a solution to address homeless, abandoned animals found on the streets of Delray Beach. Two days after Christmas, she was shopping in downtown Delray Beach when she came across a very weak, mange-filled, little red dog.
“When I found this dog, I called the city immediately and said, ‘Help! There is a dog who is struggling here, just lying on the street,’” recalls Farber. “This dog was dying and I was frantic to find a way to get her medical attention, but was told that the city of Delray Beach does not have an animal control officer and was told to call the county. Well, I tried, but the phone kept ringing busy.”
During this time, Farber called out to passersby for help but to no avail.
“This dog had ooze pouring out of her ears and eyes,” she says. “While my husband took our three dogs home, I called out to everyone for assistance — bikers, drivers, joggers, walkers and people with baby carriages. But all averted their eyes.”
Fortunately, members of Dezzy’s Second Chance Rescue were nearby setting up their booth for rescued dogs to be adopted. One member assisted Farber by placing the sick dog in a van and taking it to a veterinary clinic where the dog received life-saving treatment. The dog has not yet been adopted. The plight of this dog has motivated Farber to lobby with the Delray Beach City Commission. She wants to find a way to allow a nonprofit animal organization to have use of the vacant animal shelter building for a yearly rent of $1.
Farber, who has lived in Delray Beach for a decade, is quick to say she is not critical of the city. “I’m looking for a way that a nonprofit animal group can do a much-needed government service that the government currently cannot provide,” she says.
I reached out to city officials regarding Farber’s proposal. Commissioner Mitch Katz explained that the city is doing a complete inventory of all city-owned buildings, including those that are vacant.
“We will not be making a decision on any building until the analysis is done, which should be within a month or so,” says Katz, adding that he wants more information on how such an arrangement between the city and a nonprofit group would be set up.
In an email reply, Vice Mayor Shelly Petrolia wrote, “I would be in support of the city offering a building to temporarily shelter animals by a nonprofit … as long as it received a majority commission vote. I would only agree to consider something like this following an inventory and evaluation of all properties owned by the city, which is currently in the process.”
In the meantime, Farber is maintaining her advocacy efforts for companion animals in need, both here and in Maryland.
“As a lawyer, I’ve worked hard for many years and never took very many vacations,” she says. “I am blessed in many ways and now I want to give back and to use my legal skills to advance issues, like helping homeless animals.”
She is definitely my kind of legal beagle.

Got a pet? In celebration of the release of my newest pet books, I am giving away a personalized, autographed copy of Fit Cat and Fit Dog to a couple of readers of The Coastal Star. How? Easy. Simply email me (Arden@fourleggedlife.com) and tell me, in 100 words or fewer, how your dog or your cat has made your life better. And, if you like, attach a photo. We will pick a cat and a dog winner and share the results in the June issue.