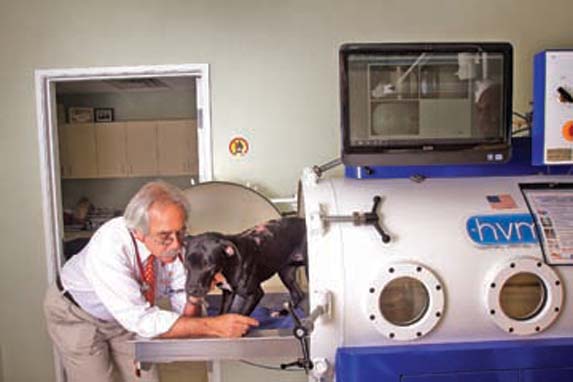 Although Roco, a 3-pound Yorkie-poodle mix, and Midnight, a 40-pound Labrador retriever mix, have never met, they share one commonality: Both owe their lives to Dr. Andrew Turkell, veterinarian and owner of the Calusa Veterinary Center in Boca Raton.

While playing with Max, a Sheltie mix, inside his Vero Beach home in late August, Roco spilled down the stairs, slammed his head against the wooden molding and became unconscious.

“He was lifeless,” recalls owner Kelli George of her 3-year-old Roco. “His eyes were bulging out of his skull. He wasn’t moving and he was barely breathing.”

Kelli and her husband, Scott, rushed Roco to their veterinarian who quickly determined Roco was in critical condition and required advanced care at an emergency veterinary clinic in Fort Pierce. There, he was placed in an oxygen tank to assist his breathing.

But after two days and a bill totaling $1,300, the couple ran out of money. They were desperate to find a veterinarian willing to help save Roco’s life.

In her research, Kelli George discovered Turkell, a veteran in veterinary medicine and a pioneer in using hyperbaric oxygen therapy.  When the Georges brought Roco into the clinic, the dog was barely breathing.

Turkell quickly assessed him and placed him in the hyperbaric chamber. Roco stayed under his care for five weeks (with a couple weekend trips home). Today, Roco is blind in his left eye, but regained his hearing and is back to his playful self.

“I promise you that Roco would not have lived if he hadn’t received the hyperbaric oxygen therapy from Dr. Turkell,” says Kelli George. “If Dr. Turkell had not taken in Roco that day he wouldn’t have survived because we had no other treatment options. Roco became the poster pup for hyperbaric chamber therapy and Dr. Turkell performed all the treatments for free. He saved Roco’s life.”

Midnight is the current miracle dog who received daily hyperbaric oxygen treatments at the Calusa Veterinary Center for about two months.

“Midnight is about 2 years old and a Labrador cross who was found in Miami. This stray had been maliciously burned and left to die,” recalls Turkell. “The local humane society (Justin Bartlett Rescue) brought her to me. Midnight’s body was about 40 percent burned, but after 35 treatments over the past six weeks inside the hyperbaric chamber, Midnight is 99 percent healed.”

During this recovery time, Midnight’s sweet temperament and trusting nature emerged. Turkell’s goal is to completely heal Midnight and assist in finding him a loving, permanent home. And he succeeded.

“Midnight came to us on death’s door — someone had poured acid on him and set him afire,” says Dr. Turkell. “I knew that hyperbaric oxygen therapy would make a difference because burns really respond to this treatment.”

On Oct. 23, this recovered dog was adopted by Nancy O’N eil of Wellington, who quickly renamed her Hope. O’Neil was caring for her mom diagnosed with terminal lung cancer when she saw the report about this dog on the rescue site and felt an immediate connection.

“I felt a connection to this dog I couldn’t explain,” says O’Neil. “She was suffering so much and my family was suffering so much due to my mom’s cancer. While my mom was in hospice care, I would ive updates on this dog’s recovery to her and would tell her that I hoped to get her. I had high hopes. The word, hope kept coming up in my conservations, so it seemed fitting to name her Hope.”

Dr. Turkell hosted an adoption party for Hope and O’Neil in his clinic on Oct. 23.

“She was a sick, dying, skittish animal when she arrived and she left us a well-adjusted, people-oriented, beautiful pet,” notes Dr. Turkell. “For Nancy, who recently lost her mom, one angel left and another angel came into her life.”     Welcome to the high-tech age of veterinary medicine. Hyperbaric oxygen therapy has been employed on people for more than 20 years, but is now just being introduced in veterinary medicine.

Here’s how it works: An injured or sick animal is placed inside the hyperbaric chamber to receive 100 percent oxygen flow to tissues. Inside, a dog or cat is safely and painlessly able to absorb up to four times the normal amount of oxygen, benefiting organs, tissues and body fluids.

Treatments, on average, take about an hour. Inside this ‘den-like’ chamber, many pets relax and often fall asleep, so sedation is rarely necessary.

HBOT is effective in reducing inflammation to hasten post-surgical recovery and to ease arthritic pain or address difficult-to-heal wounds. It is used on pets with hypoxia (too little oxygen) who swallowed water in near drowning or inhaled smoke in house fires. It is being used to enhance tissue oxygenation for pets with pancreatitis, spinal cord lesions, cardiac conditions and certain types of cancer, including leukemia and lymphoma. And, it is used on pets undergoing rehabilitation to regain mobility after surgery to repair torn ligaments as well as recover from snake or spider bites.

Turkell, who has been practicing veterinary medicine for more than three decades, has always been interested in alternative therapies that could complement traditional veterinary medicine. Already credentialed in stem cell therapy, Turkell is among the first veterinarians to use HBOT in his practice.

He credits a client named Edgar Otto who brought in his yellow Labrador named Lancelot Encore for introducing him to HBOT. Together, they have formed a company called Hyperbaric Veterinary Medicine that places these chambers in veterinary hospitals all around the country. In lieu of paying upfront for these chambers, veterinary clinics provide HVM a portion of the revenues generated by using these chambers.

The treatments, on average, cost about $165 with discounts available for purchasing multisession packages. HBOT is now covered by some pet insurance companies.

To date, Turkell has performed more than 1,200 treatments at the Calusa Veterinary Center.

He marvels at the miracles he is able to perform on dogs like Roco and Midnight who might not have been saved a few years ago.  “HBOT has really revolutionized veterinary medicine,” he says.