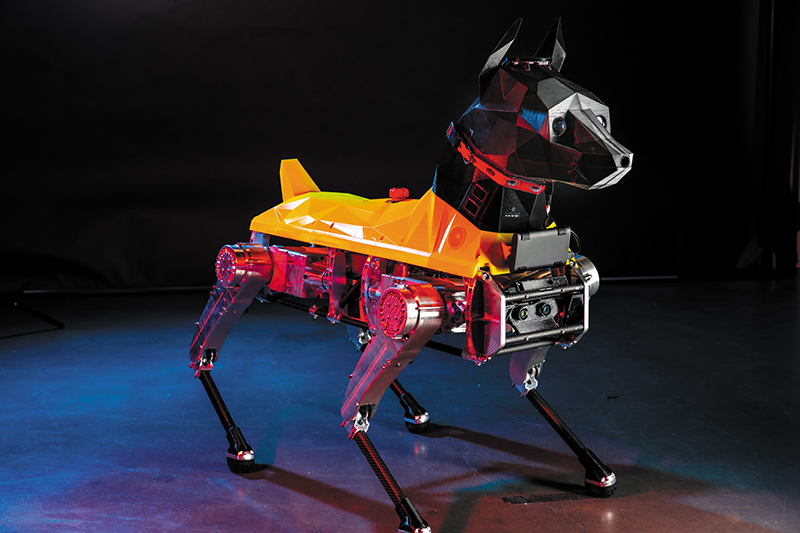 Astro will be programmed for tasks including search and rescue missions and diabetes alerts. Photo provided

Looks like it’s back to the future with a big woof for a team of professors, researchers and students at Florida Atlantic University in Boca Raton.

Back in the early 1960s, The Jetsons took off in popularity. This animated television show centered on a space-age family and featured husband George commuting to work irn a spaceship and taking the family dog, Astro, for walks on a high-in-the-sky treadmill.

FAU is hard at work on its version of Astro, a robodog with real-dog capabilities. This Astro packs sensors, cameras and artificial intelligence to enable it to see, hear and smell.

Thanks to a computerized brain inside its Doberman pinscher-looking head, Astro can also think. Astro quickly mastered basic canine commands like sit and stay. He can also comprehend commands spoken in several languages, detect colors and coordinate search-and-rescue missions with drones.

And best of all, he won’t piddle on your rugs, beg at the dinner table or chew your favorite slippers.

“Astro is the result of collaboration with Martin Woodall, founder of DroneData, and its AstroRobotics division and FAU’s MPCR,” or machine perception and cognitive robotics lab, said Elan Barenholtz, Ph.D., associate professor of psychology and co-director of the lab. “He brought the hardware to us and we are the ones building the brain. In a sense, our job is to bring to life this benevolent Frankenstein.”

Astro is one of a handful of quadruped robots in the world and the only one with a dog head.

Weighing about 60 pounds, Astro is already drawing attention and fans on campus and beyond.

“When we are doing tests with Astro on our breezeway, students stop what they are doing to pull out phones and pose for selfies,” Barenholtz said. “He’s a social media darling.”

Astro is very much in the prototype stage and is not yet commercially available. But Barenholtz anticipates that the next version of Astro will be booted up and learning from experience by the end of this year.

Astro’s eventual mission is to be the ultimate canine protector and trusted companion. He will be able to detect guns, explosives and aid in search-and-rescue efforts as well as be programmed to perform as a service dog for people with physical disabilities and even provide medical diagnostic monitoring.

Other leaders at FAU on this robodog research include William Hahn, Ph.D., an assistant professor of mathematical sciences and co-director of the MPCR lab, and Pedram Nimreezi, director of intelligent software in the MPCR lab.

“My group and I are pushing hard to make FAU become known for artificial intelligence research, making us more like F-AI-U,” Barenholtz said.

Aiding in the development of Astro’s nose capabilities is Emily Stark of Boca Raton. She is pursuing a doctorate in experimental psychology and artificial intelligence.

She also has Nara, a 4-year-old German shepherd mix who has been trained as her diabetic alert dog. Nara can detect low blood sugar levels in their early stages through smell before they reach dangerous levels in Stark.

“Emily is part of the team working on robotic olfaction, trying to replicate what Nara is doing in our machine, Astro,” Barenholtz said. “Diabetic alert dogs are expensive, but if we can eventually make it affordable with machines like Astro, we will.”

He admits he is giddy about the potential robodogs with AI such as Astro can and will do.

“This is a frontier where humankind has not gone before,” he said. “Most of my career has been in human psychology and how the human brain works. But this project is an opportunity to build a brain. Yes, I am super giddy about this.”

Even though his pets are a pair of guinea pigs named Popcorn and Oreo, he is well aware and very supportive of the healing power pets can unleash on people.

“There are lots of studies confirming that pets are good for our mental and physical health,” he said. “You can be grumpy after a bad day at work, but your dog gives unconditional love to you when you walk into the front door. There is a deep soul connection people have with their pets.

“And the experience people have with Astro does feel like he is a sentient being. People will definitely develop emotional connections with these types of systems.”

Battery-operated robopets are already in homes with people allergic to pets as well as faux therapy pets in hospitals and senior living areas.

Two years ago in this column, I spotlighted a pair of robopets named Butterscotch and Rusty that are serving as therapy for residents at the Abbey Delray, a senior living center in Delray Beach.

The battery-operated cat and dog sport realistic soft fur that beckons to be touched and petted. The robopets, manufactured by Hasbro, are programmed to take naps and welcome belly rubs.

More proof that this world is truly going to the dogs (and cats), be they real, battery-operated or AI.