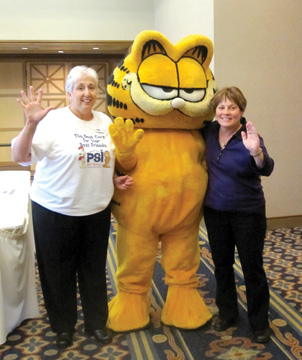 Test your Garfield knowledge with our quiz

Raise your hand if you cruised I-95 back in the late 1980s with a goofy, orange tabby stuffed animal suction-cupped to your car window. It’s OK; I’m raising my hand,
too.


America’s connection to Garfield, the cartoon cat who puts the “C” in catitude, remains strong. We don’t adorn our car windows with suction-cupped toy Garfields any
longer, but more than 263 million people worldwide catch the antics of Garfield
and his goofy canine sidekick, Odie, each morning in their newspapers. It’s the
No. 1 syndicated comic on the planet as confirmed by Guinness World Records.


This Monday-hating, lasagna-loving crabby tabby is really a teddy bear at heart when it comes to bettering the lives of pets (yes, dogs, too) and encouraging
children to read. Recently, I had the opportunity to catch up with Jim Davis,
creator of Garfield, who agreed to be a guest on my weekly radio show, Oh
Behave! that airs on Pet Life Radio (www.petliferadio.com).


Landing an interview with Jim Davis proved to be as challenging as convincing Garfield to do 10 pushups, but the fact that we are both Hoosiers helped. Jim grew up in
Marion, Ind., and I grew up in Crown Point, the home made infamous for John
Dillinger escaping from our escape-proof jail in the 1930s. I also alerted his
publicity folks that I proudly possess an autographed 20th anniversary Garfield
book from Jim’s appearance in 1998 in Boca Raton at the now-closed
International Museum of Cartoon Art.


“Garfield’s favorite activities are eating and sleeping,” describes Jim. “Garfield has the courage to say things that we wish we could. He’s like a human in a cat suit.
And he’s not perfect, but he is definitely cool.”


Since strutting onto the comic pages in 1978, Garfield has become a feline empire with two movies, 11 TV specials, an ongoing cartoon show, website, DVDs and
more. His newest roles: celebrity spokescat for Pet Sitters International and
Professor Garfield at a children’s literary foundation run in cooperation with
Jim’s alma mater, Ball State University.


Garfield was a natural choice for PSI, whose membership of independent pet-sitting businesses numbers nearly 8,000. In addition to his charm, humor and cynicism,
PSI was attracted to the cat’s pampered and deserving attitude.


“PSI is all about educating our members and our members are all about pampering their clients’ pets,” said Terry Chance, PSI marketing director. “Garfield is
definitely an intellectual cat who wants the best treatment possible. We are
delighted about the opportunity to work with the Garfield characters. They are
fun, lovable and extremely well-known among pet owners.”


As for the literary foundation, Jim is happy that Garfield’s antics have been translated into dozens of languages worldwide.


“Readers have told me that their children have learned to read after years of struggle after starting to read Garfield’s comic strip and many people who have moved to
the United States have said that they, too, learned English by reading
Garfield,” says Jim. “I was very happy and honored to create the Professor
Garfield Foundation (www.professorgarfield.org) with Ball State to make reading
fun.”


Garfield headquarters is based at Paws, Inc. in Albany, Ind., where the key to success, according to Jim, is heeding the company’s business philosophy: “Take care of the cat and the cat will
take care of you. Family comes first and most of all, have fun.”


You can catch more about Jim Davis and Garfield by visiting www.garfield.com and tuning into Episode No. 108 of my Oh Behave
show on Pet Life Radio (www.petliferadio.com). Don’t forget your bowl of
lasagna!


Arden Moore, founder of Four Legged
Life.com, is an animal behavior consultant, editor, author and professional
speaker. She happily shares her home with two dogs, two cats and one overworked
vacuum cleaner. Tune in to her “Oh Behave!” show on Pet Life Radio.com and
learn more by visiting www.fourleggedlife.com.