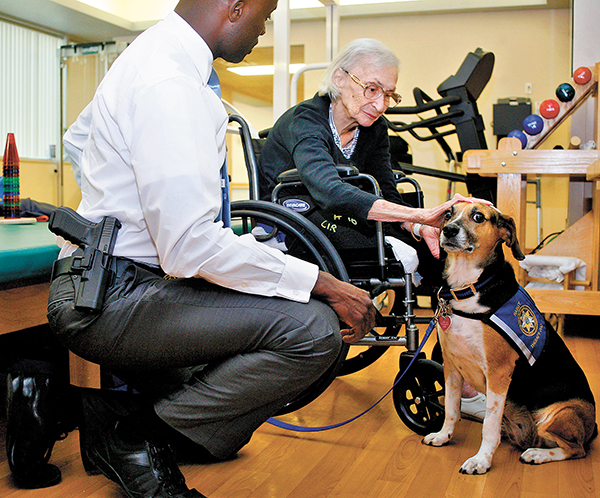 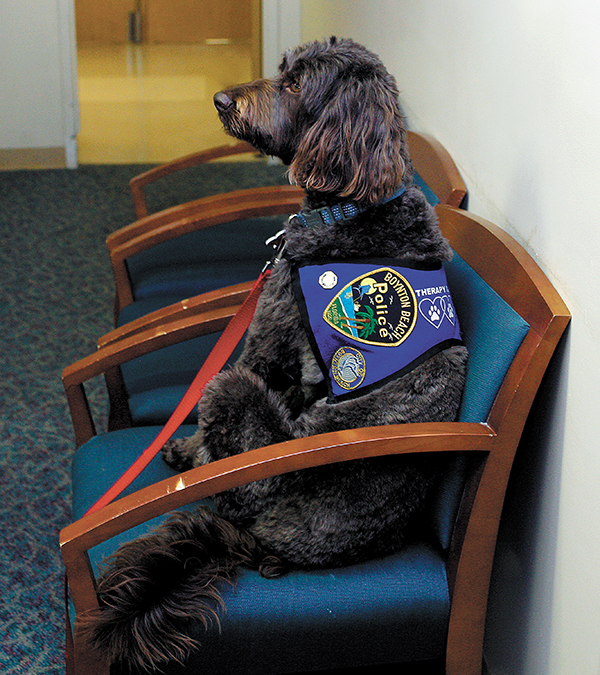 Boone, Boynton Beach’s other therapy dog, led Harley on a tour of the hospital.

The city of Boynton Beach is doubly blessed with canine charm and compassion. And they answer to the names of Harley and Boone.
Boone, a 4-year-old labradoodle, has been on the job since 2013 and mingles with city employees, occasionally attends City Commission meetings and spends a lot of time lifting spirits of children battling illnesses at local hospitals.
Harley, a 5-year-old beagle mix, came on board in September. She reports to the Police Department’s Special Victims Unit and her task is to help children who are victims of abuse or neglect to feel safe and secure when being interviewed about criminal cases by detectives and attorneys.
Harley represents a new breed of therapy dogs starting to be specially trained all over the country to help law enforcement, legal and health officials reach out to help people of all ages cope with stress, fear and traumatic experiences.
Only two months into her role, it appears that Harley is perfect for this mission.
She received training at the Paws & Stripes College at the Brevard County Sheriff’s Office. Just before graduating, she was paired with Boynton Beach Detective Astrel Labbe, who traveled up to Brevard County to undergo training with this former shelter rescue.
Labbe has been with the Boynton Beach Police Department for 15 years, spending the past decade in the Special Victims Unit, where he handles child neglect and abuse cases as well as sexual battery cases involving children and adults.
“Harley is very perceptive, very quiet and very helpful toward children who are stressed by these circumstances,” says Labbe, a former social worker. “Some of our cases involving children can be very challenging and it can be very difficult for some of them to open up and talk. But the kids love and trust Harley. She welcomes their hugs.”
Harley’s quiet, even-keeled nature is an asset to kids in need. Children are in a living room-like space where they are interviewed by police, forensic specialists and other officials. When Labbe enters the room, he quickly introduces Harley to the child.
He gives each child the option of having Harley with them during the interviews and when necessary, during medical examinations.
“A lot of the kids pick the option of having Harley with them,” he says. “In one of our first cases with Harley, a 5-year-old girl who was an alleged victim of child abuse was being very quiet. I then introduced her to Harley. She started petting Harley and then started to answer my questions.
“Harley is an extra special tool we can use during our investigations. She is a great dog.”
He spends 24/7 with Harley. At home, Harley hangs out with Labbe’s personal dog, Leah, a 6-year-old boisterous miniature pinscher.
“Leah likes to yap, especially on walks, and the two get along pretty well,” notes Labbe. “Once I remove Harley’s vest at home, she knows she is off duty and is more playful than when at work.”
Boone, on the other hand, shines as the city’s canine goodwill ambassador. He was undergoing extensive training to be a service dog by the Dogs for the Disabled organization in Martin County when he injured his anterior cruciate ligament in a rear leg. He was released from the program and then adopted by city employees Wally and Debbie Majors.
Wally Majors is the director of recreation and parks administration while his wife serves as the city’s grant and Americans with Disabilities Act coordinator.
“Boone comes with me every day to work and on weekends, Debbie and I take him to Bethesda Hospital where he meets with patients,” says Majors, now in his 31st year with the city. “Boone has proven to be too much of a gift to just be a pet. Before he was released, he had learned more than 80 skills, including turning on lights and putting socks in a laundry basket.”
On occasion, Boone and Harley get to combine their canine talents in public appearances. The goal is for Boone to show Harley “the ropes” in putting her therapeutic talents to use at hospitals and schools, says Wally Majors.
“Harley is definitely more quiet and reserved — perfect for her mission to work with children involved in something traumatic to help them feel more comfortable in communicating with police officers,” says Majors. “Boone is very energetic, playful and loves to chase a ball. When he visits kids in hospitals, he brings smiles to their faces when he performs a bow, waves or does some other trick.”
Boone’s good nature also seems to be embraced by family members visiting terminally ill patients as well as hospital nurses.
“One-third of Boone’s friends are nurses and yes, he has his own Facebook page,” said Majors, ushering me to view it (www.facebook.com/BooneMajors). “More and more people are recognizing the incredible impact therapy dogs like Boone and Harley have on people and how they help them deal with stress in a more manageable way. The city of Boynton Beach is very lucky to have these two dogs.”
Paws down, I heartily agree.