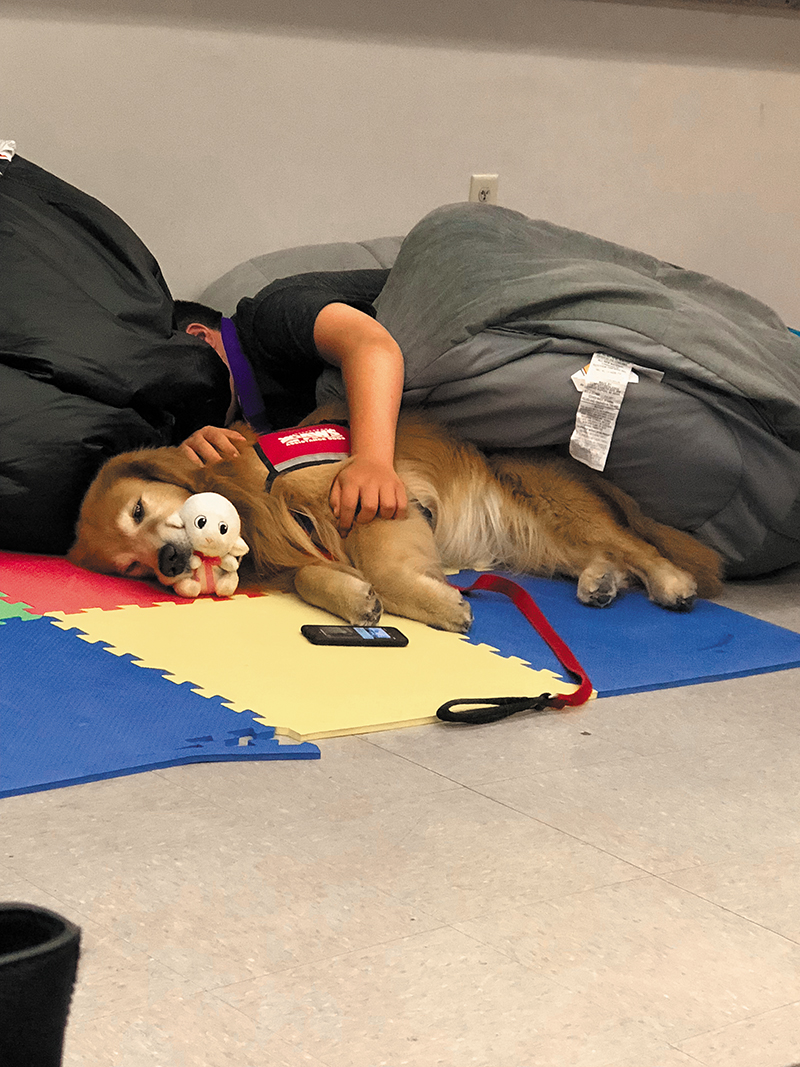 The phrase “heart dog” is often bestowed upon a once-in-a-lifetime dog that connects deeply with its adopted person. I had such a dog in Chipper, my husky-golden retriever mix who died two years ago but remains vibrant in my memories and my heart.

But I have never met any dog like Kol, an 8-year-old golden retriever from Boynton Beach.

The morning after a gunman with an assault rifle killed 17 and wounded more than a dozen at Marjory Stoneman Douglas High in Parkland, this certified therapy dog arrived to the shattered campus with his pet parent, Jane Eisenberg.

“On Feb. 14, I saw the news of the school shooting and I said to my husband, Bruce, ‘I am going to that school tomorrow with Kol,’ ” she recalls. “I was not sure if they would let us in. I took a gallon jug of water and treats for Kol along with his therapy ID and veterinary medical records.”

Even though this duo for years has visited patients in hospitals and hospice care as well as residents in nursing homes, victims of domestic abuse, and college students cramming for exams, Eisenberg did not know what to expect at Stoneman Douglas. She knew the school staff and students could benefit by Kol’s amazing ability to take in the grief of others and generate gentle joy.

“We got out of the car and I did a little brushing of his coat,” she says. “I took a deep breath and I remember saying to Kol, ‘OK, let’s do our magic.’ We ended up spending seven hours there. I had to force Kol to take a break and to take a drink. It was as if he was telling me that he was needed.”

They returned every day until school ended for the summer, spending some time in Room 723, where Suzanne Camel taught math.

“The comfort that Kol provided to my students and me after what happened on 2/14 was immeasurable,” says Camel. “We were all having a great deal of difficulty just walking onto the campus. Kol’s calming and soothing demeanor allowed us to have a sense of security which enabled us to make it through the school year together.”

Kol’s canine compassion to students and staff has not gone unnoticed. He, along with four other dogs, recently received the prestigious AKC Humane Fund Awards for Canine Excellence.

“Whether saving lives or providing comfort, these five ACE recipients serve as testimony to the immeasurable ways our canine companions touch our lives every day,” says Doug Ljungren, president of the AKC Humane Fund. “Each dog’s loyalty and dedication to their work and community is an inspiration to dog lovers everywhere.”

Every school day from Feb. 15 until the first week of June, Kol and Eisenberg arrived by 7 a.m. and left about 40 minutes before the final bell.

“For the first couple of weeks, it was more about the healing and unconditional love he could offer,” says Eisenberg. “Kids would come over, pet him and cuddle with him. Some would talk to him as they rubbed his coat. He could smell someone who was really struggling and he would want to go over to them.”

Kol even earned his own student ID badge. He would walk the halls with his favorite stuffed, plush toy in his mouth, sparking smiles and laughter. He posed for hundreds of photos with students and teachers.

“He learned how to pose by backing up to students and leaning back as if he knew they were taking selfies,” laughs Eisenberg.

When school ended for the summer, Eisenberg sensed Kol was a bit down about not making the daily trip.

“Each morning, he would look at me as if to convey, ‘Well, are we going? Why are you not taking your bag and my leash? I’m ready,’ ” says Eisenberg.

The friendships formed at the school remain as Kol and Eisenberg now make regular visits to the school this fall.

But gracious Kol is a dog of many talents. He was a champion show dog, earning grand champion bronze at 14 months as well as titles in obedience and therapy.

“Kol is a dog I can take anywhere,” says Eisenberg. “He is extremely adaptable to many situations and is very intuitive. Throughout this Stoneman experience, I have learned just how lucky I am to have this very special dog to be able to share with others and to bring some happiness to people in need.”

Each honored dog earns one year of free pet insurance, and the pet parent receives $1,000 to donate to a charity of his or her choice.

To learn more about the dogs that will be honored at the AKC Humane Fund Awards for Canine Excellence ceremony Dec. 15-16 in Orlando, visit akchumanefund.org/ace-awards. And to follow Kol’s activity, check him out on Instagram at Kolthetherapydog.