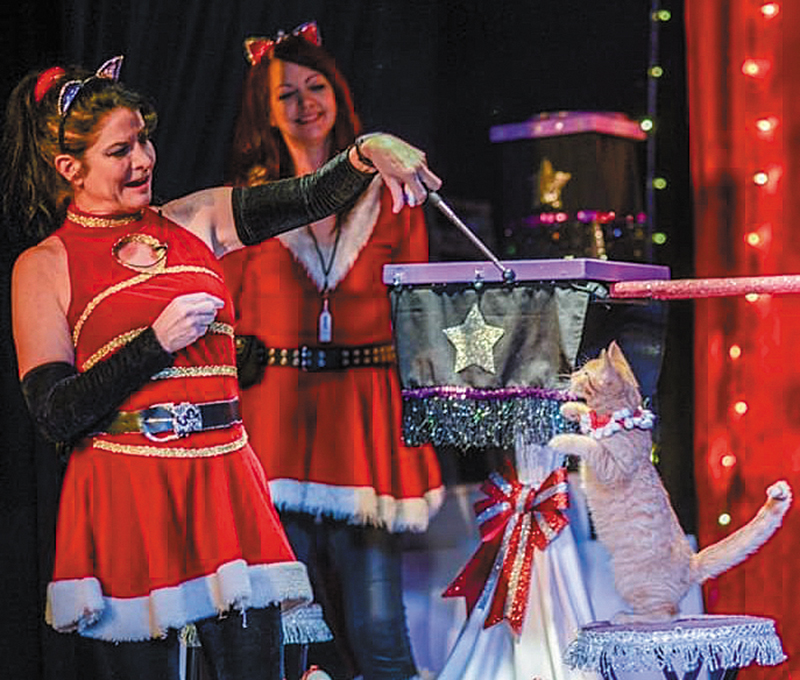 Arden Moore’s newest pet, Rusty, is an adopted cat who used to perform on stage with animal trainer Samantha Martin and the Amazing Acro-Cats. Photo provided by Suzanne C. Grim

With the exception of my orange tabby, Casey, whom I selected from a shelter five years ago, every cat and kitten in my life since childhood has shown up unexpectedly.

This is in contrast to the dogs I’ve adopted. Each one — except Cleo, who was found wandering the streets with no ID tags or microchip — was thoroughly vetted by me and temperament tested before being welcomed into the family.

For those of you who have cats and dogs, does this sound way too familiar?

So, why am I surprised that I flew home from a major conference for shelter workers and cat rescuers in January with a new orange tabby kitten named Rusty?

This is no ordinary kitten. Sure, like far too many young felines, he had a crappy beginning. He was found as an orphaned, hungry kitten in a dumpster in Georgia. He needed two medicinal baths to rid the fleas covering his body. He had to be bottle fed and kept warm in a makeshift incubator to regain his health and strength.

But talk about a cat comeback. By 6 months, this loves-to-learn, sweet little guy was performing on stage with renowned animal trainer Samantha Martin and the Amazing Acro-Cats in New Orleans for three weeks in December.

In mid-January, Martin brought Rusty and some other members of her feline troupe to The Acatemy conference in Dulles, Virginia, where we both were speakers. My talk was on “Fear Free Pets” — how to use low-stress handling on kittens and cats in homes, veterinary clinics, shelters and in vehicles. I also taught a veterinarian-approved cat first aid/CPR class with the help of pet safety cat Casey, who has been my teaching assistant for nearly five years.

Martin and I have been friends for many years. She has a knack for finding talent in strays and shelter animals. Her go-to training tools are a target stick and a clicker, plus plenty of treats and positive-reinforcement praise.

Clicker training involves “marking” a desired behavior like a sit or sit up with pressing down on a metal clicker as soon as the act is done and then immediately handing over a treat and eventually pairing that act with a phrase, such as “Good sit.”

Targeting involves using a long stick with a round end to direct an animal to move from one place to another. In the case of Rusty, it meant he sat on a mark on stage before a sold-out audience and then leaped through a hoop and landed on another platform. Again and again.

So, at the conference, Martin shared her dilemma. She already has a pair of talented 2-year-old orange tabbies in her troupe and needed to find a home for Rusty that would continue to challenge his brain and fuel his desire to learn.

“Arden, I know all that you do with Casey all around the country,” she began. “I know that Rusty would be a great addition to your classes and your home. I just don’t want him to go to a home where he would sit around all day and be bored.”

That was all it took for me to say yes. It is rare to adopt so young a kitten who has so many talents and social skills. Another bonus: Rusty really loves other animals. He quickly made friends with Casey as well as my dogs, Kona and Bujeau, and our senior cat, Mikey.

About 10 days after adopting him, I brought Rusty to one of my Pet First Aid 4U classes — along with my seasoned team of Kona and Casey. Students were able to practice proper hand placement on Rusty to perform simulated kitty CPR and even wrap his front leg in our how-to-bandage-a-bleed demo. Yes, he purred the whole time.

He also came racing my way when I whistled.

So, what are the plans for this young, gotta-perform feline? I will continue to expand his trick repertoire and expose him in positive ways to all types of scenarios, such as riding in a pet stroller, walking on a leash and meeting people of all backgrounds and accepting being held.

When he turns 1, I hope he will join Kona and Casey and become a certified therapy pet who will entertain kids in schools and animal shelters, as well as residents in memory care centers.

Rusty is no ordinary kitten and my promise to him is that he will live an extraordinary life.

Please share how you came to adopt a special cat or dog and how that adoption has enriched the pet’s life and your own. Send them to me at fourleggedlife@gmail.com.

More about the Amazing Acro-Cats
This circus troupe of domestic cats — plus a groundhog, a few rats and other small animals — was founded by animal trainer Samantha Martin. The group also includes the Rock Cats, a feline musical band. Based just south of Atlanta, the Amazing Acro-Cats tours and performs throughout the United States. This is a nonprofit group that donates to animal shelters and lives its motto: “Saving Cats One Click at a Time.” Find more information and show dates at www.circuscats.com.