South Inlet Park is a county-owned recreation area next to the Boca Raton Inlet. ABOVE: Eugene Katal and his son Victor try fishing from the jetty. BOTTOM LEFT: Cousins Rosanne DiFilippo and Frank Kopa soak up some sun on the beach.  Photos by Tao Woolfe/The Coastal Star 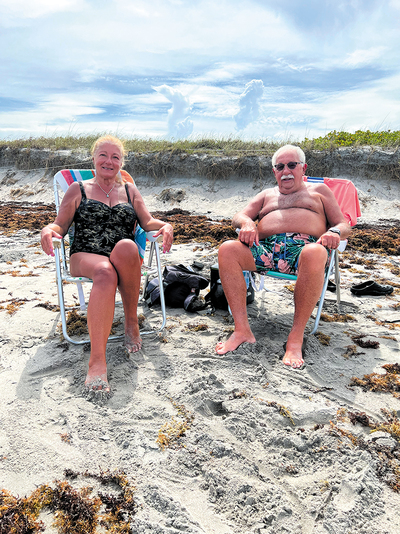 South Inlet Park, one of Boca Raton’s smallest, quietest oceanside parks, offers a laid-back day at the beach for families and serenity seekers.
It’s just south of Boca’s spectacular 2-mile oceanfront recreation area, but the humbler South Inlet Park — which is tucked alongside the Boca Inlet — feels almost undiscovered.
Among those who appreciate the charms of the county-operated park is Frank Kopa, who lives in Boca Raton during the winter months and returns to the New Jersey shore for the summer.
He and cousin Rosanne DiFilippo, nestled deeply into their low-slung beach chairs one recent afternoon, talked about how the beach had changed in the last 40 years.
“I don’t remember these big condo buildings all around,” said DiFilippo, who first visited South Inlet Park when she was about 20. “There used to be more dunes — and trees.”
The overpowering smell of baking seaweed seemed not to faze the cousins, whose bodies were golden brown.
“My skin is used to it. I don’t even use lotion,” Kopa said. “We’re beach freaks, here every day.”
DiFilippo said she likes South Inlet Park because it is more natural and less crowded than other area beaches.
The park offers barbecue grills adjacent to five small pavilions with picnic tables; a play area for kids 5 to 12 years old; and a jetty along the south side of the inlet that is a popular fishing spot.
Eugene Katal, accompanied by his son Victor, 6, stood on the rocky jetty and repeatedly cast his line into the wake of passing boats.
As late afternoon clouds rolled in from the west, father and son, their baskets and buckets empty, packed up their gear.
“It’s my first time here and my first time fishing,” Eugene Katal said with a shrug. “It’s a very nice park.”
The park’s largest pavilion is the last architectural remnant of the 1930s Cabana Club — a semicircular group of cabanas, card lounges and dining rooms that was demolished in 1980 to make way for the Addison on the Ocean condominium.
The pavilion, which originally served as a sheltered area for club guests exiting their cars, was preserved and moved to South Inlet Park in 1981. The porte cochere (covered entrance) is now on Palm Beach County’s Register of Historic Places. 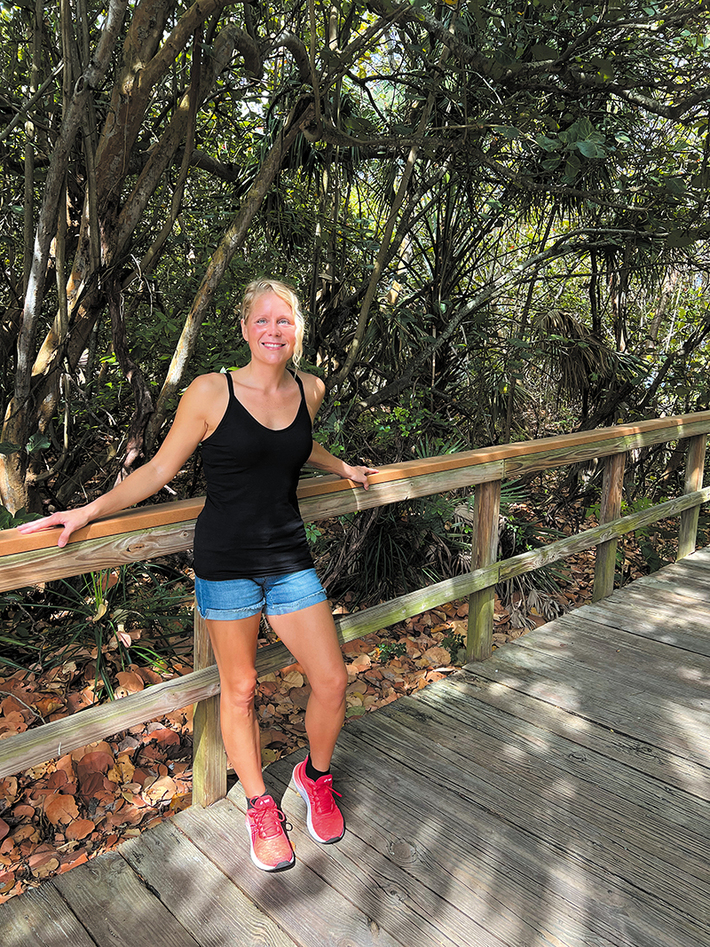 Amanda Engelhart takes a break on the park’s boardwalk.

The park has tree-covered wooden walkways through the scrub, and shady coves with benches where beachgoers can get out of the sun. Amanda Engelhart had stopped along a walkway to knock the sand off her red sneakers and appreciate the surrounding little forest.
“I think this park is beautiful, cozy,” she said. “There are areas in the water where you can see tropical fish and coral, and it’s always clean.”
Engelhart, of Minnesota, said she was traveling and stopped for a long stay in Boca Raton. She goes to South Inlet Park almost every day, she said.
“This little spot is well preserved and incorporates the city with nature,” Engelhart said. “It’s a good place for me to find solitude. It’s a good place for all.”

South Inlet Park at 1100 S. Ocean Blvd. is open from sunrise to sunset seven days a week. Dogs are not allowed on the beach. Balloons endanger sea turtles and are prohibited. Parking costs $3 an hour weekdays and $4 an hour on weekends and holidays. 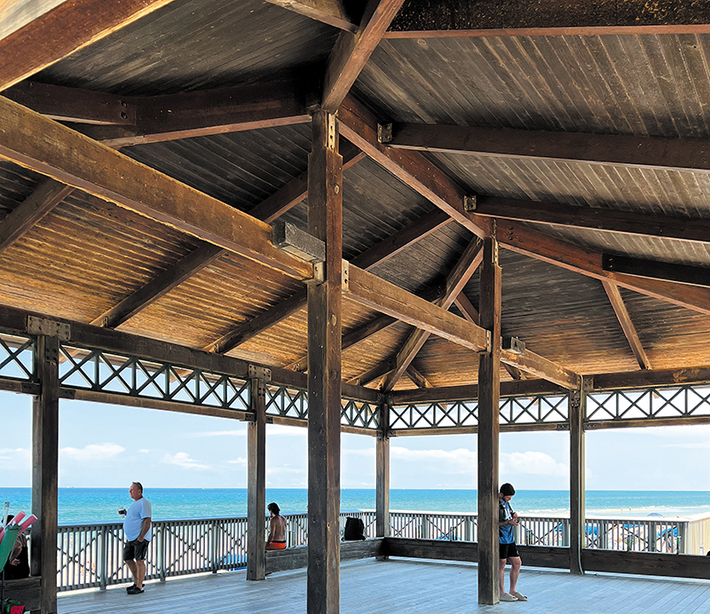 South Beach Park
Boca Raton’s other “south” park is the southernmost point of the city’s renowned coastal recreation area.
South Beach Park is known for its big, shady pavilion at the intersection of A1A and Palmetto Park Road; its walking paths shaded by sea grape trees; and its white sand beach.
“South Beach has been, and remains, one of Boca Raton’s most visited and utilized parks,” said Michael Kalvort, the city’s recreation services director. “Over the course of the pandemic, we saw unprecedented attendance and usage by our citizens as they looked to recreate, get healthy, and enjoy a moment of respite during these interesting times.”
Most of the 24.5-acre park is owned by the city of Boca Raton, but a 6.5-acre parcel within the park is owned by Palm Beach County, said Anne Marie Connolly, Boca’s communications and marketing manager.
About 50 years ago, the city entered into a dollar-a-year lease agreement with the county allowing the city to use the land as a park.
The city recently renewed the lease for 20 years, although the price has risen to $10 a year, Connolly said. The city has an option to twice renew its lease in the coming decades.
“This allows for our residents to utilize the parkland as we ... continue to maintain it,” she said.

South Beach Park is at 400 N. State Road A1A. Hours are 8 a.m. to sundown, seven days a week. No fires, camping, alcohol or smoking. Lifeguards are on duty from 9 a.m. to 5 p.m. during standard time, and 9 a.m. to 6:30 p.m. during daylight saving time. Surf fishing is allowed, but not in designated swimming areas during normal swimming hours. Pets are not allowed. On-street parking is $2 an hour. All-day parking for South Beach Park, and adjacent Red Reef Park, is $25 for cars and minivans.