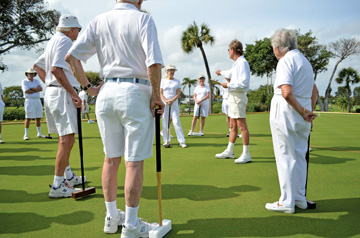 You could easily drive down A1A just south of Briny Breezes and not have inkling about the existence of the St. Andrews Club. There is a small sign, if you look closely, but well-manicured ficus hedges and swaying palm trees mostly hide the 27-acre club on both sides of the road.
Members say the seaside gem is the best-kept secret around.
The bonanza of amenities is something to boast about, after all. The club has a challenging par-three 18-hole golf course designed by Pete and Alice Dye; three Har-Tru tennis courts; a world class croquet lawn; a modern fitness center with fetching views of the golf course; a geothermal heated pool; an herb garden and nursery; and a private beach equipped with lounge chairs and cabanas. A gazebo along the Intracoastal Waterway is perfect for weddings or watching the holiday boat parade.
Oh, and that golf course is also a designated Certified Audubon Cooperative Sanctuary, one of 800 in the world.
The two-story clubhouse, renovated and expanded in 2006-2007, provides a sunny atmosphere for members to dine, dance, hold fashions shows and club meetings, hear lectures, play bridge or backgammon, or take classes like Pilates or water aerobics (in the pool outside the dining room). There’s no shortage of comfy chairs where members can curl up with a book and a quaint lending library.
Seven men of means, most Scottish-Canadians who had made their mark in the business world, founded the private club at 4475 N. Ocean Blvd., 40 years ago. Their names: Charles F.W. Burns, J.M. Richard Corbet, Stewart B. Iglehart, Leonard  G. Lumbers, George E. Mara, Karl E. Scott and Donald G. Willmot.
Members pay tribute to the founders’ Scottish roots during an annual Founders Day celebration, when bagpipers march from the beach to the clubhouse for a celebration.

The book on St. Andrews
Bob Hopkins, a Connecticut resident who, with his wife, Joan, has a condo at St. Andrews, wrote a book (A History of The St. Andrews Club) about the club, a process that took him about 3½ years.
“The challenge was trying to get the correct stories,” Hopkins said. “All of the seven founders had died by the time I started to write. You had to piece it together. If I could get two or three people who said the same thing, that seemed right.”
He supplemented the oral reports with a few old newspaper clippings and early newsletters from the club.
According to Hopkins, Mara, Willmot and Scott were key founders. They were, he wrote, “closely associated in both their business and social lives.” Mara brought up the idea of developing land in Florida by creating a top-notch club and found the beachfront property, then owned by Iglehart.
Construction began in 1972. Club cars were sent to meet early members as they arrived by trains or planes, and helicopter service was available from the airports. The landing pad was where the croquet lawn is now.
Scott, an American who had worked in Canada and lived in the Country Club of Florida when the club was being built, became the club’s first president. He wrote the following in a welcome letter to new members:
“We have sought to build a community of congenial people and provide them with the facilities and services that ensure full opportunity for happy and enjoyable days of carefree living.”

Relaxed atmosphere
Tennis and croquet pro David Bent, who has been at St. Andrews since 1980, knew the founders well.
“They were fantastic people,” he said.
A highly ranked croquet player who competes on the international level  (and makes and sells mallets), Bent was on hand when the croquet lawn was built in 1998. “I didn’t know how serious a game it was,” he said. “It’s very serious. You think of croquet as a backyard game with wire hoops, but the equipment is very different.”
Asked how St. Andrews had changed over the years, Bent said, “fortunately, not much. It’s an easy-going group of people. It’s more of a social club than a golf club or a tennis club. There’s a much more relaxed atmosphere. It’s a small, really friendly crowd. They are through climbing the ladder, so to speak, and at the stage where they can come an relax here.”
Karl Scott, son of the founder with the same name and an associate member, said that after his dad retired and moved to Florida his father became “the man on the spot” for the founders, most of whom lived in Canada.
“It took seven or eight years to build and it was not a money-making venture,” he said, due largely to the troubled economy at the time. But the project did turn out to be “a gem on the beach,” he said.
A Realtor with an office on club property, Scott said he has nine listings currently for the club, which is typical. Current listings range from $295,000 for a 1,400-square-foot two-bedroom, two-bath condo to $775,000 for a 1,600-square-foot three-bedroom, two-bath unit. The condos become available when owners die or move to a retirement home. The club has five condo associations, 136 homeowners and 268 members (some live off campus).

Fans of service
Members have great appreciation for staff, from waitresses and valet parkers to golf and tennis pros.
Take lifeguard Connie Case, for example. She encouraged the club to add lounge chairs and cabanas at the beach, and started a popular bonfire on the beach program, complete with marshmallow toastings. Another Case proposal, adding food and beverage service on the beach, has become a big hit.
“What other club has that?” asks resident member Nancy Barlow.
“She (Case) plays guitar at the bonfires,” said Barlow. “She plans a lot of the kids activities, too. Our granddaughter likes the swimming lessons.”
Sheila McDevitt, a member who lives off campus in Delray Beach, met Barlow when they both lived at St. Andrews. They became fast friends and enjoy meeting at the club for lunch, bridge, and other social events.
“Its’ such a fun and friendly place,” Barlow said. “The food is great and so are the people. We’re very inclusive. Everybody knows everybody.”
McDevitt agrees. “Of all the clubs we’ve been to, this is the friendliest.”
Then, of course, there’s the service. Who wouldn’t, for example, enjoy having his car washed once a week (twice for those who live on the ocean side of the road), or having his apartment checked regularly when owners are gone for the summer months?
But it’s the people (members, their families and staff) that make this club special, said Geoffrey Hume, the club’s general manager for seven years. “There is genuine care by all who call St. Andrews home and a place of work. Having the opportunity to work in this slice of paradise is something I look forward to everyday.”
Sounds like the founding fathers accomplished their
goal.