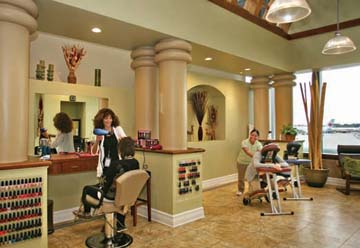 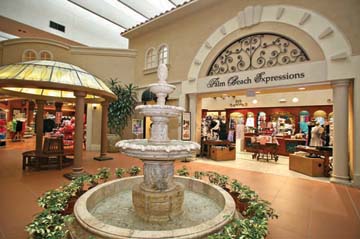 Terminal upgrades include new shops, restaurants and a fountain.

Before you fly the friendly skies, you’ll be spending some time at the airport, where things are changing all the time. Here’s the latest news at three nearby international airports:

Airports are constantly evolving to meet the needs of passengers and those who come to see them off or greet them upon arrival. New flights, services, restaurants and shops and even new positions are being added to streamline travel time.
“There are so many new and exciting things happening at Palm Beach International Airport,” said Stephanie Richards.
New herself, Richards was hired in 2013 as PBIA’s first marketing director.
“The website (www.pbia.org) has been completely redone, along with a full branding change including a new logo,” she said.
Richards is plugged into social media, too. When a local radio personality recently posted a gripe on Facebook about the worn-out upholstery on chairs in a waiting area, Richards wasted no time is responding, also on Facebook.
“You are 100 percent right, the fabric is already ordered,” Richards replied. “The guys are making their way around the terminal reupholstering. It’s like laundry, it’s never done. By the time they get them all recovered, it is time to go back to the first ones and recover them again.” She even posted pictures of fabric swatches.
What else is new at PBIA? 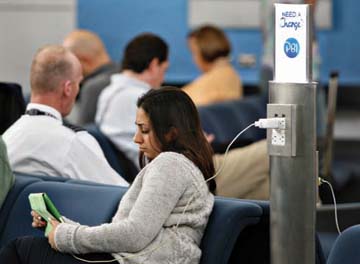 ABOVE: PBIA has installed charging stations for electronic devices at each gate.

To keep passengers’ electronic devices (laptops, smart phones and tablets) powered up, PBIA installed charging stations at each gate.
Also new last year is a loyalty program, called “Thanks Again” (thanksagain.com/pbi/) to reward passengers with airline miles for every dollar they spend shopping, dining or parking at the airport with a registered credit or debit cards.

Keeping your shoes on
TSA PreCheck, which allows low-risk travelers to experience faster, more efficient screening at participating U.S. airport checkpoints for domestic and international travel, became available at PBIA in 2013.
PreCheck permits some passengers to keep belts, shoes and light outerwear jackets on when going through the checkpoint. Other passengers will still have to take off their shoes, Richards said.
Passengers who are eligible for TSA PreCheck include U.S. citizens of frequent traveler programs invited by participating airlines, U.S. citizens who are members of a U.S. Customs and Border Protection Trusted Traveler programs, Canadian citizens who are members of CBP’s NEXUS program and passengers traveling on a participating airline who TSA proactively prescreens using its Secure Flight system.
Those who aren’t eligible by being invited by an airline participating in the program, or by applying for membership in the U.S. Customs and Border Protection’s Trusted Traveler Program, can apply online (www.tsa.gov/tsa-precheck/application-program).
To qualify, you need to complete the online application. Pay an $85 fee, verify your identity and provide fingerprints at a TSA PreCheck enrollment center. If approved, you remain eligible for five years before having to reapply.

In-air and on-land service
New air service from PBIA to San Juan, Puerto Rico, the Bahamas, and New York LaGuardia began in 2013, as did a nonstop (American) flight to Los Angeles. Additionally, NetJets, a Berkshire Hathaway charter company, opened a private terminal at PBIA. More than 10,000 NetJets flights come in and out of the airport every year. The facility offers a children’s entertainment room, conference and business center, flight planning facilities, crew lounge and six acres of paved ramp and car-parking area.
PBIA recently opened Comfort Zone, a full-service spa offering haircuts, manicures and pedicures and massage, all good news for those seeking a little stress release before boarding. A putting green (above) and the KidsZoo play area (left) at Palm Beach International are not new to the airport but helped earn PBIA the designation of ‘Airport With the Most Unique Services.’ 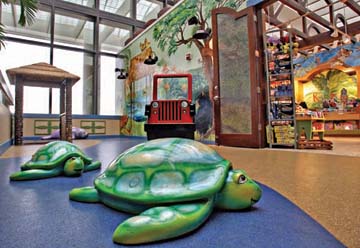 The popular little putting green (near Sam Snead’s Tavern), pool table, KidsZoo play area and rotating art exhibit are not new. But those features earned PBIA a designation as the “Airport With the Most Unique Services” by the Airport Revenue News in 2013 in the small airport category.
Not new last year, but still popular, is PBIA’s cell phone parking lot for those waiting to pick up arriving travelers. Another perk airport-goers make good use of is being able to pay for parking with their SunPass.

Fort Lauderdale
Two of the biggest news items at the Fort Lauderdale-Hollywood International Airport (www.fll.net) were the addition of numerous destinations and the opening of three new restaurants.
Greg Meyer, an airport spokesman from the Broward County Aviation Department, said JetBlue added flights to Medellin, Colombia; San Jose, Costa Rica; Lima, Peru; Worchester, Mass.; and Port Au Prince, Haiti.
Also new in 2013 was a United flight to San Francisco, Silver Airways service to Orlando, and a Frontier flight to Trenton, N.J.
In November, Norwegian Air Shuttle (a new airline for FLL), added service to Stockholm, Copenhagen and Oslo, and on July 4, Norwegian will start a nonstop service to London.
Three new restaurants opened in the food court in Terminal 3 — Jamba Juice, Pei Wei and Steak ’n Shake.
A TSA PreCheck express lane has also been added at Fort Lauderdale-Hollywood International Airport, offering expedited screening to select travelers.
A new runway is under construction, but that shouldn’t be a problem for those driving to the airport unless they travel south on U.S. 1, said Allan Siegel of Broward County Aviation. “This ramp is closed,” he said, “so drivers have to travel north on U.S. 1, then make a U-turn to travel south.”

Miami
At Miami International Airport (www.miami-airport.com), 36 new automated passport control kiosks were added in the Customs and Border Patrol Protection area. MIA is one of three U.S. airports using the new technology, which allows U.S. and Canadian citizens to have their passports processed in less than two minutes via a self-service kiosk instead of waiting in line for a CBP officer. In fact, every four kiosks do the work of one CBP officer, making the 36 kiosks the equivalent of adding nine new CBP officers, said March Henderson, media spokesman for the Miami-Dade Aviation Department.
Passengers who fly American, Delta and United Airlines can participate in the TSA PreCheck program.
Henderson said that several new flight routes were added in 2013 or will be added in 2014.
American Airlines launched service in November to four new destinations: Cozumel, Mexico; Curitiba and Porto Alegre, Brazil; and Milan, Italy.
A new daily service to Brazil, which makes a stop in Curitiba before continuing to Porto Alegre, brings the number of Brazilian destinations served by MIA to nine — more than any other U.S. airport.
New service to the Caribbean resort island of Cozumel represents MIA’s fourth destination in Mexico, which ranks second to Brazil among MIA’s top international markets, with more than 1.2 million passengers annually.
American’s new daily nonstop service to Milan marks the airport’s 14th European destination, and low-cost carrier Jetairfly is set to launch MIA’s 15th route to Europe in April with nonstop service between MIA and Brussels.
American inaugurated service to San Diego in 2013, making this the third destination in California with nonstop service from MIA in addition to Los Angeles and San Francisco.
In October, WestJet launched nonstop service to Calgary, Canada.
MIA gave its military hospitality lounge a renovation last year. The facility has a main lounge, two private rest areas, a children’s play area and computers for servicemen and women to access the U.S. Military database with their military I.D. Complimentary refreshments and computer, Internet and telephone service are also offered for veterans and active duty military members and their families.
When it comes to shopping and eating, new options were also been added in October: GNC, a specialty retailer of health and wellness products, and the Clover Irish Pub, which offers a taste of the Emerald Isle.