Matthew Simmons of Boca Raton plucks trash from clumps of seaweed along the shoreline. Simmons and his 12-year-old son, Hayden, were among the 30 or so volunteers who turned out for the monthly cleanup. Photos by Willie Howard/The Coastal Star 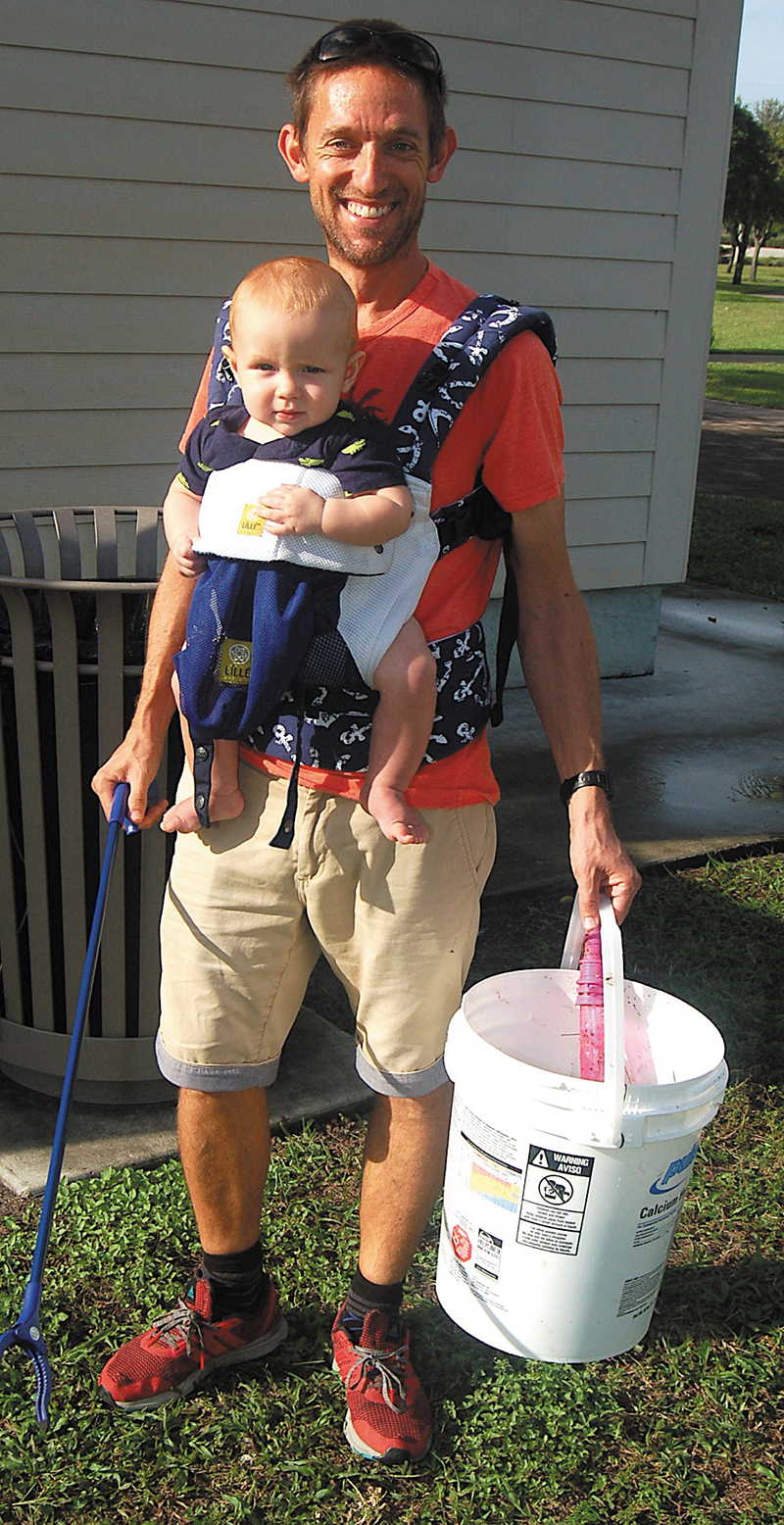 Sean McKillop of Boynton Beach and Noah, his 8-month-old son, removed trash together during the Dec. 9 Boynton C.A.R.E.S. cleanup at Intracoastal Park in Boynton Beach.

Homer said more than 30 restaurants have donated gift cards, given to volunteers as raffle prizes at the end of each cleanup.
Most Boynton C.A.R.E.S. cleanups are the first Sunday of the month at Intracoastal Park — an attractive waterfront park at 2240 N. Federal Highway.
Anyone willing to help can simply show up. Cleanups last about 45 minutes, followed by a brief discussion of environmental topics and raffles.
About 30 volunteers attended the Dec. 9 cleanup, including 18 clients from the Bright Futures Treatment Center in Boynton Beach.
In addition to the usual scraps of plastic packaging, Styrofoam, aluminum cans, cigarette butts and glass bottles, the Boynton C.A.R.E.S group found the remains of a small inflatable boat, several boat fenders, large wooden planks, heaps of rope and a black handgun wrapped in a plastic bag.
The handgun was treated as real until a Boynton Beach police officer determined that it was plastic.
Volunteer Charles Droog of Boynton Beach said the previous month’s cleanup generated a backpack filled with jars of pills, a packed duffle bag and a car door.
Homer, who owns a waterfront home near Intracoastal Park, said he became emotional at the Dec. 9 event when raffle prize winners donated back their restaurant gift cards and free pizza certificates so other volunteers could win them.
“We have a great group of volunteers who consistently attend each month,” Homer said. “People are becoming more conscious and aware about pollution and what it can do.” Program introduces children to pier fishing
Aspiring anglers ages 7-12 can learn the basics of fishing along with casting and knot-tying and fish conservation at the Loggerhead Marinelife Center’s Kids Fishing Program.
The Saturday program runs from 9 to 11 a.m. through the end of April. The cost is $10 per angler. Parents or guardians must attend. Adults can fish, too, for a $5 fee, after the group reaches the Juno Beach Pier.
The Kids Fishing Program meets at the Loggerhead Marinelife Center in Juno Beach, where staff instructors and volunteers teach proper fish handling, how to measure fish and how to tie basic fishing knots.
Casting practice follows the sit-down instruction. Then the instructors meet the kids and their parents at the pier, where they fish.
All fish are released during the instructional program to promote the catch-and-release ethic.
Parents interested in registering their children for one of the programs can do so by going to marinelife.org. (Click on “experiences,” then navigate to the calendar and look under Saturday for the Kids Fishing Program.)
Parents and children who show up at the Marinelife Center on a Saturday morning can participate without advance registration if space allows. Each program is limited to 10 young anglers.

Shore-based shark fishing regulations to get update
The Florida Fish & Wildlife Conservation Commission approved draft changes to shark-fishing regulations in December that would prohibit chumming from beaches and require anglers to obtain a free shore-based shark fishing permit.
The FWC plans to require some basic education for shore-based shark anglers, possibly through an online course, to obtain the permit.
The shark-fishing regulation changes must receive another approval by the FWC; a final vote is scheduled for February.
The FWC says the changes should increase the survival rate of released sharks — and reduce public concerns about shark fishing from the state’s beaches.
In addition to requiring a permit and prohibiting chumming, the regulations would prohibit the delayed release of any of the 26 shark species that cannot be harvested in Florida — and require that those prohibited sharks remain in the water while being released.
The FWC also plans to require that anglers fishing for sharks, from land or from a boat, use non-offset circle hooks that are not made of stainless steel — hooks that would rust if left in the shark.
The proposed rules also would require shark anglers to have and use a device, such as wire cutters, that could quickly cut the leader or hook.
Also at its Dec. 12 meeting in St. Augustine, the FWC tentatively expanded protection for the Blue Heron Bridge dive site in Palm Beach County.
If approved in February, the dive-site regulations would prohibit the collection of fish and other marine life for the aquarium trade and expand the existing protected area to include waters north of Phil Foster Park.

Tip of the month
Schedule a free boat safety exam.
Boaters want to have the correct safety equipment on board, but sometimes they overlook a thing or two. The Coast Guard Auxiliary offers free vessel safety examinations to check equipment such as life jackets, navigation lights, signal flares, horns and fire extinguishers.
Volunteers with Flotilla 36 in Boca Raton offer free vessel exams from 10 a.m. to 2 p.m. on the first and third Saturdays of the month at the Silver Palm Park boat ramps in Boca Raton (and on the second Saturday of the month at Lake Ida Park boat ramp in Delray Beach, weather permitting). To schedule a free safety exam, call 391-3600 and leave a message or email fso-ve@cgauxboca.org.
Flotilla 54, which serves Boynton Beach and Delray Beach, sends vessel examiners to the Harvey E. Oyer Jr. Park boat ramps on Saturdays and Sundays, usually from 9 a.m. until 1 p.m. To schedule a boat safety exam, go to cgaux.org, search for vessel examinations and complete the online form.