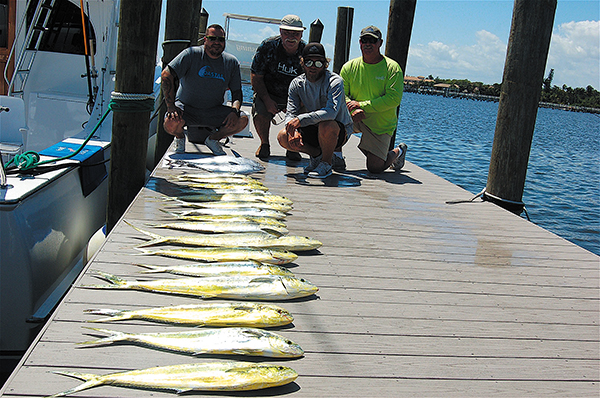 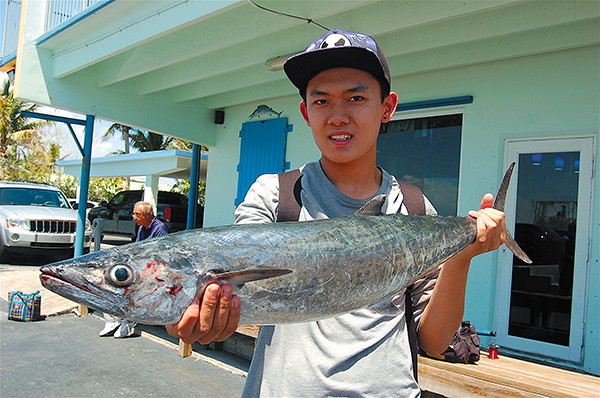 ABOVE: Dolphinfish (mahi mahi) begin to show up in greater numbers as the weather warms in the spring. These were caught in mid-April by Tim Workman (left) and Dave Hammond from the Lantana-based Geno V charter boat operated by Capt. Geno Pratt (far right) and his son, Zane Pratt. RIGHT: Ben He of Wellington shows one of two kingfish he caught vertical jigging during the April 12 morning trip on the Lady K drift boat, based in Lantana. Schools of spring kings are common during May in the waters off Palm Beach County.

Spring is here. Days are getting longer … the sun, stronger. For ocean anglers, that means live bait such as Spanish sardines, threadfin herrings and pilchards should arrive this month, followed by predators such as kingfish, cobia and blackfin tuna.
Bottom fishing for mutton snapper usually improves during May, as does fishing for colorful, high-jumping dolphinfish, best known as mahi mahi.
With spring fishing action expected to heat up with the outside temperatures, here are a few suggestions for catching ocean fish along the coast of southern Palm Beach County:

1. Find live bait.
Look for dimples on the surface of the water in the morning — or find the bait clouds on your boat’s depth finder. If they’re small baits, such as pilchards in shallow water, net them with a cast net. Larger baits such as Spanish sardines are best caught with sabiki quills, then moved carefully into a live-bait well.
Try a No. 6 sabiki rig with an ounce or two of weight clipped to the string of hooks. (Be careful, because the tiny gold hooks often wind up in shirts or fingers.)
If you don’t like catching bait, buy it from an on-the-water bait dealer such as Dynamite Live Bait, which often sells bait from a boat just inside Boynton Inlet.
2. Match hook sizes to the size of the live bait fish. A 2/0 or 3/0 hook works well with a live Spanish sardine or threadfin herring (also known as greenie). Add about 6 inches of light wire between the hook and the leader to catch toothy fish such as kingfish and wahoo.
3. Add weight to get baits below the surface. Try hooking a sardine onto a 5/0 circle hook tied to 5 feet of 40-pound-test leader with 2 ounces of weight above the leader to catch blackfin tuna.
4. Try drifting with unweighted flat lines holding live bait to catch dolphin and surface-feeding kingfish. Don’t be surprised if a sailfish hits your live sardine or threadfin herring.
“The sardine is my favorite bait by far,” says Capt. Chris Lemieux, a Boynton Beach charter captain.
Lemieux also likes to net dozens of small pilchards, which he throws out as live chum to attract blackfin tuna, typically in 140 to 250 feet of water.
5. Troll near weed lines, current edges and floating debris to find mahi mahi. Try trolling artificial lures such as Rattle Jets, rigged ballyhoo or rigged squid to catch mahi mahi. After one is hooked behind the boat, have a pitch bait (such as a sardine chunk or squid on a half-ounce jig) ready to toss out to followers when they appear near the boat.
6. If you don’t have live bait, use a dead sardine or ballyhoo (from the freezer case at the bait shop) threaded onto triple 5/0 hooks and tied to 40-pound-test leader to catch kingfish, dolphin, snapper and cobia.
Add weight above the hooks as needed. Watch the depth finder on the boat for fish under the boat. Kingfish often show up as marks on depth finders 20 feet or more below the surface.
7. Don’t forget bottom fish. Fishing for the beautiful, tasty mutton snapper can be productive in May and June. Drift with dead sardines, squid or ballyhoo on 30-pound-test leader to catch mutton snappers. (Don’t forget the minimum size for muttons: 18 inches in overall length.)
Drift fishing can be an effective way to fish the ocean along the coast of southern Palm Beach County, said Capt. Bruce Cyr of the Lantana-based Lady K drift boat.
Try drifting with dead baits such as frozen sardines (or a combination of dead and live baits) in three depths at the same time.
Surface baits (unweighted flat lines) target sailfish, dolphin and surface-feeding kingfish. Lightly weighted mid-water baits often catch kingfish, cobia and blackfin tuna. At the same time, bottom baits rigged with heavier weights could catch snappers, groupers, African pompano or amberjack.
Drifting with baits positioned in various depths offers anglers the chance to catch a wide variety of fish, Cyr said. 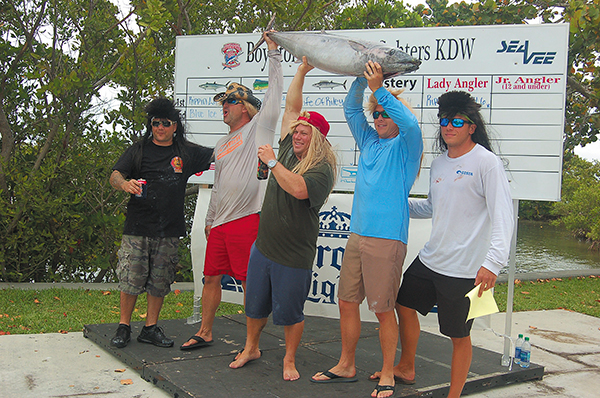