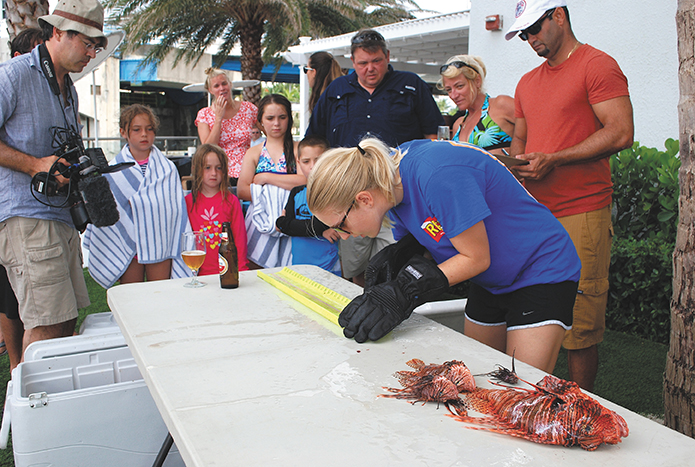 brought in by eight dive teams in the Gold Coast Lionfish Derby. 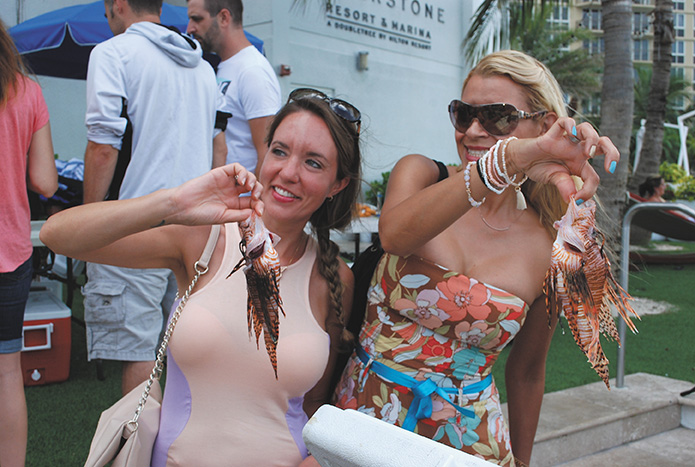 who stopped by the cleaning table to check out the nonnative fish. 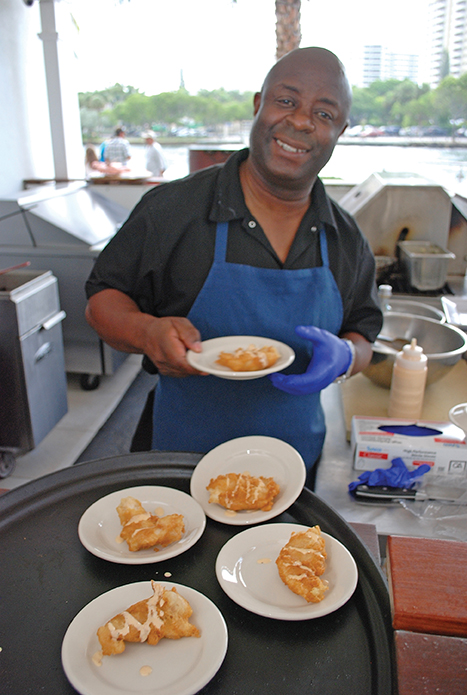 Free samples of lionfish were served after dive teams returned to the Waterstone Resort & Marina in Boca Raton.

Teams of divers competing in the Gold Coast Lionfish Derby helped rid the reefs around Boca Raton and Pompano Beach of lionfish — an invasive, nonnative fish that steals food from Florida’s native fish and eats their young.
Eight four-diver teams used small pole spears to harvest a total of 655 lionfish during the June 18 event. They brought coolers filled with lionfish back to the docks at the Waterstone Resort & Marina in Boca Raton, where the fish  were measured, counted and, eventually, eaten.
Derby organizers from World of Scuba in Boca Raton awarded cash prizes to the teams with the most, the largest and the smallest lionfish.
Team Painkillers speared the most lionfish, 153, to win $600. The ZooKeeper team placed a close second, with 149 lionfish, to win $300.
The Painkillers crew also took the $600 top prize for the largest lionfish — 434 millimeters, about 17 inches. The ZooKeeper team won another $600 by bringing in the smallest lionfish at 82 millimeters, about 3.2 inches.
Divers said they found many of the lionfish on reefs in 60 to 90 feet of water. Others went to depths over 100 feet in search of larger lionfish.
Lionfish experts from the Key Largo-based Reef Environmental Education Foundation measured and counted each lionfish brought to the docks — both for the contest and for size data used to track the status of lionfish populations.
Experienced lionfish divers who know how to avoid the fish’s 18 venomous spines cleaned the lionfish before chefs from the Waterstone dipped the white fillets in beer batter and deep-fried them. Free samples of fried lionfish were served, topped with a chipotle lime aioli sauce.
Lionfish harvesting events help control populations of the invasive fish, but scientists believe the nonnative reef invaders are here to stay.
“No one believes eradication will happen,” said Emily Stokes, lionfish program assistant for REEF. “But local control is very effective. Derbies like this make a huge difference.”
More lionfish derbies are planned this summer in South Florida, including a July 16 event based at 15th Street Fisheries in Fort Lauderdale and another derby set for Aug. 13 at the Loggerhead Marinelife Center in Juno Beach.
For a statewide list of lionfish harvesting competitions, go to www.myfwc.com/lionfish. 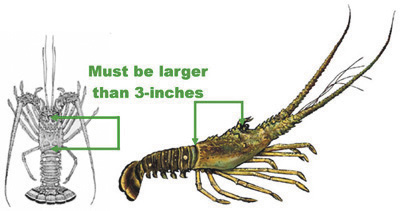 The lobster’s carapace must measure more than 3 inches for a lobster to be legal to keep. Egg-bearing lobsters must be released. Fla. Fish and Wildlife Conservation Commission

Two-day sport lobster season set for July 27-28
Sport divers will take the plunge to search for spiny lobster during the two-day sport season July 27-28.
The Florida Fish & Wildlife Conservation Commission is again offering divers the opportunity to bag an additional lobster each day of the mini season — if they first document the harvest of at least 50 lionfish.
For a diver to qualify for the extra lobster, the 50 lionfish must have been harvested between May 14 and July 26 and documented. Lionfish can be brought to checkpoints, or photos can be submitted via email. (For details, go to www.myfwc.com/lionfish and click on “lionfish challenge.”)
Here’s a quick review of the basic rules for divers planning to search for “bugs” during the two-day sport season:
• A saltwater fishing license and lobster permit are required except for divers who are Florida residents under 16, over 65 or otherwise exempt.
• The daily bag limit is 12 lobsters, except in Monroe County and Biscayne National Park, where the sport-season limit is six.
• A lobster’s carapace, or head section, must measure more than 3 inches to be legal to keep. Egg-bearing lobsters must be released. (Look for the spongy orange mass under the tail.) Divers should measure lobster underwater and bring them back to land intact.
• Red-and-white dive flags are required by law. Dive flags on boats must measure at least 20 inches by 24 inches, should have stiffeners to keep them unfurled and should be displayed from the highest point on the boat. A float-mounted diver-down buoy should be towed by divers in the water.
Boaters must stay 300 feet away from dive flags on the open ocean and 100 feet away in inlets, rivers and navigation channels. Those approaching closer should do so at idle speed.
The regular lobster season opens Aug. 6.

Boat registration discounts take effect this month
Boating safety legislation approved earlier this year gives recreational boat owners a modest discount on their annual boat registration fee if they have a properly registered emergency satellite beacon, such as an EPIRB or personal locator beacon.
Satellite beacons transmit the location of boaters in distress, making the job of finding them far simpler for rescuers when the beacons are registered with NOAA. (www.sarsat.noaa.gov/beacon.html)
Boaters who own more than one boat can receive a registration discount for each boat with a registered EPIRB. Those with a registered PLB can receive a discount for only one boat.
The discount applies to boats registered between July 7 and June 30, 2017.
To receive the discount, boat owners should take their NOAA beacon registration certificate to a driver license/motor vehicle service center, such as the one at 501 S. Congress Ave. in Delray Beach. 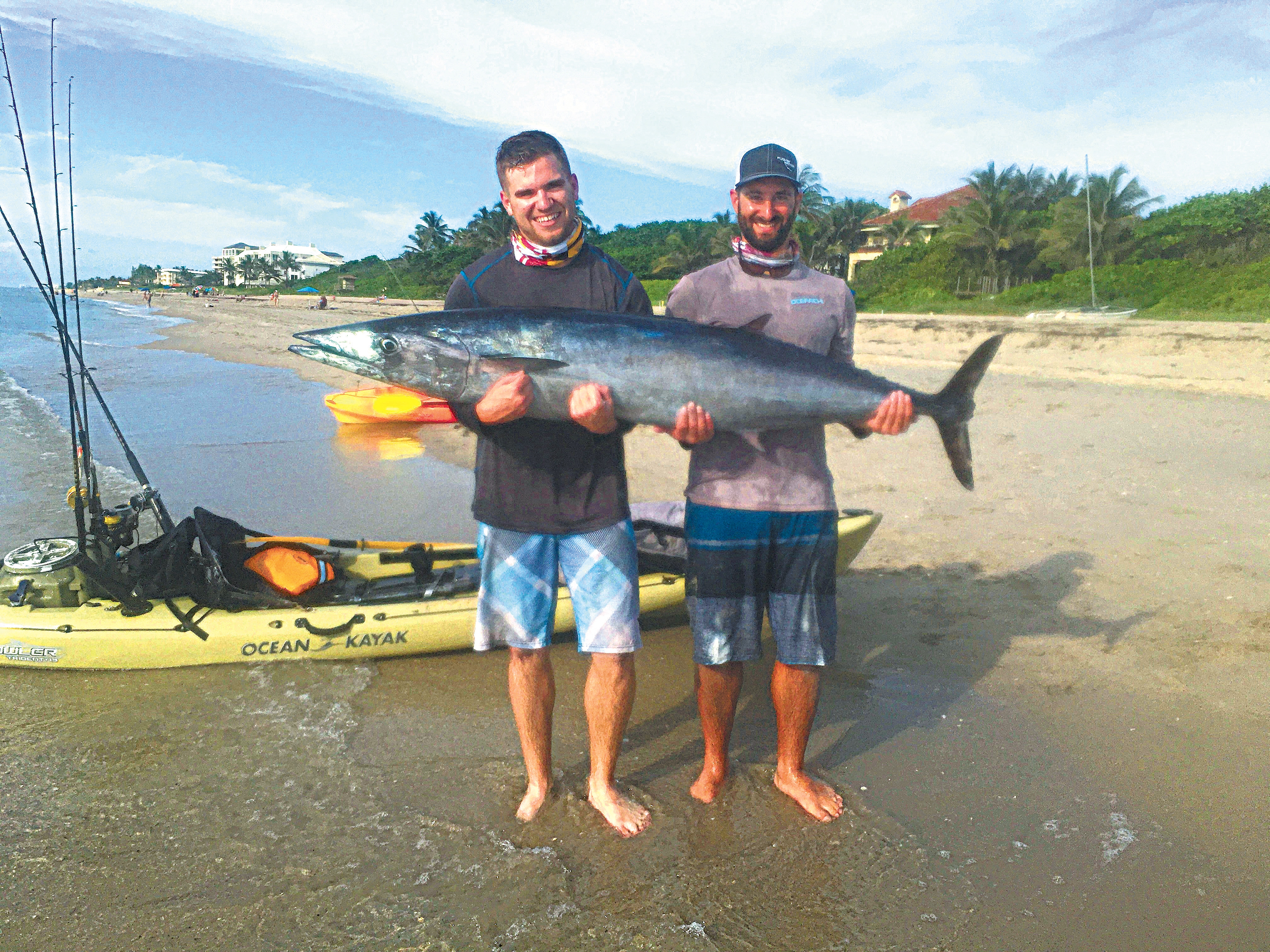 Ryan Gutz, left, and Alex Wasserman hold the 90-pound wahoo they caught from their kayaks

off Boynton Beach on the morning of June 12. Wasserman hooked the fish and handed the rod

to Gutz, who fought it for 30 minutes while it towed his kayak. Watch a video

of the wahoo catch at www.thecoastalstar.com.

Kayakers catch 90-pound wahoo off Boynton Beach
An Iowa man got a back-wrenching introduction to ocean fishing on the morning of June 12, when he and a Palm Beach County chiropractor caught a 90-pound wahoo from kayaks off Boynton Beach.
Alex Wasserman, a chiropractor with Health-Fit Chiropractic & Sports Medicine in Boca Raton, was fishing with Ryan Gutz, a summer intern in his office from Iowa.
They were drifting in 110 feet. After putting out a live goggle-eye for bait around 7 a.m., Wasserman said he was holding the rod, explaining to Gutz how the reel worked, when something began taking line — slowly at first, then at a “screaming” pace.
“I handed the rod to Ryan, who then spent the next 30 minutes getting dragged out to 320 feet,” Wasserman said. “He told me his hands were going numb. I was screaming instructions at him.”
Wasserman eventually took the rod, worked the wahoo to the surface and gaffed it. They paddled back to the beach for a photo.
Wasserman said the wahoo weighed 90 pounds. He said it was Gutz’s first time fishing in the Atlantic and his first time in a kayak.

Tip of the month
Snook season is closed until Sept. 1.
But even when snook are in season, they’re largely a catch-and-release fish because of the tight slot size limit.
Snook caught on Florida’s east coast must be 28 to 32 inches in total length to be legal.
How snook are handled before they’re released makes a big difference in whether they survive.
Keep the fight short and keep the snook in the water as much as possible. If you plan to photograph a snook, be sure to have the camera ready and lift the fish from the water for only a few seconds.
Snap the photo and lower the fish gently back into the water, supporting the fish under the belly.
To get the accurate weight of a snook (or other fish) to be released, consider buying a snook sling. Developed by the West Palm Beach Fishing Club, snook slings cradle fish and allow them to be lifted from and lowered gently into the water.
Slings cost $65. They have eyes for attaching a scale and weigh a pound, so they’re easy to use for weighing and releasing fish.
For more information on snook slings, call the West Palm Beach Fishing Club at 832-6780 or order them online on the “store” section of the club’s website, www.westpalm beachfishingclub.org.