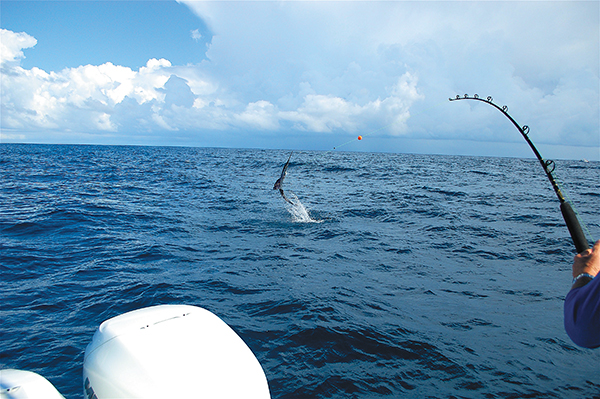 A winter storm brought snow and sleet to Tallahassee in early January and dropped South Florida temperatures into the 40s, all of which influenced fish, boats and coastal wildlife.
As blustery north winds blew across Palm Beach County, anglers caught Spanish mackerel and bluefish from the Boynton Inlet jetties, the Lake Worth pier and from beaches in southern Palm Beach County.
“When it’s cold, they really bite good,” said Bobby Spickler of Perk’s Bait & Tackle in Lantana. “Problem is, not everybody wants to brave the cold.”
Drift boat captains reported very slow fishing in the waters off Boynton Inlet during the coldest days of early January, possibly because of freshwater runoff.
An exception: Spanish mackerel caught using jigs, spoons and Gotcha lures in 30 to 45 feet of water, said Capt. Bruce Cyr of the Lady K drift boat based in Lantana.
Capt. Chip Sheehan of Chips Ahoy Charters in Boynton Beach said the chill stoked the sailfish action. He caught and released 11 sailfish one day in early January as he ran his boat north from Boynton Inlet to the waters off Jupiter.
In the 81st annual Silver Sailfish Derby, a sailfish release tournament hosted by the West Palm Beach Fishing Club, the 41-boat fleet released 317 sailfish in two days of fishing Jan. 11-12.
That’s more than double the 153 sailfish released by the Derby fleet in January 2017, when the weather was balmy.
Capt. Skip Dana and his crew on Southern Run won this year’s derby with a two-day total of 17 sailfish releases. Most of the Southern Run team’s fish were caught in the waters between Juno Beach and Jupiter.
In the 46th annual Gold Cup Team Tournament, a sailfish release competition organized by the Sailfish Club of Florida, 28 boats released a total of 232 sailfish in three days of fishing.
Capt. Hans Kraaz and his team on Vintage won the Gold Cup with a three-day total of 18 releases.

Cold affects manatees,
North Florida sea turtles
January’s cold prompted manatees to gather around warm-water outflows at Florida Power & Light Co.’s power plant near the Port of Palm Beach.
Manatee lovers flocked to FPL’s Manatee Lagoon viewing facility in West Palm Beach to watch the marine mammals bask in warm water as air temperatures dropped into the 40s. (For details about Manatee Lagoon, go to www.visitmanateelagoon.com.)
The Florida Fish & Wildlife Conservation Commission asks boaters to take extra care to avoid manatees during cold weather, especially around warm-water discharges such as canals and power plants.
Cold weather also can stun sea turtles, causing them to float listlessly and appear dead, even though they’re still alive.
No reports of stunned sea turtles were reported in South Florida during the January cold snap, as ocean temperatures remained in the 70s, said Kirt Rusenko, marine conservationist at Gumbo Limbo Nature Center.
Stunned sea turtles were reported at St. Joe Bay in the Panhandle, where nighttime temperatures dropped into the upper 20s, Rusenko said.
About 900 cold-stunned sea turtles were rehabilitated at the Gulf World Marine Institute in Panama City and the Gulf Specimen Marine Lab in Panacea and were released into the Gulf of Mexico on Jan. 20.
To report problems with manatees, sea turtles or other Florida wildlife, call the FWC’s Wildlife Alert Hotline at (888) 404-3922.

Anchored boats break
loose, come ashore
Wind from the early January cold front worked two sailboats loose from their anchors in the Lake Worth Lagoon near Boynton Beach.
On Jan. 3, a loose sailboat struck a dock in The Harbors, a waterfront community. Homeowners association President Sean Butler said the same community docks sustained an estimated $1,000 to $5,000 in damage.
Boynton Beach police contacted the sailboat’s owner, who towed it away with a broken mast on Jan. 4. Police said the owner moved the sailboat to the boat ramps at Harvey E. Oyer Jr. Park and was planning to remove the boat from the water.
Another sailboat broke loose in windy weather and hit a private dock at 821 Ocean Inlet Drive. Officer Darin Hederian of the Boynton Beach Police Department’s marine unit said that sailboat was relocated and anchored.
Several waterfront residents have said they plan to ask city officials to address the issue of boat owners dropping anchor in the Lake Worth Lagoon near Boynton Beach. 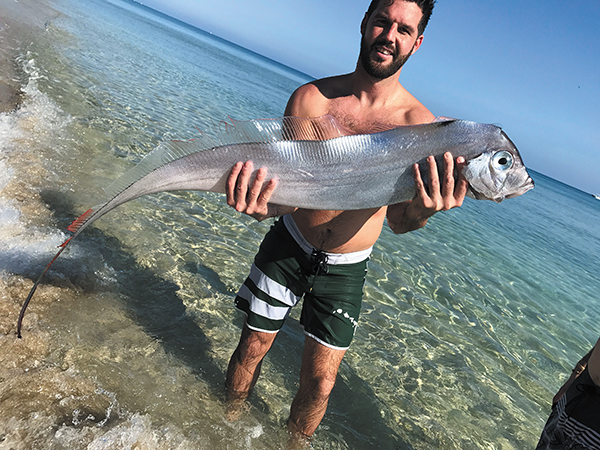 David McCall caught this odd-looking fish with his hands in the surf in front of the Briny Breezes clubhouse Dec. 1 and released it after holding it for photos. The Florida Fish & Wildlife Conservation Commission said the long, slender fish could be a juvenile oarfish or possibly a tapertail, a rarity in the Atlantic waters off South Florida. Photo provided

Snook season
reopens on east coast
The fishing season for snook, the prized game fish with the distinctive black stripe, opened Feb. 1 after being closed since mid-December.
To be legal to harvest on Florida’s east coast, snook must be between 28 and 32 inches in overall length. Snook longer or shorter than the legal slot should be handled carefully and released promptly.
A Florida saltwater fishing license and snook permit are required to harvest snook, unless anglers are Florida residents younger than 16, older than 65, or otherwise exempt.
Snook season remains closed until March 1 on Florida’s west coast, including all of Monroe County and Everglades National Park. 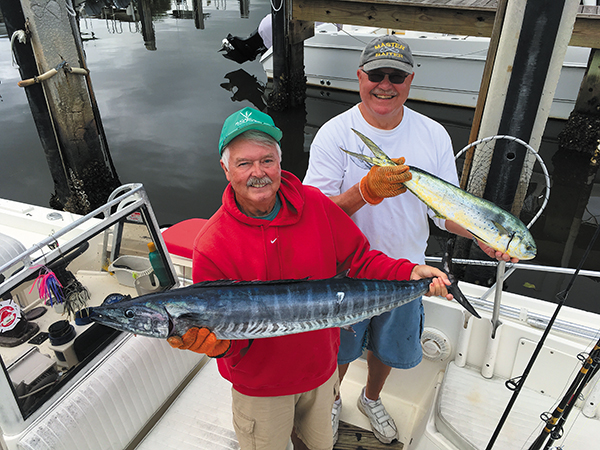 Remus Holbrook (l) and Cliff Albertson of Briny Breezes were trolling in 200 feet of water in front of the Lake Worth Pier when they hooked a 25-pound, 43-inch wahoo. After a lengthy battle, they pulled it in. They also brought in a dolphinfish (rear). Photo provided

Tip of the month
Taking friends out to a waterfront restaurant or bar for a late afternoon drink?
Designate a nondrinking skipper for the ride home. Doing so eliminates the possibility of getting a BUI (boating under the influence) citation. It reduces the chance of an accident on the water, especially if the skipper must guide the boat home after dark through channels flanked by unlighted markers.
Check out the Sea Tow Foundation’s designated skipper campaign at www.boatingsafety.com.