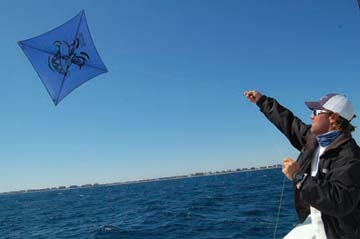 caught the sailfish using a live bait dangled from a fishing kite.

The northerly winds and ocean swells of winter bring with them the opportunity to catch and release sailfish — a beautiful, high-jumping billfish with a sail-like dorsal fin that has the distinction of being the state’s official saltwater fish.
Sailfish can be found year-round in the waters off Palm Beach County, but their numbers typically increase during the cold-weather months.
The winter season’s many sailfish release tournaments typically begin in December and continue into April. Tournament fishing teams spend many a blustery winter day in hot pursuit of “spindlebeaks” in the Atlantic waters off Palm Beach County, where the Gulf Stream current sweeps so close to the beach that sailfish are occasionally caught from fishing piers.
But you don’t have to be competing for the most releases to enjoy a day of catch-and-release sailfish action, as Capt. Chip Sheehan of Boynton Beach and mate Billy Blackman demonstrated recently.
Sheehan operates the Chip’s Ahoy charter boat based at Boynton Harbor Marina and has been a sailfish tournament competitor for 20 years. In addition to running his boat, Sheehan serves as a tournament skipper on other boats.
Sheehan specializes in kite fishing, a method used by most teams competing in sailfish tournaments off the coast of Palm Beach County.
In kite fishing, a kite is sent aloft from the boat and lines holding live baits are dangled from the kite line (or lines). When a fish strikes, the release clip opens, freeing the fishing line. Kite fishing holds leaders out of the water and encourages baitfish to make fish-attracting splashes on the surface.
During a trip to the waters off Boynton Inlet in November, Sheehan stocked up on live baits and launched two kites from the stern of his 33-foot Invincible after choosing a spot to fish offshore. He typically finds “sails” in 100 to 200 feet of water, but he stays in touch with other captains to discover in what depth sailfish are being found on any given day.
With Blackman’s help, Sheehan launched two kites and rigged live baits on six fishing lines, three dangled from each kite line.
The first fish to strike the kite baits were dolphin. Sheehan and Blackman were not disappointed. Dolphin (mahi mahi), are among the most sought-after of ocean fish because they’re beautiful, high-jumping and make excellent dinner fare (as long as they measure at least 20 inches to the tail fork.)
Other fish caught when kite fishing include blackfin tuna, kingfish and occasionally wahoo.
After a few hours of fishing, Blackman took the rod to fight a sailfish that hit a live goggle-eye in 100 feet of water off the Lake Worth pier. Sheehan held the sailfish’s head out of the water for a few seconds for a photo, then released it.
Later that afternoon, Sheehan spotted the dark shadow of another sailfish that was stalking one of his kite baits but decided not to strike for some reason.
Even though sailfish look silver in some photos, they display different colors based on their moods. Sailfish usually appear dark in the water when they’re chasing prey.
We ended our November trip with several dolphin in the cooler and one sailfish release pennant flying — a nice day of fishing, but hardly a red hot day of sailfishing by Sheehan’s standards.
Sheehan spends about 250 days a year fishing the ocean. His best single day of sailfish action came in 2004, when his team released 30 sailfish during the Silver Sailfish Derby, a tournament organized by the West Palm Beach Fishing Club.
In January, Sheehan and his fishing partners released 23 sailfish in the waters off the Boynton Beach water tower (south of Boynton Inlet). Sheehan said he could see the tails of sailfish in waves driven by north winds that day.
“They were tailing, headed south like bullets,” he said.
When conditions are right following a cold front, the sailfish action off Palm Beach County can be world-class. On Jan. 5, 2012, the first day of the Silver Sailfish Derby, fishing teams found sailfish leaping from the water and tailing in the waves. Anglers on 46 boats released a combined 659 sails that day.
All tournament sailfish are caught on non-offset circle hooks, which cause less internal damage to fish than traditional J hooks and are mandatory in billfish tournaments.
Nearly all sailfish are released nowadays.
To be legal to keep, a sailfish must measure 63 inches from the tip of the lower jaw to the fork of the tail. A federal HMS (highly migratory species) permit is required to harvest sailfish and other billfish, and all landings must be reported to NOAA within 24 hours.
To reach Capt. Chip Sheehan regarding fishing trips aboard the 33-foot Chips Ahoy leaving from Boynton Harbor Marina, call 436-1417 or go to www.chipsahoycharters.com.

Notes
Boynton Beach’s annual Holiday Boat Parade kicks off at 5:30 pm on Dec. 12 with live entertainment and activities for children. The boat parade begins at 6:30 p.m. at the Lantana bridge on Ocean Avenue. The decorated boats then move south ending at the C-15 Canal in Delray Beach. Viewing areas include Boynton Harbor Marina and Intracoastal Park. U.S. Marines will collect donations of new, unwrapped toys at viewing areas.
Boaters interested in participating should call the Boynton Beach CRA at 600-9097. For details about parade viewing areas in Delray Beach, call the city at 243-7000.

Members of the Coast Guard Auxiliary’s Flotilla 36 will teach the introductory About Boating Safely (ABC) course Dec. 6 in the headquarters building at Spanish River Park, 3939 N. Ocean Blvd., Boca Raton. Course hours are 9 a.m. to 5 p.m. The $35 fee can be paid at the door.  Call 391-3600 or go to www.cgaux.boca.org.

Tip of the month: Delicious Florida pompano can be caught from the beach when conditions are right. Use a long (10 feet or more) surf rod and heavy pyramid sinkers (3 to 4 ounces) to make long casts from the beach onto sand bars where waves are stirring up sand, leaving foamy sheets of brownish water. Waves unearth sand fleas and crabs that bottom-feeding pompano like to eat. Rig your rod with a pre-made pompano rig, which usually features two or three hooks above the sinker. For bait, use live sand fleas, bits of fresh shrimp or clam strips. Pompano must measure at least 11 inches to the fork of the tail to be legal to keep. The daily bag limit is 6.
Look behind you before casting from the beach. Don’t fish around swimmers or in guarded swimming areas. A Florida saltwater fishing license is required. Florida residents must carry a free shoreline fishing license unless they’re exempt. A three-day, non-resident saltwater fishing license costs $17. Call 888-347-4356 or visit www.myfwc.com.