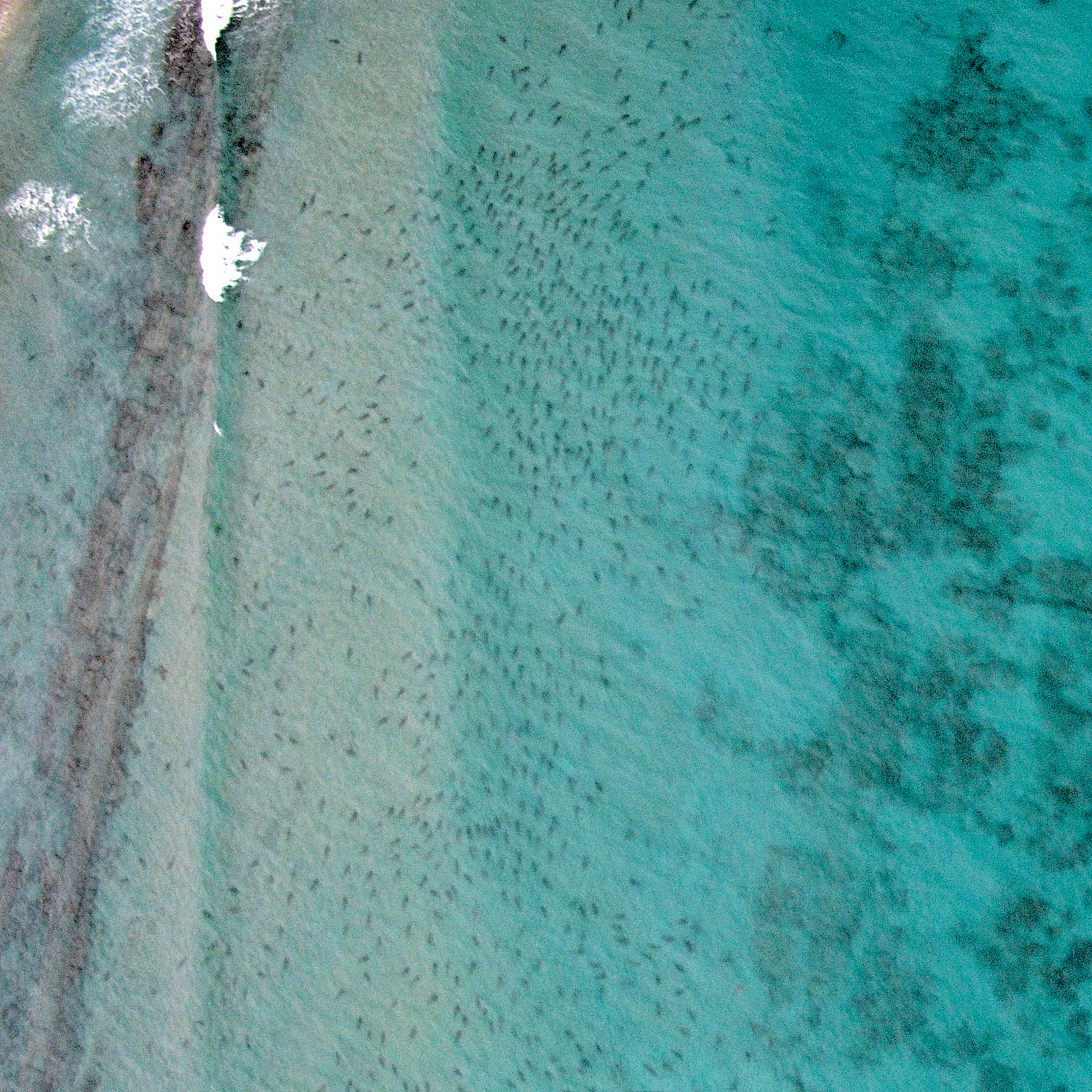 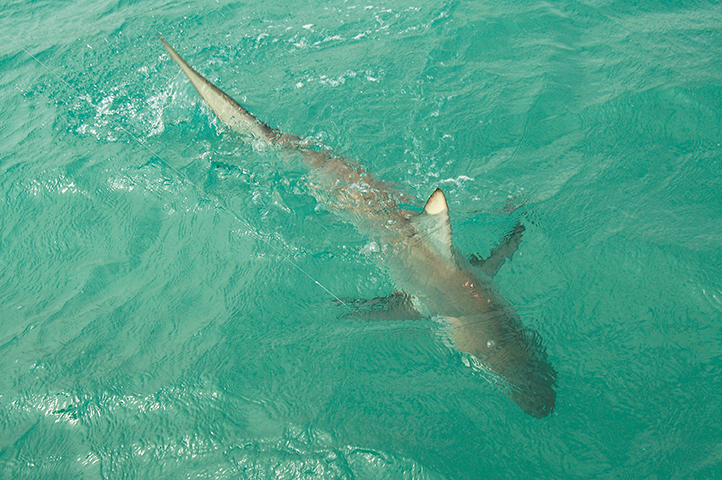 during the annual migration.

Thousands of blacktip sharks moved along Palm Beach County’s beaches during February and March, part of an annual migration that draws attention from marine scientists, photographers and anglers.
But there’s something of a mystery about our gathering of shallow-water sharks: For the most part, they steer clear of the beaches in south Palm Beach County, while they can be found by the hundreds along beaches in the northern half of the county.
“From Boca to Boynton, there are very few sharks,” said Stephen Kajiura, a Florida Atlantic University biology professor who has been studying South Florida’s shark migration for five years and flies over beaches from Miami to Jupiter to observe the sharks.
County lifeguards spotted only a few blacktip sharks in late February at Ocean Inlet Park, just south of Boynton Inlet.
Farther north off Singer Island, large numbers of blacktips forced lifeguards to close Ocean Reef Park to swimmers several times during February, said Robert Wagner, South County captain for Palm Beach County Ocean Rescue.
Kajiura says he’s not sure why the migrating sharks avoid the shallows in south Palm Beach County. But at least beach-goers don’t have to worry as much about running into a shark in this area.
Shark feeding habits could provide some clues. Kajiura, who catches and inserts transmitters into blacktip sharks to study their movements, hopes to analyze their stomach contents in the future.
Blacktip sharks migrate south in the fall, then head back north in the late winter and early spring, traveling along South Florida beaches during February and March.
Even though seeing large numbers of sharks might give swimmers the jitters, blacktip sharks tend to move away from people, at least in clear water.
While flying over beaches in a small airplane, Kajiura said, he has watched sharks swim around people in the water. From the air, he said, it looks like a bubble forming around the swimmers.
“They’re pretty skittish,” Kajiura said. “When you’re in the water, they’re likely to bolt. But treat them with respect.”
Wagner, who worked as a beach lifeguard for 25 years, said blacktip sharks generally avoid swimmers in clear water.
“If it’s brown, dirty water holding bait fish, stay away from it,” Wagner advises.
Photos and videos from FAU’s shark migration research can be found on Facebook by searching for “FAU Shark Migration.”

Legislation promotes emergency beacons
Florida legislators approved a bill that gives boat owners a small discount on annual registration fees if they have a registered satellite beacon such as an EPIRB (emergency position-indicating radio beacon) or a PLB (personal locator beacon).
The Senate version of the bill, co-sponsored by Sen. Maria Sachs of Delray Beach and Sen. Joe Negron of Palm City, would have given a larger discount to boat owners for having a satellite beacon than the House version that was approved.
The version signed into law March 25 by Gov. Rick Scott gives boat owners registration discounts of about 13 percent, beginning July 1, if they provide proof of having a satellite beacon registered with NOAA.
The owner of a Class 1 boat (16 to 26 feet), for example, would save $3.92 in annual registration fees. Satellite beacons range in price from about $250 to about $1,500.
The legislation stems from the disappearance last summer of Austin Stephanos and Perry Cohen, two 14-year-old Tequesta boys who left Jupiter Inlet in a 19-foot boat on July 24 and never returned.
Rescue beacons send up a unique signal to satellites during emergencies, allowing rescuers to pinpoint the location of the boaters in distress.

Delray fishing history exhibit to open in June
The Delray Beach Historical Society has delayed the opening of its Fish Tales! fishing history exhibit until June.
The exhibit had been scheduled to open in late April.
Winnie Edwards, executive director, said the historical society is still busy gathering fishing photos, stories and tackle for the exhibit.
“Amazing things are coming in,” Edwards said.
Anyone who has stories, photos, newspaper clippings, trophy fish mounts (especially of fish caught in the Delray Beach area) or fishing tackle that could be considered for the exhibit should contact the historical society at 274-9578 or email archive@delraybeachhistory.org.

Tip of the month
Hook a bird while fishing?
Don’t cut the line.
Birds that fly away with a hook and line attached are at risk of becoming tangled in trees and dying.
Kevin Oxenrider, a biologist with the Florida Fish & Wildlife Conservation Commission, offers these tips for removing a hook and line from a bird:
• Use a net to lift the bird out of the water. Don’t lift it with the fishing rod.
• Wear sunglasses and take other steps to protect yourself before handling a hooked bird.
• Grasp the bird’s head behind its eyes, then fold its wings against the body.
• If it’s a pelican, hold the beak, but keep it open slightly so it can breathe.
• Try covering the bird’s head with a towel, T-shirt or cloth to calm it down before removing the hook.
• Remove the hook by cutting off the barb and backing the hook out. (If the barb is buried in the bird’s flesh, push it through so the barb is exposed and remove it.)
• If the bird is entangled in line, use scissors or clippers to gently cut the line.
• Set the bird’s feet on the ground (or boat deck) and step back while releasing it. The bird should take off.

Willie Howard is a freelance writer and licensed boat captain. Reach him at tiowillie@bellsouth.net