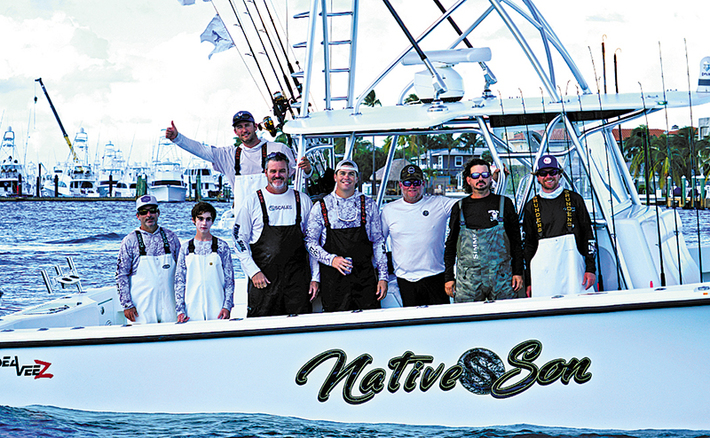 Often a top contender in South Florida’s winter sailfish tournaments, Sapp and his Native Son team won $79,180 along with a trophy depicting the Hope Town Lighthouse in the Bahamas.

Sapp said most of his team’s sailfish — along with a few mahi mahi and a blackfin tuna — were caught using the standard South Florida tournament bait presentation: live goggle-eyes and threadfin herrings dangled under fishing kites.

The Native Son team fished off Hobe Sound on the first day of the tournament, held Dec. 11-12, and farther north off Port St. Lucie on the second day.

Team Wrapped Up, led by Capt. Dave Dalfo and fishing aboard a 61-foot Spencer, scored seven released using dead bait to win the dead-bait division and $23,290.

Capt. Chris Agardy, who operates Fish Envy Charters based at Boynton Harbor Marina, fished on the No Regrets team that finished second overall in the live-bait division, with a two-day total of 10 releases.

Agardy said the No Regrets captain, Garrett Graue, chose to run his 38-foot boat north to the waters off Stuart, which paid off. No Regrets won top boat on the first day of fishing, with seven releases, and squeezed out another three releases on the second day, despite stormy weather.

An aggressive bull shark almost changed the score for the No Regrets crew. Agardy said the shark chased the team’s last sailfish of the tournament, forcing a quick run to the fish and release before the shark could reach it.

Team No Choos, a Bahama 41 skippered by George Brittain of Palm Beach, finished third overall. Brittain’s team also posted 10 sailfish releases over two days but placed behind No Regrets based on the time of the releases.

As is common practice in modern sailfish tournaments, each sailfish release was documented on video and uploaded for the tournament committee to review, eliminating the need to put human observers on boats.

“The majority of teams definitely follow gentleman’s rules,” tournament director Courtney Bowden said. “However, when you add prize money to the mix, you can never be too careful. Team transparency is key. Video validation ensures this.”

The Hope Town United tournament offered live scoring and team information through its own app, developed by Reel Time Apps.

The tournament was a fundraiser for Hope Town United, a nonprofit organization that is raising money for restoration work on Elbow Cay on Great Abaco Island in the Bahamas.

Elbow Cay was hit hard by Hurricane Dorian in 2019. More than 70% of the area’s homes were destroyed or badly damaged, according to Hope Town United. For details, visit www.hopetownunited.org. The Miss Mae team, on a 38-foot Jupiter captained by Brion Weinberg (in background), shows off the 19.3-pound wahoo caught by Luc Croteau (front center) on Dec. 11, the first day of the sailfish tournament. Anglers released all sailfish but brought fish such as kingfish, dolphin and wahoo to the scales at Sailfish Marina in Palm Beach Shores. Willie Howard/The Coastal Star 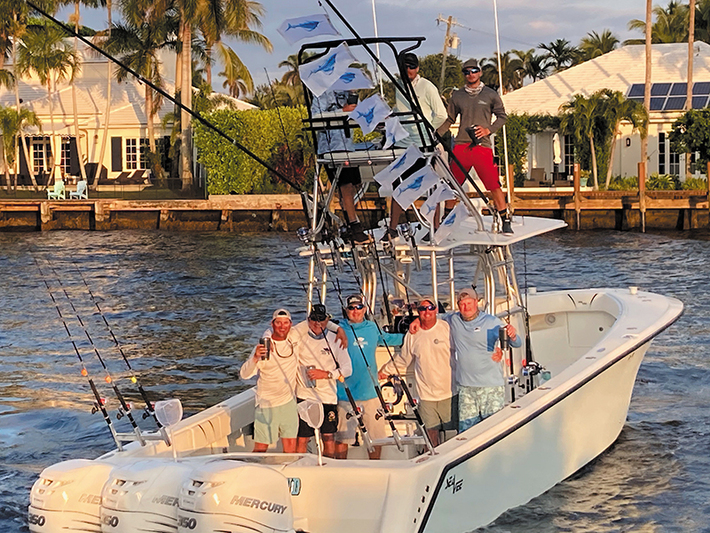 Ocean boaters and beachgoers should be on the lookout for right whales during January and February. Female right whales migrate to Florida’s east coast during the winter to give birth.

Although most of the visiting whales are spotted from Cape Canaveral north, they have been known to move south into the waters off Palm Beach County.

If you see a right whale, stay clear and report the sighting. Federal law requires maintaining a distance of 500 yards.

Right whales are dark gray or black. They have no dorsal fin and have white bumps called callosities on top of their heads. When they come to the surface and exhale, right whales shoot up a V-shaped spout of water.

Fifty-five new artificial reef structures were installed in 40 feet of water off Palm Beach in November as part of the Reef Hope Project. They can be found southeast of Palm Beach Inlet (aka Lake Worth Inlet) at these coordinates: 26/45.321 N and 80/01.566 W.