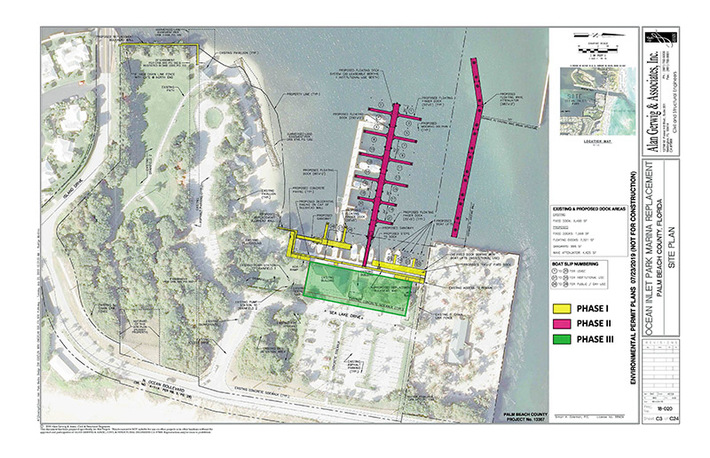 The first phase of renovations (shown in yellow) at Ocean Inlet Park Marina will include removing old fixed docks and installing floating day-use docks. Work is scheduled to begin in May. Rendering provided

The modernization of aging Ocean Inlet Park Marina is scheduled to begin in May with the removal of old concrete fixed docks, the replacement of the marina bulkhead and the addition of floating day-use docks for the public.

The owners of boats stored at the marina’s 20 slips were expected to receive notice in late February that they must remove their vessels by April 30.

The first phase of the renovations — expected to be completed in the spring of 2022 — will include removing the old concrete fixed docks that extend west toward the Intracoastal Waterway, replacing the bulkhead and adding three ADA-accessible floating day-use docks at the south end of the marina.

The floating day-use docks will undoubtedly be a welcome sight for boaters who have struggled to pick up or drop off passengers at the fixed docks during low tide.

Lifts for Palm Beach County Sheriff’s Office boats will be moved to the north side of the marina as part of the phase 1 work. The crumbling sidewalk near the bulkhead on the marina’s north side also will be replaced. 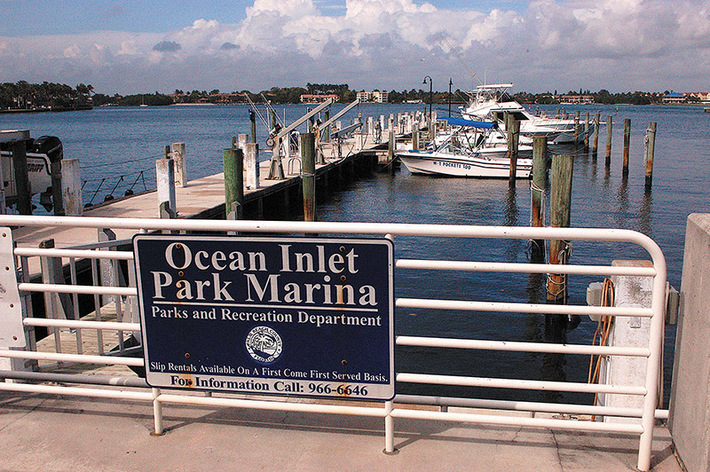 A view of the old fixed docks that will be torn down as part of renovations at the county park, located just south of Boynton Inlet.
Willie Howard/The Coastal Star

“The goal of this project is to replace the failing bulkheads and fixed docks that have been in place for over 35 years and have reached the end of their useful life,” said Bob Hamilton, director of park development for Palm Beach County’s Parks and Recreation Department.

Money for the $3 million estimated cost of the phase 1 work will come from proceeds of the county’s 1-cent sales surtax and a grant from the Florida Inland Navigation District.

Although boat owners will be vacating the marina’s slips this spring, it could be late 2023 before they can move their boats back there.

New floating-dock slips are scheduled for construction as part of the second phase of renovations. The timing of the second phase depends on funding, Hamilton said, noting that the county has applied to FIND for a $1.5 million grant that would cover about half of the phase 2 cost.

A new marina building and restrooms near the parking lot are planned for the third phase of work.

Hamilton said there are no plans to bring back the café that used to operate next to the marina building, but noted that parks officials will consider some type of food concession during the design of the third phase.

The Palm Beach International Boat Show is scheduled for March 25-28 along the waterfront in downtown West Palm Beach.

Face masks will be required for exhibitors, show staff and attendees. Show producer Informa said all of those people will have temperatures checked before being allowed to enter the show.

Show entrances will be on Flagler Drive at Evernia Street and at North Clematis Street.

For details about the show and parking locations, call 954-463-6762 or visit www.pbboatshow.com.

Fish for cobia during March. Drop a cobia jig near the bottom or use a dead sardine on triple hooks garnished with a flashy “duster” and a half-ounce weight over the hooks.
Fish over natural reefs or near wrecks such as the Skycliffe (just north of Boynton Inlet). Have a measuring tape and a heavy-duty landing net handy.
Cobia must be at least 33 inches to the fork of the tail to be legal to keep. Undersized fish should be released as quickly as possible. Daily bag limit: 1 cobia per angler.