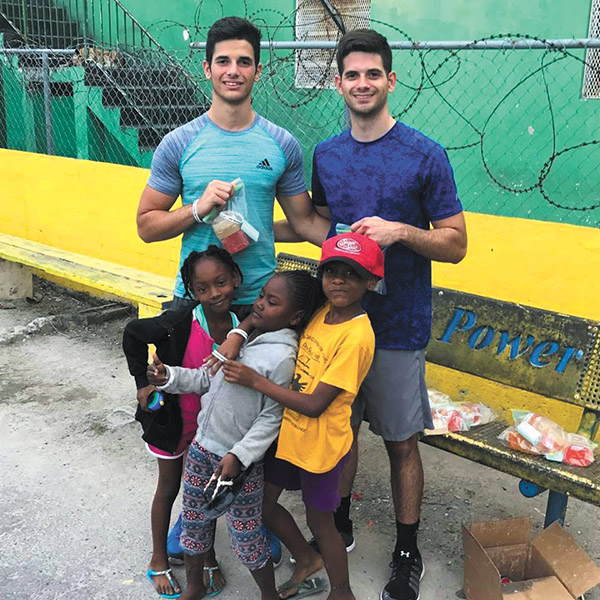 The Metropulos brothers — Nick, left, and Lucas — have operated the nonprofit fishing

and environmental education organization Fishing for Families in Need based at St. Andrew’s School

in Boca Raton since 2007. This photo was taken in January, when the brothers traveled to Nassau, Bahamas,

to help with Hurricane Matthew relief efforts through Lend a Hand Bahamas. of the St. Andrew’s School in Boca Raton. The student-run nonprofit Fishing For Families in Need

at the Florence Fuller Child Development Centers in Boca Raton.

Brothers Lucas and Nick Metropulos love fishing and diving and sharing their passion for the ocean and marine conservation with children.
When Lucas was attending St. Andrew’s School in Boca Raton in 2007, he started the nonprofit Fishing for Families in Need to provide fishing and ocean education to children and to offer fresh fish to soup kitchens.
Lucas wanted children to develop an appreciation for fish, coral reefs and other aspects of the ocean. His father, a Greek Orthodox minister, trained him to provide service to others.
“We don’t just teach the kids to go out and catch whatever they can,” Lucas Metropulos said. “At the end of the day, they learn that we need to protect what’s out there.”
Fishing for Families in Need —  www.F4FN.com — held its first student-run classes for youths in 2008. Nine years later, the organization is still teaching children about fishing and the ocean, taking them on fishing trips and providing fresh fish to soup kitchens.
Nick Metropulos, a senior at St. Andrew’s School, is overseeing the nonprofit organization, which uses about 30 student volunteers from high schools in Boca Raton to provide its services.
The organization’s core program teaches fishing skills with a dose of environmental education to children 8-12 at the Florence Fuller Child Development Centers in Boca Raton.
During the first day of the spring 2017 class, held Feb. 1 at the Florence Fuller centers, children raised their hands eagerly to answer questions about ocean pollution, overfishing and what constitutes a keystone species.
Together, with a little help, they named the five oceans along with the largest ocean (Pacific), the second largest (Atlantic) and the smallest (Arctic).
The fishing lessons are hands-on as well as conceptual. Volunteers show the kids how to rig rods, tie fishing knots, throw cast nets and clean fish. They practice casting on the basketball court.
After the training is complete, the kids take a graduation fishing trip — usually to Anglins pier in Lauderdale-by-the-Sea or aboard the Lady K drift boat based in Lantana.
Youths who complete the fishing education program each receive a rod and reel and tackle box donated by Fish Florida, a nonprofit organization that raises money through the sale of sailfish license tags (www.fishfloridatag.org).
Students working with Fishing for Families in Need also host a summer spearfishing tournament after which they clean and bag fish for donation to soup kitchens.
Student volunteers collect and clean fresh fish from anglers throughout the year — often fish brought to the scales during tournaments — to make fresh fish available to soup kitchens.
Fish donated by the students is welcomed at the Boca Helping Hands Food Center, which serves lunch six days a week, Executive Director James Gavrilos said.
“When Fishing for Families in Need makes a donation, we know that lunch the next day will be a healthy, heart-friendly meal that is often beyond the financial reach of our clients,” Gavrilos said.
Nick Metropulos, 18, plans to attend college in the fall, but he said Fishing for Families in Need will continue to operate with another student serving as chief executive officer. He said he plans to continue offering fishing and ocean education to children near the college he attends. 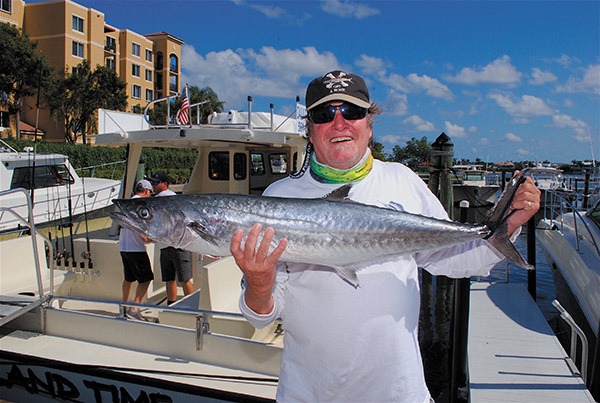 Tom Perry of Ocean Ridge holds the 14.5-pound kingfish he caught Feb. 3 while fishing aboard

the Living on Island Time drift boat. His kingfish hit a dead sardine north of the Lake Worth pier

and was the largest fish caught during an outing for members of the West Palm Beach Fishing Club.

The drift boat is based at the Palm Beach Yacht Center in Hypoluxo.

Palm Beach boat show
This year’s Palm Beach International Boat Show in downtown West Palm Beach will feature more than $1.2 billion in boats, electronics, accessories and clothing along with fishing and diving gear.
Educational events include fishing seminars for adults provided by the IGFA School of Sportfishing and children’s fishing clinics provided by Hook the Future. Show attendees also will be able to sign up for classes in boat handling and docking.
The boat show opens at noon March 23. Regular hours are 10 a.m. to 7 p.m., except on March 26, when the show ends at 6 p.m. Admission: $22 for adults; $12 for ages 6-15; free for children younger than 6. Call 954-764-7642 or go to www.showmanagement.com.

Tip of the month
Boaters who want up-to-date information on navigation hazards, military exercises on the water and other advisories for South Florida waters can check the Coast Guard’s Local Notices to Mariners at www.navcen.uscg.gov.
Select District 7, which includes Florida, Georgia, South Carolina and Puerto Rico.
The Coast Guard also encourages mariners who notice hazards or discrepancies with published information, such as bridge clearances, to report them to the Miami office by calling (305) 535-4472.