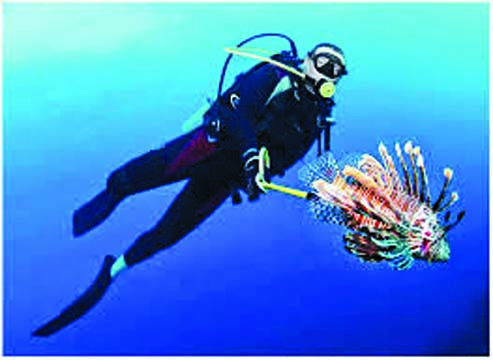 A diver keeps a lionfish at arm’s length to avoid the sharp spines. 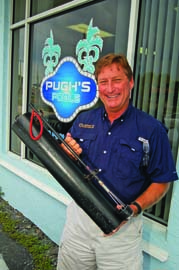 for storing lionfish after they are speared. The invasive fish

have 18 venomous spines on their bodies. Pugh builds his lionfish tubes from PVC pipe.

It’s no secret that invasive lionfish have been wreaking havoc on reefs off the coast of South Florida and many other parts of the state since large numbers of lionfish began showing up in Florida waters around 2005.
Native to the Pacific and Indian oceans, colorful red lionfish degrade Florida reefs by eating native fish and stealing their food, and by eating fish that help keep reef algae in check.
The good news: Lionfish are tasty and easily attainable for divers who know how to handle them and avoid the lionfish’s 18 venomous spines.
Ocean Ridge Mayor Geoff Pugh enjoys harvesting lionfish with a small pole spear, both to clean up the reefs and to provide tasty white meat for his family.
“It’s just like eating a strawberry grouper,” Pugh said of the lionfish. “It’s delicious.”
Pugh grew up in southern Palm Beach County and enjoys fishing and diving when he’s not busy building and maintaining swimming pools through his company, Pugh’s Pools and Spas.
Pugh says he usually finds plenty of good-sized lionfish in 80 to 90 feet of water off Boynton Inlet and other places he likes to dive in central and southern Palm Beach County.
To protect himself from the lionfish’s venomous spines, Pugh developed a storage tube made from a 2-foot section of 4-inch diameter PVC pipe.
Pugh found caps for the ends of his lionfish tube and other parts at Home Depot. He attached a U-shaped bolt on one end so he can remove and replace the cap when he drops a lionfish into the tube. A pair of spring-loaded mop clips mounted on the side of the tube hold his pole spear; another U-bolt is used to clip the tube to his dive gear.
Pugh doesn’t have a formal name for his lionfish storage device, though friend Keith Kovach dubbed it the “lion’s den.”
Pugh said he doesn’t plan to patent or sell his lionfish storage tube. He simply wants to share the idea with others so they can more easily harvest the fish that are damaging Florida’s reefs and native fish.
The mayor knows firsthand how voracious lionfish can be. After putting a lionfish into his aquarium, he watched it triple in size over eight months.
“It was eating everything,” Pugh said. After it ate the family’s clownfish, Pugh finally got rid of the lionfish.
“I pan fried it whole,” he said.
Lionfish prey on more than 70 marine fish and invertebrates, including yellowtail snapper, Nassau grouper and parrotfish, according to the Florida Fish & Wildlife Conservation Commission. They blow water at other fish in an attempt to get their prey to turn around and face them before they go down the hatch.
Lionfish tend to stay in the same place once they find a spot on a reef that satisfies their needs.
Pugh says lionfish are easy to shoot with a short pole spear.
No saltwater fishing license is required to harvest lionfish with a net, pole spear, Hawaiian sling or other spearing devices designed for taking lionfish. A recreational saltwater fishing license is required, unless exempt, to harvest lionfish by other methods, including hook and line. There are no size or bag limits for lionfish.
Note that spears may not be used within 100 yards of a public swimming beach, any public fishing pier or any part of a bridge from which public fishing is allowed. Spears also may not be used within 100 feet of a jetty.
Lionfish must be handled carefully on the cleaning table. Some divers wear puncture-resistant gloves, while others hold the fish by their bony gill plates.
Many divers use scissors to remove the spines before cleaning lionfish, but the fish still should be handled carefully because the venom is present in grooves even at the base of the spines, according to the FWC.
The FWC encourages divers to report harvested lionfish by downloading the Report Florida Lionfish smartphone app or by filling out the lionfish reporting form online at: myfwc.com/fishing/saltwater/recreational/lionfish/report/.

Lionfish derby set for Oct. 18
Divers will be on the hunt for lionfish Oct. 18 during the eBoatListings Lionfish Derby based at Harvey E. Oyer Jr. Park in Boynton Beach.
Prizes will be awarded for the largest, smallest and most lionfish.
Boats carrying divers will leave Boynton Inlet beginning at 8 a.m. The weigh-in is scheduled for 3 p.m. at Harvey E. Oyer Jr. Park. The $100-a-boat entry fee covers up to four divers and includes four T-shirts, four goodie bags and four tickets to the cookout party
following the derby.
The captains meeting is scheduled for 6 p.m. Oct. 16 at the Old Key Lime House restaurant in Lantana. For more information, go to www.eboatlistings.com or call the Lantana Chamber of Commerce at 585-8664.