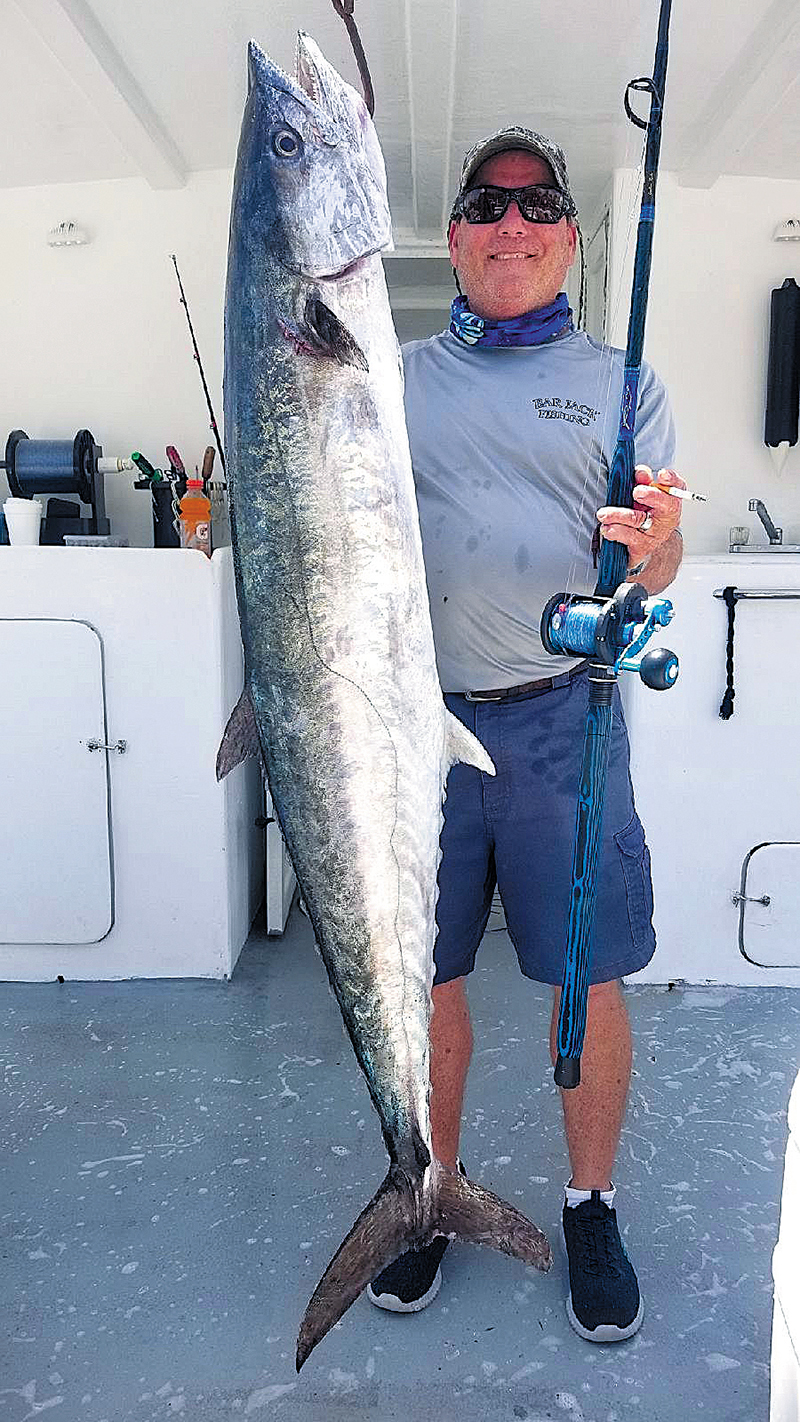 Fishing action heats up with water temperatures during April and May, leading anglers to catches of rod-bending king mackerel, better known as kingfish, along the coast of Palm Beach County.

Kingfish are hard-charging fish that make reels sing and are relatively easy to catch. That makes them tempting targets for a variety of anglers, from drift-boat novices to saltwater tournament veterans.

One of the easiest ways to catch kingfish is a personal favorite: a dead sardine on triple 5/0 hooks topped with a quarter-ounce sinker and a flashy kingfish “duster” that covers the weight and the leader-to-hook connection.

Thread the sardine onto the trio of hooks so that the bait covers the hooks. Use 30- to 50-pound leader (monofilament or fluorocarbon), depending on water clarity. The clearer the water, the lighter the leader.

Start by drifting in 80 to 120 feet of water, watching the depth finder for “marks” of fish below the boat. Drop the bait over the windward side of the boat and let it sink slowly. Kingfish love a falling bait, so watch the reel and engage it if the line starts to fly off the reel.

Check the baits frequently; you could be fishing with bare hooks.

Fighting a kingfish requires steady tension. Anglers who get too excited and create slack in the line often lose toothy kingfish when they bite through the leader.

If the kingfish turns and charges the boat, be prepared to reel fast to wind in the slack. If the fish takes off for Grand Bahama Island, hold the rod tip up and let it run.

The bend in the rod will tire it, assuming the reel drag is properly adjusted.

Other methods for catching kingfish include using live bait, such as goggle-eyes and blue runners. Use wire leader and double hooks to reduce the chance that the kingfish will sever the leader or eat half the bait and miss the hook.

Try rigging live baits with about 2 feet of No. 5 fishing wire holding a 5/0 live-bait hook and connected to the monofilament leader with a small 80-pound swivel — or tie the wire directly to the mono leader with an Albright knot.

Some anglers use trailing treble hooks, or “stingers,” to catch kingfish, especially in tournaments that allow treble hooks. I prefer double J hooks.

Smaller live baits such as pilchards and threadfin herring can be deployed on 3/0 or 4/0 hooks tied to about 6 inches of light fishing wire, then attached to the leader with a small swivel or Albright knot.

Kingfish are oily fish, making them good candidates for smoking. Try soaking the meat overnight in the refrigerator in water mixed with kosher salt and brown sugar. Then dry it and smoke it at 200 degrees or so for about four hours.

Mix the smoked kingfish with mayonnaise to create a dip that can be served on crackers with hot sauce or a jalapeño slice. (Every angler seems to have his or her own favorite recipe for smoked kingfish dip.)

Smaller kingfish also can be marinated in mojo or Italian salad dressing, then grilled.

Healthy adults should limit consumption and avoid kingfish over 31 inches, according to the state.

Regulations for kingfish include a minimum size of 24 inches (measured to the fork of the tail). Daily bag limit is two kingfish per angler.

The Palm Beach International Boat Show and the Superyacht Show, originally set for March 26-29, have been postponed until further notice. As of late March, www.pbboatshow.com listed May 14-17 as new dates for the shows.

The Boynton Beach Firefighters Fishing Tournament and Chili Cook-Off, set for April 18, was canceled because of coronavirus concerns. It’s possible the tournament could be rescheduled. For updates, go to www.boyntonbeachfirefighters.com.

The kickoff party for the Lantana Fishing Derby and Kids Derby has been postponed until the second week of April. As of mid-March, the captain’s party was still set for April 30, followed by fishing May 2 and the awards party May 3. Go to www.lantanafishingderby.com.

The West Palm Beach Fishing Club’s annual yard sale, originally set for April 18, has been postponed until further notice. Some club meetings have been canceled. For updates, call 561-832-6780 or go to www.westpalmbeachfishingclub.org.