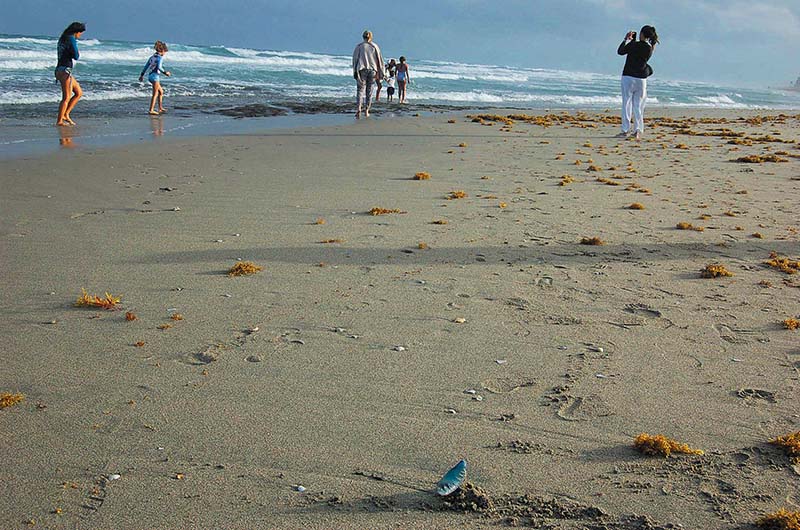 Scavenging the wrack zone for shells and sea beans can fill collectors’ baskets and pique the curiosity of anyone interested in the origins of things deposited on the sand.

To learn a bit more about the many things that wash ashore, I attended one of the free Beach Treasures outings offered by Gumbo Limbo Nature Center.

Our beach guide and instructor, Debbie Wilson, began our session with a classroom talk at Gumbo Limbo to give us some idea of what to look for before we hit the beach.

Wilson showed us several types of seashells and the marine animals that live in them, as well as corals, sponges, sea stars, volcanic rock, sandstone, sea glass and “sea beans” or seed pods from plants, many from far-away places. 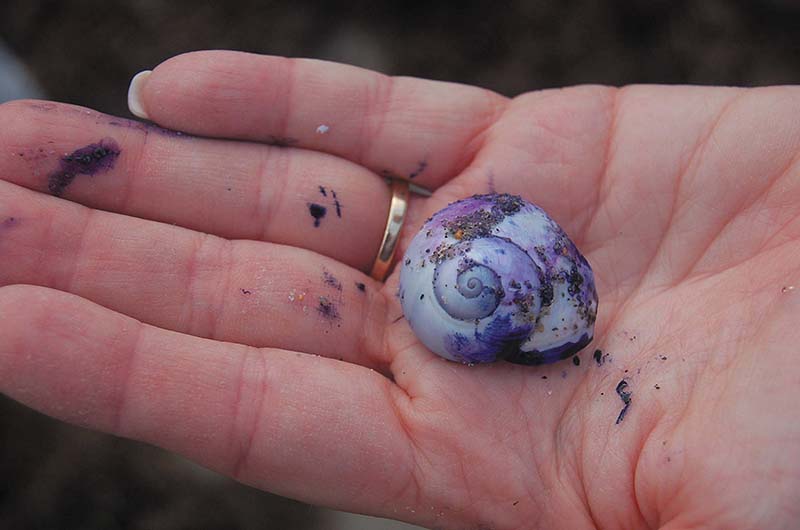 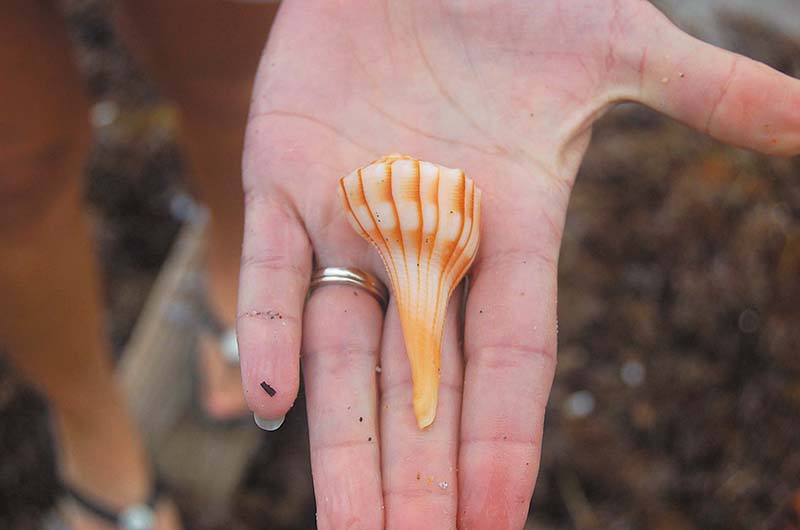 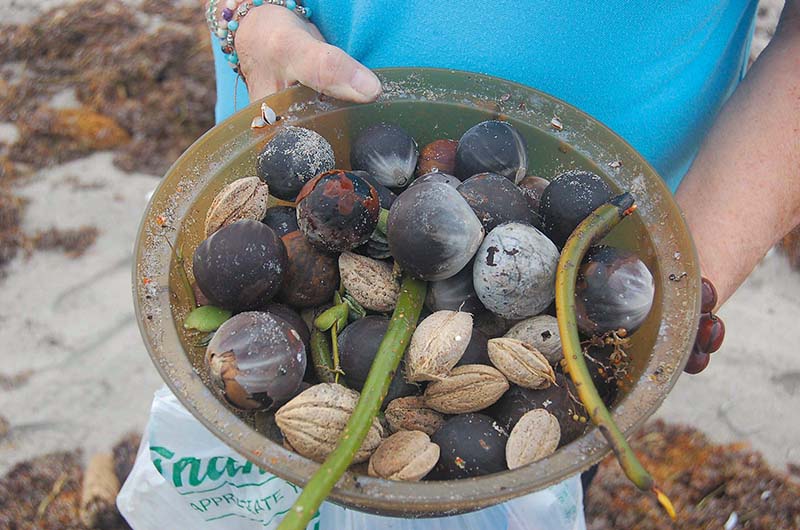 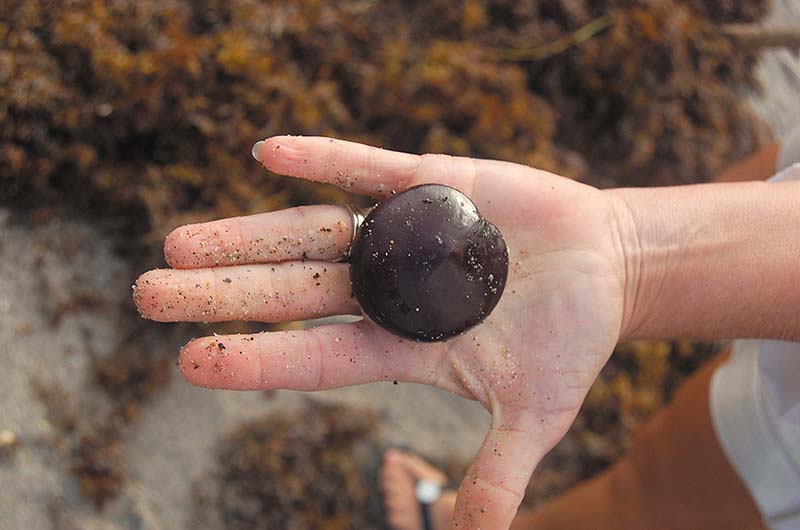 After Wilson’s classroom talk, we drove to Red Reef Park — where we did not have to pay for parking — and headed onto the beach, where we found strong wind, piles of decaying Sargasso weed and purple Portuguese men-of-war, which we avoided after being warned about their venomous tentacles.

A flip-flop on the sand was covered in gooseneck barnacles, a sign that it had been drifting for a while. Some members of our group were rewarded with treasures, such as the shells of the purple sea snail and the lightning whelk.

“It’s really good for the kids to be out here,” said Jennifer Longinos of Delray Beach, whose son found a purple sea snail.
Allison McCarrick, a winter resident of Lake Worth, used a stick to sift through decaying mats of Sargasso weed to find a sea heart — a handsome, dark-brown seed pod shaped like a heart.

Impossible to ignore was the rubbish on the beach, including plastic bags, baby shoes, flip-flops, drink bottles, shards of plastic and a tiny glass ampule containing something, possibly perfume.

We left the beach with bags of trash to throw away and with a few natural treasures to take home.

Anglers fishing for sharks from Florida beaches will be required to take a class and obtain a free shore-based shark fishing permit under rules approved Feb. 20 by the Florida Fish & Wildlife Conservation Commission.

The new FWC rules, effective July 1, follow months of public workshops held to address growing concerns that shark fishing from the beach endangers swimmers and harms sharks that are sometimes dragged onto beaches for photos before being released.
Some of the new rules apply to anglers targeting sharks from boats as well as from beaches.

In addition to mandatory education to obtain a shore-based shark fishing permit, the new rules will:

• Require the use of non-offset, non-stainless steel circle hooks when targeting sharks — from land or from a boat.

• Require anglers to cut the leader, line or hook to prevent the delayed release of sharks that are protected from harvest. Twenty-six species of sharks, such as hammerhead, lemon and Caribbean reef sharks, cannot be possessed or harvested in Florida.

• Require anglers to keep protected sharks in the water while releasing them from land or from a boat.

• Require anglers targeting sharks, from land or from a boat, to carry a device that can quickly cut a hook or leader to release a shark.

The ban on live harvest of marine life does not affect hook-and-line fishing, cast netting or the legal harvest of spiny lobster in the Blue Heron Bridge area. Boaters carrying live fish legally taken from other areas will be allowed to transport them through the sanctuary.

The 34th annual Palm Beach International Boat show — featuring $1.2 billion worth of boats and accessories on display as well as fishing seminars for adults and children — is set for March 28-31 along Flagler Drive in downtown West Palm Beach.

Hook the Future will present free fishing clinics for kids on March 30 and 31.

Experts with the IGFA School of Sportfishing will offer adult fishing seminars, free with admission, throughout the show.

For information on tickets, parking and transportation maps, visit PBBoatshow.com.

The Naked Warrior Project and 26 North Yachts will host a fishing tournament March 9 to raise money to memorialize fallen Navy SEALs and to help injured SEALs and their families.

The entry fee is $500 per boat. Fishing teams can register and pay online at nakedwarriorproject.org or at 26 North Yachts, 2525 Marina Bay Drive in Fort Lauderdale.

The nonprofit Naked Warrior Project was founded by John Owens, whose brother, Ryan, a Navy SEAL, was killed in action in 2017.

Lionfish have been found with ulcers that expose muscle tissue. Anyone who finds such a lionfish is being asked to note the number of fish affected and the location. Take photographs if possible.

Reports can be submitted through the FWC Reporter smartphone app or by calling the Fish Kill Hotline at 800-636-0511. 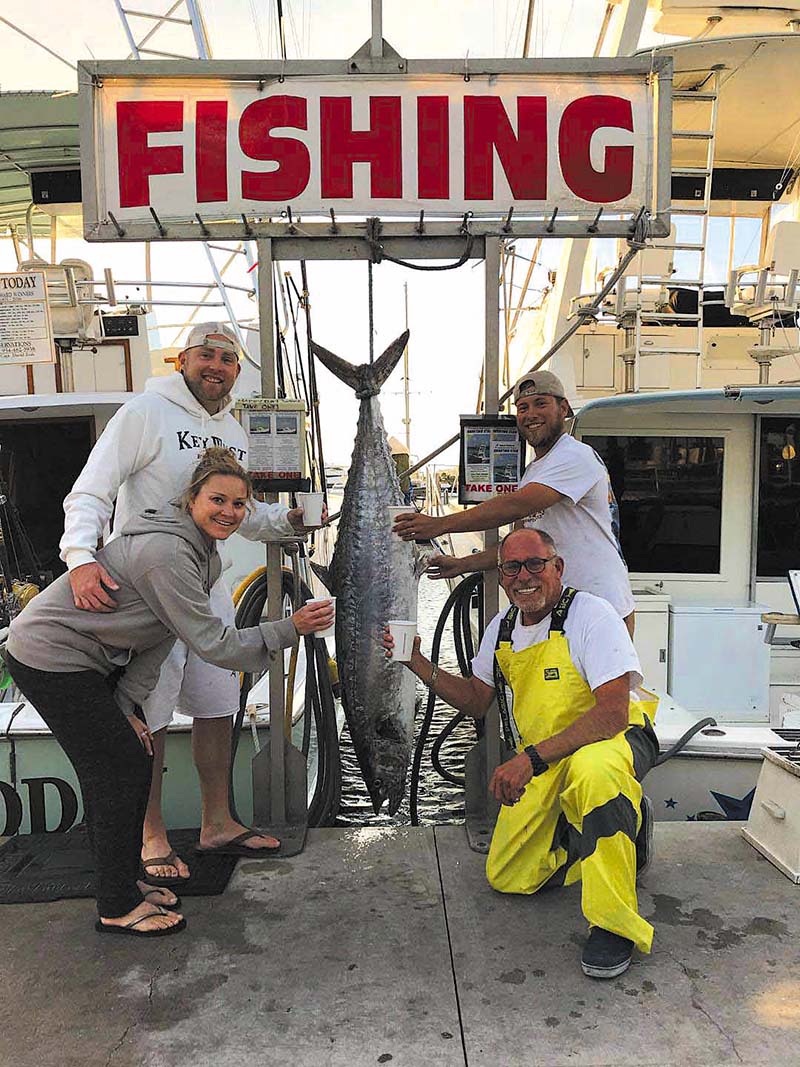 Mike and Brooke Hayes were visiting Fort Lauderdale during their honeymoon in January when they decided to take a half-day fishing trip aboard the Happy Day Today charter boat.

Fishing with Capt. J.B. Sirgany and mate Troy McDonald, Mike Hayes caught a kingfish so big it could have broken a 20-year-old world record — if it had been caught on different tackle.

Jack Vitek, chief of staff for the International Game Fish Association, which verifies world records, said the IGFA would not consider the kingfish for world-record status because IGFA rules prohibit the use of treble hooks when fishing with live bait.

The Happy Day Today crew was fishing a drop-off along the coast of Fort Lauderdale. Mike Hayes fought the fish for an hour and 53 minutes.

The all-tackle world record for king mackerel, better known as kingfish, is 93 pounds. Steve Graulau caught that kingfish in April 1999 off San Juan, Puerto Rico. The Florida record kingfish — 90 pounds — was caught in 1976 by Norton Thomton off Key West.

Want to fish spring tournaments for kingfish, dolphin and wahoo? If so, start planning. The KDW tournament season kicks off April 6 with the Boynton Beach Firefighters Fishing Tournament and Firehouse Chili Cookoff. (Visit boyntonbeachfirefighters.com). The Lantana Fishing Derby is set for May 4. (Visit lantanafishingderby.com). Discounts apply for early entry.