The Fish Rules app is location-specific and works on either an Android or an iPhone.

Remember the correct slot size limit, bag limit and open seasons for snook?
What about the bag limit for pompano or the minimum sizes for mutton, yellowtail and vermilion snapper? Can you keep bonefish or a tarpon?
Not sure? You’re not alone.
Florida has way too many saltwater fishing regulations to memorize — and they change based on the angler’s location.
Different regulations apply in federal waters (more than three miles off Florida’s east coast) and in the Gulf of Mexico than in state waters along the east coast.
Three different bag limits (number of fish anglers are allowed to keep per day) apply for spotted sea trout, depending on which part of Florida you’re fishing in.
In the old days, anglers carried crumpled fishing regulation brochures in plastic bags that eventually succumbed to the sun and salt water.
Now there’s a simple way to keep fishing regulations at your fingertips: the Fish Rules app for smartphones.
Fish Rules is free. And it’s “smart.”
The app uses your smartphone’s GPS and calendar to show the regulations that apply based on the date and your location. (Users who lose their signals can manually set their locations to show which regulations apply.)
The location system in Fish Rules is so sensitive that an angler could stand on the Atlantic Ocean side of a bridge in the Florida Keys and see the Atlantic fishing regulations, then walk across the bridge to the Gulf side and get the Gulf of Mexico regulations, said Albrey Arrington, a Jupiter fisheries scientist who developed Fish Rules with app architect Rick Blalock.
“The fact that regulations are sorted by your location is the most awesome feature of the app,” Arrington said. “Few people understand all the location complexities of fish regulations in Florida.”
A note to users: Location services must be enabled for the app to take into account the angler’s location. Those who choose to set their locations manually should do so using the map or their GPS coordinates, Arrington said.
Fish Rules made its debut in 2012 and has since been upgraded to include saltwater fishing regulations for the Atlantic and Gulf coasts from Maine to Texas — plus the Bahamas. The app updates itself every time it is opened.
Fish Rules works on iPhone or Android platforms. It’s available in the app store or through the company’s website, www.fishrulesapp.com.
Anglers can browse saltwater regulations on the website. There’s also a Fish Rules app page on Facebook for those who enjoy viewing or posting fishing and boating photos.
Arrington said Fish Rules operates on a small amount of advertising revenue along with grant money from the Fish Florida (sailfish) license tag, from the Bahamas Reef Environmental Education Foundation and from NOAA Fisheries.
“We want people to understand and abide by fishing regulations,” Arrington said.

FWC incentives encourage divers to take lionfish
The Florida Fish & Wildlife Conservation Commission approved incentives in April that encourage divers to harvest more lionfish — the non-native fish with venomous spines that eats native fish, steals their food and is taking over Florida fish habitat.
Divers will be able to harvest an additional lobster each day during the two-day spiny lobster sport season — if they qualify by first documenting the harvest of 50 or more lionfish.
Divers can qualify for the extra mini-season lobsters by taking at least 50 lionfish between Lionfish Removal and Awareness Day (May 14) and the mini lobster season, set for July 27-28 this year.
If they remove 50 or more lionfish between May 14 and Sept. 30, divers will each receive a commemorative coin and T-shirt, be featured in the FWC’s Lionfish Hall of Fame (on the FWC’s website) and be entered into drawings for prizes such as fishing licenses, lionfish harvesting gear, fuel cards and tank refills.
Lionfish harvests must be documented through an FWC-approved process, such as a lionfish derby or an approved check-in station.
The FWC is working to establish lionfish check-in stations before May 14. Check-in stations will be listed on the website.
The diver who checks in the most lionfish between May 14 and Sept. 30 will be crowned Florida’s Lionfish King (or Queen), will receive a lifetime saltwater fishing license and will have his or her photo featured on the cover of the January 2017 saltwater fishing regulations brochure.
For details about lionfish and the Lionfish Removal and Awareness Day Festival set for May 14-15 in Pensacola, go to www.myfwc.com/lionfish.

Delray fishing exhibit set to open June 17
Fish Tales!, the Delray Beach Historical Society’s fishing history exhibit, is scheduled to open with a kickoff party set for the evening of June 17.
The opening party will feature food and music and will be held on the grounds of the historical society at 3 NE First St. in Delray Beach.
The historical society still is looking for fishing photos, newspaper clippings, trophy fish mounts and fishing memorabilia (especially from the Delray Beach area) for the Fish Tales! exhibit.
Anyone with something to be considered for the fishing history exhibit should call the historical society at 274-9578 or email archive@delraybeachhistory.org.
May 13 is the deadline for submissions. 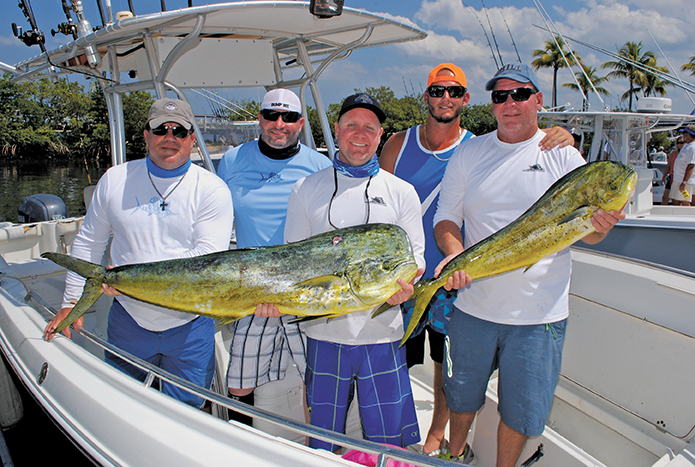 Boynton Firefighters event
Kingfish dominated the weigh-in scales during the April 23 Boynton Beach Firefighters Fishing Tournament & Firehouse Chili Cookoff, but anglers also managed to catch a few nice-sized dolphin and small wahoo.
Alex Burgess of Lake Worth and his team on Seapremacy boated the heaviest fish of the 122-boat tournament — a 53.4-pound kingfish — by slow-trolling live bait in 145 feet off Juno Beach.
Burgess said he and team members Mike Wood and Jim Wood also caught 25- and 40-pound kingfish before the really big kingfish hit a live goggle-eye around 12:30 p.m. to win his team $1,500.
“This time of year, there are a lot of big kingfish around,” Burgess said, noting that his team had to put its time in to catch a fish over 50 pounds. “It’s just a waiting game.”
Tournament veteran Bill Wummer and his team on Spiced Rum III placed a close second in the kingfish category with a 49.9-pound kingfish, caught on a slow-trolled blue runner in the same area Burgess was fishing off Juno Beach.
The kingfish bite was so strong in the firefighters’ tournament that it took a kingfish over 40 pounds to win money and earn a spot on the scoreboard.
Keith Bach, fishing with team GAFR, caught a 35.8-pound dolphin (mahi mahi) in 850 feet of water off Lake Worth to win the dolphin category.
The GAFR team stopped near a patch of floating Sargassum and pitched out a jig to catch a smaller cow, or female, dolphin.
When the big bull dolphin followed the cow to the boat, Bach pitched a live goggle-eye out, hooked up and fought the fish for 25 minutes before it was close enough to gaff.
Wahoo brought to the scales were small. The winning ’hoo, caught by team Double Ds, weighed only 17.4 pounds.

Tip of the month
National Safe Boating Week is held in May every year to remind boaters to check their boats’ safety gear and review their boating skills.
Basic gear includes: a Coast Guard-approved life jacket of the correct size for each person onboard; a fire extinguisher; emergency flares; a sound-producing device (horn or whistle); running lights in working order; and a throwable flotation device.         On May 21-22, the Coast Guard Auxiliary Flotilla 54 will conduct free vessel safety checks at the Sportsman’s Park boat ramps in Lantana and the Harvey E. Oyer Jr. boat ramps in Boynton Beach. (Call Bruce Parmett at 818-7905.) The flotilla also will man a safety table set up at the West Marine store, 2275 S. Federal Highway in Delray Beach.