November’s northerly winds bring sailfish to South Florida waters, creating an opportunity for anglers who enjoy catching and releasing billfish — but also a responsibility for those who don’t intend to catch a sailfish but suddenly find one stripping line from a reel and leaping from the waves.

Almost all sailfish are released. Anglers must have a federal HMS angling permit to keep one, and the sailfish must be at least 63 inches long (measured from the tip of the lower jaw to the fork of the tail) to be legal to keep.

That means ocean anglers must be prepared to release sailfish in good condition. Sailfish, Florida’s official saltwater fish, are prone to acrobatic jumps and head shaking at the surface in attempts to throw the hook.

After the fish settles down and can be held alongside the boat, remove the hook, if possible, or cut the line as close to the hook as possible. Non-offset circle hooks such as these 7/0 Mustads are commonly used by anglers targeting sailfish with live bait. The backswept point of a circle hook is less likely to snag soft tissue inside a fish than a traditional J hook.

Wear gloves before trying to grab the bill. Hold the fish in the water, gripping the bill a few inches above the mouth with two hands, thumb touching thumb. After the sailfish is stabilized on the surface, keep the boat moving slowly forward so the sailfish can extract oxygen from the water and regain strength. When the sailfish begins to kick with its tail, set it free.

The reviving process might take five minutes. A caught sailfish is like a boxer winded after a long bout. Generally, the longer the fight, the more exhausted the sailfish will be and the longer it should be revived. 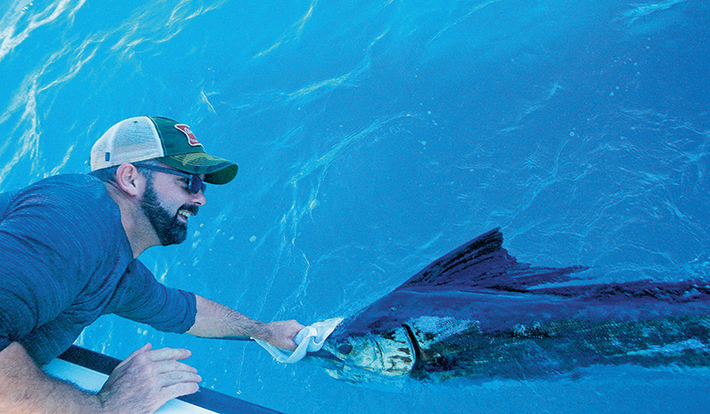 James Swanwick revives his first sailfish, taken on a live pilchard in 100 feet of water straight outside Palm Beach Inlet, in January. The boat is moving slowly forward, pushing water over the sailfish’s gills so it can regain strength.

The resuscitation process creates time for photographs and short videos. Show the angler holding the sailfish in the water while it’s being revived. Have the captain move the boat so the sun illuminates the fish and the person holding it. Don’t forget to maintain a good grip on your cellphone or use the strap on your camera to avoid losing it overboard.

Avoid the temptation to haul a sailfish into the boat for photos.

Federal fisheries laws require anglers to release sailfish and other billfish “in a manner that will ensure maximum probability of survival, but without removing fish from the water.”
It’s acceptable to lift the fish’s head out of the water, briefly, for a photo while leaving most of the fish in the water.

Catching and releasing sailfish is not overly difficult during the cool months, November through April. No need to bother with fishing kites, though kite fishing is a popular and effective method for catching sailfish.

Live goggle-eyes, pilchards or threadfin herring attached to a 7/0 non-offset circle hook will catch sailfish. Smaller hooks can be used for smaller baits. Try using a live bait rod fitted with a conventional reel holding 20- to 30-pound main line and 30- to 40-pound leader.

Non-offset circle hooks (mandatory in sailfish tournaments) are recommended for sailfish because they’re designed to slide over soft tissue inside the fish’s mouth and lodge in the corner of the jaw, minimizing damage.

If you’re setting up your boat to drift over a reef for kingfish and snapper, put the live bait intended for sailfish out first and let it move 150 feet or so behind the boat before stopping. That should keep the bait from swimming back under the boat and wrapping around the other lines, but check the bait periodically just in case it has a case of wanderlust.

When a sailfish hits and feels the hook, it’s likely to jump. If it’s connected to your rod, have an angler gradually tighten the drag on the reel and fight the fish. Bring in the other lines and prepare to move the boat slowly toward the fish to regain line.

Have someone on the boat shoot photos or videos during the fight. Sailfish often make spectacular jumps, sometimes close to the boat. Photos of the angler battling a sailfish can be just as exciting.

Ft. Lauderdale boat show is on despite pandemic
The 61st annual Fort Lauderdale International Boat Show was scheduled for Oct. 28 to Nov. 1 at seven locations along the waterfront despite challenges posed by the coronavirus pandemic.
Producer Informa U.S. Boat Shows says extra cleaning, hand-sanitizing, touch-free ticketing and social distancing are part of the show. Extra entrance points aim to minimize lines, and docks are wider — up to 30 feet.
All exhibitors and attendees must wear face coverings.
The Fort Lauderdale boat show is the largest in-water boat show in the world, with more than 80% of the show taking place in open-air spaces, according to the Marine Industries Association of South Florida, which owns the show.
Show hours are 10 a.m. to 7 p.m. (except on Nov. 1, when the show closes at 6 p.m.) Adult admission is $35. Call 954-463-6762 or visit www.flibs.com.

Nautical flea market set for Nov. 14-15
The 12th annual Palm Beach Marine Flea Market and West Palm Beach Seafood Festival is set for Nov. 14-15 at the South Florida Fairgrounds, 9067 Southern Blvd.
The market, 9 a.m. to 5 p.m. each day, will feature new and used boats for sale along with boating and fishing gear and marine accessories.
Adult admission is $10. Youths 12 and under will be admitted free. For details, visit www.flnauticalfleamarket.com.

Manatee zones take effect Nov. 15
Seasonal speed zones that require boaters to slow down to avoid striking manatees begin Nov. 15 and continue through March 31 in Palm Beach County.
The area around Florida Power & Light Co.’s Riviera Beach power plant (south of Peanut Island) is one of the most manatee-sensitive areas in Palm Beach County. Manatees are attracted to warm-water discharges from the power plant during cold weather.
Boat operators should wear polarized sunglasses and avoid boating over shallow sea grass beds to reduce the chance of hitting manatees.
Boaters who encounter a sick, dead or injured manatee should call the state’s Wildlife Alert Hotline at 888-404-3922.

Bahamas updates COVID guidelines
Boaters headed to the Bahamas still must present a negative COVID-19 swab test (less than seven days before arrival), but the requirement that visitors “vacation in place” expires Nov. 1, meaning they can move around beyond the confines of their accommodations.
To enter the Bahamas, visitors must obtain a negative COVID swab test and apply for a Bahamas Health Travel Visa at www.travel.gov.bs. Click on the international tab to upload the test results.
In addition, Bahamas visitors will be subject to a rapid antigen test upon arrival and four days (96 hours) after arrival. Details: www.bahamasmarinas.com/procedures-and-protocols.

Tip of the month
Want to better understand all the notes and symbols on nautical charts? Download NOAA’s free U.S. Chart No. 1 at www.nauticalcharts.noaa.gov/publications/us-chart-1.html.