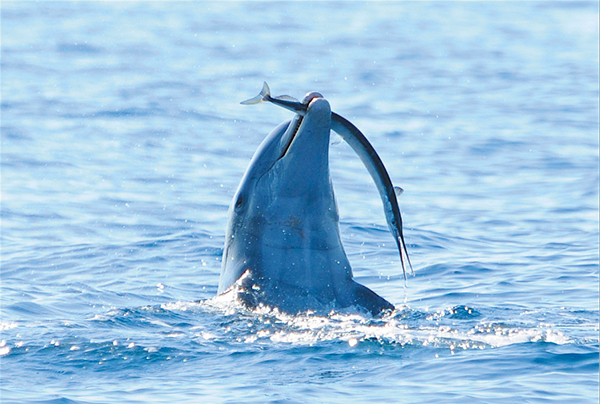 A bottlenose dolphin captures a houndfish off Palm Beach. Scientists with the Taras Oceanographic Foundation’s Palm Beach Dolphin Project, which began offering dolphin-watching tours to the public in January, shot the photo.

Seeing a bottlenose dolphin in the wild is not that uncommon for boaters in South Florida, though I must admit that I’ve gone for months without seeing one, even though I spend three or four days a week on the ocean.
Knowing where to look makes a big difference, as I discovered during a dolphin-watching cruise aboard the 32-foot Osprey with Stefan Harzen, director of the Taras Oceanographic Foundation. The Jupiter-based nonprofit’s scientists have been studying Palm Beach County’s wild dolphins for more than a decade. (That’s dolphin, the air-breathing marine mammal, not dolphinfish.)
We started our afternoon dolphin trip in late February from Sailfish Marina in Palm Beach Shores, where Capt. Chris Thalmann helped everyone don an inflatable life jacket before we stepped aboard the 32-foot Osprey — a spotless hard-bottom inflatable boat rigged for touring with saddle-style seats in the bow.
As we moved into the ocean outside Lake Worth Inlet (aka Palm Beach Inlet), Harzen encouraged all of us to watch the water for signs of bottlenose dolphin while he shared a few details about Palm Beach County’s dolphin population.
About 400 bottlenose dolphins live in the waters between Jupiter Inlet and Boynton Inlet, the foundation’s primary study area. Most live here all the time, while others come down seasonally, like snowbirds, and still others appear once every few years.
Adult dolphins are 10 to 12 feet long and weigh about 600 pounds. They live 50 to 60 years in the wild and can swim 35 mph in short bursts, sort of like a person sprinting, Harzen said. They spend much of their day searching for food because they eat about 25 pounds of fish and crustaceans daily.
Most of the county’s bottlenose dolphins live in shallow water, between 60 feet of water and the beach. Atlantic spotted dolphins, a separate species with distinctive spots, are usually found in deeper water offshore.
Less than 30 minutes into our cruise on a cloudy afternoon, George Kaufenberg, visiting from Minnesota, pointed out a dolphin snout jutting out of the waves in 23 feet of water just north of Mar-a-Lago.
A few seconds later, two dolphins appeared on the surface and swam alongside the Osprey. They came up for air a few times before going on their way.
Thalmann kept the boat headed south along the beach and did not attempt to steer close to the dolphins.
Harzen’s dolphin research permit allows him to approach closer, but part of the mission of the Palm Beach Dolphin Project is to teach proper dolphin-watching etiquette.
Harzen handed out postcard-size information cards that instruct boaters to stay 300 feet away from dolphins and to move away slowly if the dolphins demonstrate signs of stress, such as tail slapping. The instructions warn boaters not to touch, feed or swim with dolphins.
Those were the only dolphins we spotted on our afternoon cruise, but Harzen noted that dolphins lingered around the boat for an hour during the morning cruise in the waters off John D. MacArthur Beach State Park.
These are wild animals and, as the foundation’s website notes, Mother Nature does not guarantee anything. Harzen said his groups see dolphins on eight out of 10 cruises. If no dolphins are spotted, participants can return for another cruise free of charge.
Three-hour dolphin-watching cruises cost $85 for adults and $65 for youths ages 10-16.
For details, go to www.palmbeachdolphintours.com or call 855-346-7400. Organizers generally give participants two days’ notice if a cruise will be canceled because of weather.
For a trip-booking calendar containing dates, times and departure locations, go to www.dolphinexpeditions.starboardsuite.com. 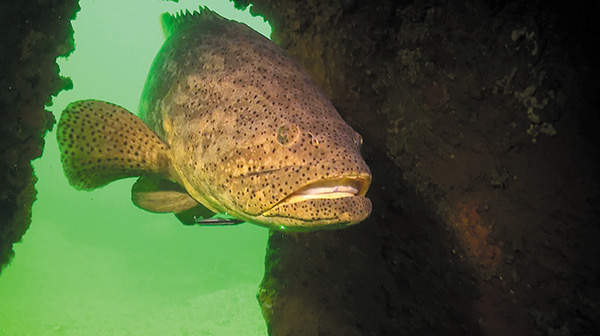 Goliath groupers such as this one are often found in ships scuttled for artificial reefs. Photo provided by FWC

FWC set to discuss limited goliath grouper harvest
Divers and anglers are expected to attend the Florida Fish & Wildlife Conservation Commission’s April 25-26 meeting in Fort Lauderdale, where commissioners are scheduled to discuss the possibility of allowing a limited harvest of goliath grouper — a large, slow-growing grouper that has been protected from harvest since 1990.
The commission is expected to consider more than 5,000 public comments on the possibility of allowing a limited harvest of goliath grouper. Comments were submitted online and in public workshops such as the one held July 31, 2017, at the Lantana branch library.
Several Palm Beach County divers have adamantly opposed the possibility of allowing anglers to keep a limited number of goliath grouper, noting how the groupers attract divers from around the world when they gather on wrecks during the summer.
Divers from Palm Beach and Broward counties are expected to show their opposition to the goliath grouper harvest proposal during the FWC meeting, said Ed Tichenor, director of Palm Beach County Reef Rescue.
Some anglers have supported the proposed limited harvest, noting that it could benefit research on goliath grouper if the carcasses of caught fish were given to FWC biologists.
Goliath grouper populations have “substantially” recovered, but not fully recovered, the FWC says.
The April FWC meeting will be held at the Fort Lauderdale Marriott North, 6650 N. Andrews Ave.

The Blue Wild Ocean Adventure Expo, featuring experts on scuba diving, free diving, spearfishing, underwater photography, paddleboarding and dive destinations, is set for April 14-15 in Fort Lauderdale.
Longtime Boca Raton resident Sheri Daye founded The Blue Wild Ocean 11 years ago as a way to gather ocean lovers together and to benefit the Twin Palms Center for the Disabled in Boca Raton. Daye is an avid scuba diver, free diver and spearfisher.
Experts will share tips on a wide range of topics, including fishing knots, cooking lionfish, spear-gun rigging, fish filleting and adventure travel.
“What began as a small charity event has evolved into an exciting, must-attend event,” Daye said. “For marine art fans, we truly have one of the country’s most impressive collections.”
Hours are 10 a.m. to 7 p.m. both days at Broward County Convention Center, 1950 Eisenhower Blvd. Admission is $20. The event is free for children younger than 12. For details, go to www.thebluewild.com.

West Marine opens in Lantana, donates to youth
On March 17, West Marine, a “waterlife outfitter” store, celebrated the opening of its new 9,000-square-foot location at 1385 South Dixie Highway, Lantana. That day, it donated 10 percent of its sales, up to $3,000, to the Youth Sailing Foundation of the Palm Beaches and West Marine’s nonprofit BlueFuture program.
West Marine, an outfitter for cruisers, sailors, anglers and paddle-sports enthusiasts, has 250 stores and an eCommerce website.
For more information, visit www.westmarine.com