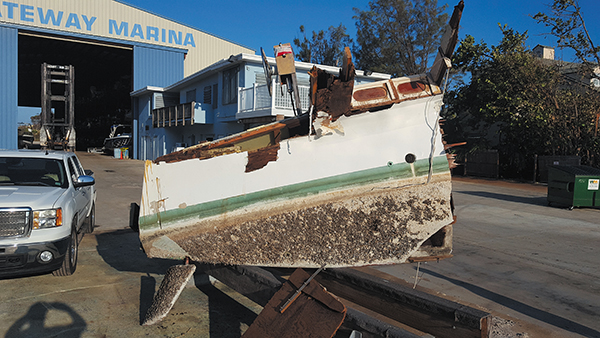 ABOVE: Part of a trimaran sailboat broke loose during Hurricane Irma and wedged under floating docks at Gateway Marina. The incident caused $90,000 in damage to the docks. Photo provided by Gateway Marina

BELOW: Shredded sails, a tarp and algae covering the bottom are telltale signs that this sailboat is likely to stay in the area for more than a few days. Willie Howard/The Coastal Star 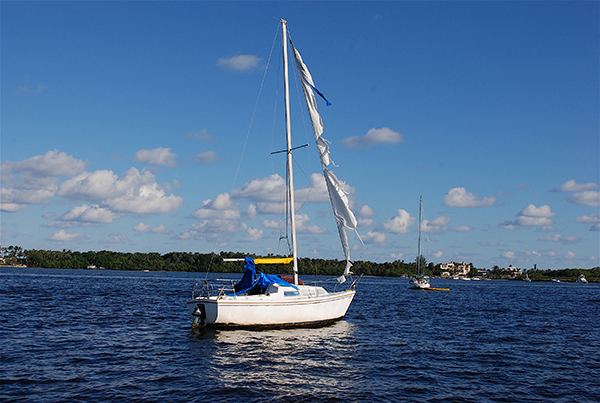 Gateway Marina owner Chris Ciasulli knows firsthand the financial hazards posed by boats that drop anchor in the Lake Worth Lagoon near Boynton Inlet.
A trimaran sailboat anchored near his marina broke loose during Hurricane Irma, came apart and wedged under four sections of the marina’s floating aluminum docks, causing $90,000 in damage. The docks were not insured.
Ciasulli said he met with the owner of the sailboat, Michael Yesilevich, 44, of Delray Beach, who apologized but offered no compensation for the damages.
Boynton Beach police said Yesilevich had two or three boats anchored in the area that were advertised for sale on Craigslist at the time of the hurricane.
His trimaran was not considered derelict before the hurricane, police said. Officers with the Police Department’s marine unit tried to persuade him to move the 1982 sailboat to another location before Irma’s winds arrived in September, but they were not successful.
“A common misconception is that all sailboats anchored or moored that do not move are derelict,” said Officer Darin Hederian of the Boynton Beach Police Department’s marine unit. “If the vessels are dewatering, not sunk, not aground and not in disrepair, they are probably not going to be classified as derelict.”
Boats at anchor are required to have a current registration and proper lighting. White anchor lights are supposed to be displayed at night so boaters can steer clear of anchored vessels after dark. Boynton Beach police marine unit officers say they issue citations to boat owners for improper lighting.
Ciasulli and several waterfront homeowners in Boynton Beach said they are frustrated with a system that allows sometimes shabby boats to be anchored in the lagoon, often with no insurance and no limit on the length of time they can stay.
“You can anchor wherever you want,” Ciasulli said. “If it survives, fine. If not, your headache’s gone.”
Harry Woodworth, who lives on the water in Yachtsman’s Cove, said three boats dropped anchor inside Boynton Inlet after Hurricane Irma. Two of them broke loose during windy conditions in November.
“The minute they sink on my property, I have the $15,000 problem,” Woodworth said.
It’s illegal to anchor “at-risk” boats in state waters.
Florida law (327.4107) defines “at risk” as boats that are taking on water without an effective means of dewatering, such as a bilge pump.
Boats that are not sealed to the elements as originally designed and boats that are in danger of breaking loose from their anchors also could be classified as at risk of becoming derelict.
“It’s an ongoing issue because there’s a fine line between derelict and someone’s boat,” said Officer Gregg Koch of the Boynton Beach Police Department’s marine unit.
Jim DeVoursney, a waterfront homeowner and member of the Inlet Communities Association, said the number of older boats dropping anchor inside Boynton Inlet began growing during the spring of 2017.
“It’s a bad thing for Boynton Beach and the value of these homes to have this become a boat graveyard,” DeVoursey said.
The problem is not unique to Boynton Beach.
Dozens of boats, some in poor condition, are moored inside Lake Worth Inlet near Peanut Island. Farther north, Jupiter officials are grappling with old boats dropping anchor near county parks, where access to land is easy.
Kevin Homer, a Boynton Beach waterfront homeowner, said he plans to ask city commissioners to hire a maritime lawyer to address the problem of boats dropping anchor inside Boynton Inlet. Homer said old boats pose environmental hazards if they leak fuel or dump human waste and become hazards to navigation if they sink.
“We’re the ones paying taxes here,” Homer said, referring to homeowners. “Why should these people [boat owners] not have to pay rent or pay taxes?” 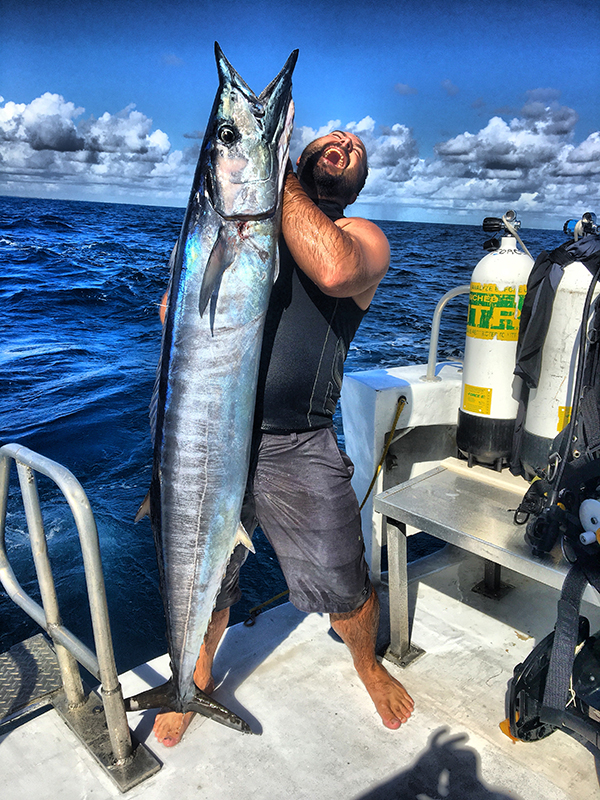 Adam Birdwell, operator of the Boynton Beach dive charter Starfish Scuba, shows off a 53-pound wahoo he speared Dec. 1 while diving off Jupiter. Birdwell had been reef diving in 100 feet of water and had paused in 20 feet of water for a safety stop. The wahoo swam within a few feet of him, as if daring him to spear it. After Birdwell shot the wahoo, it dragged him for a while, trying to avoid a bull shark. Birdwell, who says he has been diving nearly 4,000 times, was using a locally built Koah spear gun. Photo provided by Adam Birdwell

Tip of the month
Manatees move into the warm waters of South Florida during the winter. Slow-speed zones for boaters took effect Nov. 15. To avoid manatees, boaters should wear polarized sunglasses, stay in deep, marked channels as much as possible and watch for the snouts and tails of manatees on the surface.
The Save the Manatee Club offers free resources for boaters, including a boating safety packet that includes the hotline number — 888-404-3922 — for reporting manatee injuries and harassment. The club’s Manatee Alert app for iPhones and iPads helps alert boaters when they’re near manatee zones and displays zone maps. For details, call 800-432-5646.