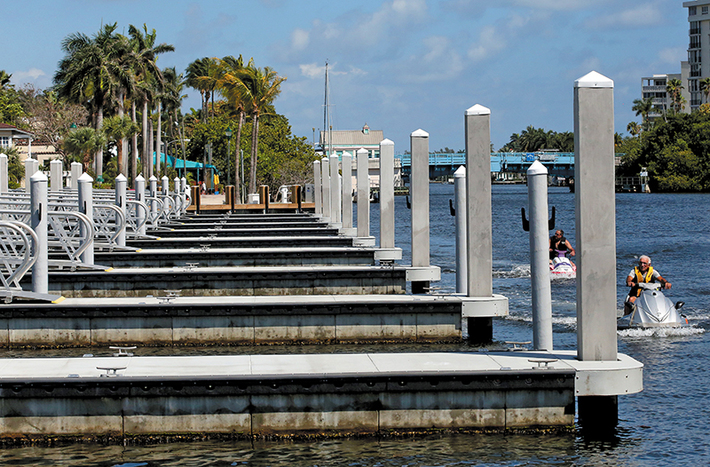 The Delray Beach Municipal Marina, at 159 Marine Way, was closed for nearly two years during a $3 million renovation that included raising the seawall and improving boater amenities. The marina provides 24 rental slips for boats from 30 feet to 60 feet in length. Photos by Tim Stepien/The Coastal Star

Boaters were expected to move into slips at the renovated Delray Beach Municipal Marina in late March — nearly two years after they left for a marina makeover that included raising the seawall to block high-tide flooding on Marine Way.

The city held a ribbon-cutting with residents and commissioners to announce the completion of the marina renovations on Feb. 19.

But as of mid-March, city officials still were working with contractors to correct punch-list items at the renovated laundry and shower building at the south end of the marina, and boaters were still waiting to move into the slips.

Boat owners, some of whom lived on their boats, had to leave the marina in April 2019. Boaters who previously lived on their boats at the city marina have priority for the renovated slips.

The boaters are eager to come back, said Sam Metott, director of the Delray Beach Parks & Recreation Department, which operates the marina.

“They’re beating the drum,” Metott said. “They can’t wait to get back.”

Metott said the city has a waiting list of boaters looking for mooring space at the marina.

Boaters who lived on their boats at the city marina before they had to leave to make way for construction in 2019 will be given priority for the renovated slips, Metott said. The city will reserve some slips for day use, so boaters can tie up and walk into the city to enjoy shops and restaurants. Details of how many slips will be left open were still being discussed in mid March.

For now, rates at the 24-slip city marina will remain the same as they were before it closed for renovations: $22 per foot of boat length per month for regular slips and $23 per foot per month for live-aboard slips.

The marina’s slips can accommodate boats up to 60 feet.

City commissioners will set new marina prices and policies in the months ahead.

“A new pricing plan is in the works,” Metott said.

The elevation of the marina’s seawall is the second part of a three-phase plan to alleviate high-tide flooding along Marine Way, especially during fall king tides.

The seawall has been raised at Veterans Park north of the Atlantic Avenue Bridge. Raising the seawall between the bridge and the marina will complete the plan.

Delray’s marina is just off the city’s Marina Historic District, which was added to the National Register of Historic Places in 2014.

The reopening of the Delray Beach marina comes as Palm Beach County’s Ocean Inlet Park Marina on the south side of Boynton Inlet is giving notice to boaters to leave by the end of April so contractors can begin work on renovations there.

The Coast Guard urges anyone paying for a trip on a passenger boat to verify that the captain has a Merchant Mariner Credential (captain’s license). For larger charter boats that carry more than six passengers, ask to see a Coast Guard Certificate of Inspection.

If the operator cannot produce the appropriate credentials, passengers should not get on the boat, the Coast Guard says. For more recreational boating safety information, visit www.uscgboating.org.