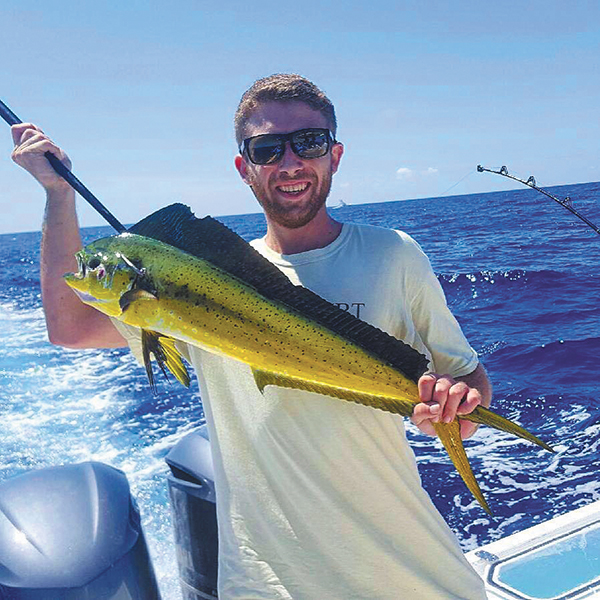 Austin Seidman, 21, did a lot of boating and fishing while growing up in Highland Beach. 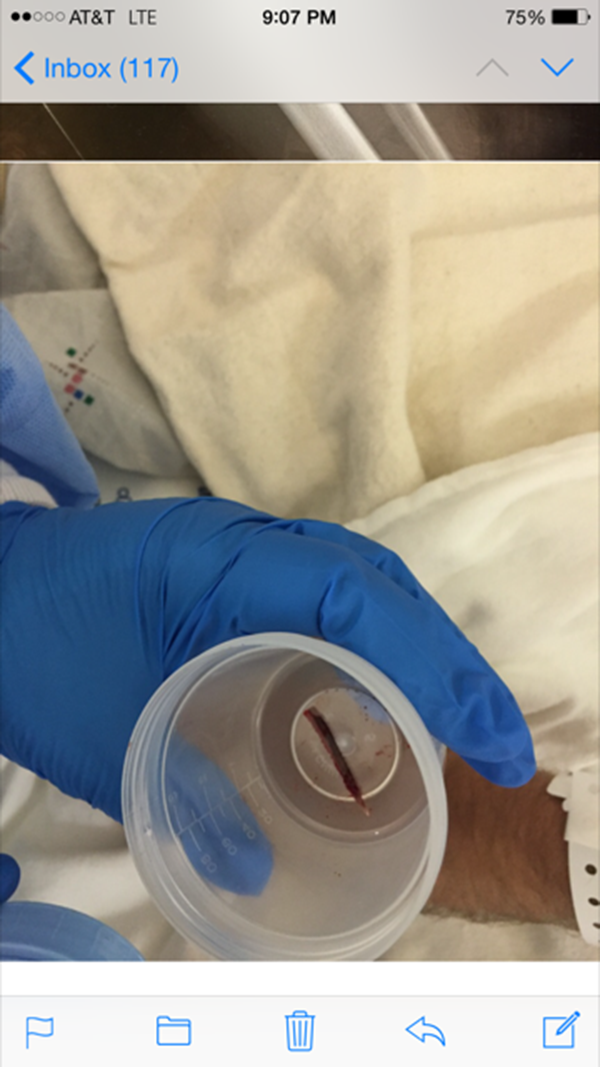 The catfish spine removed from his calf muscle. 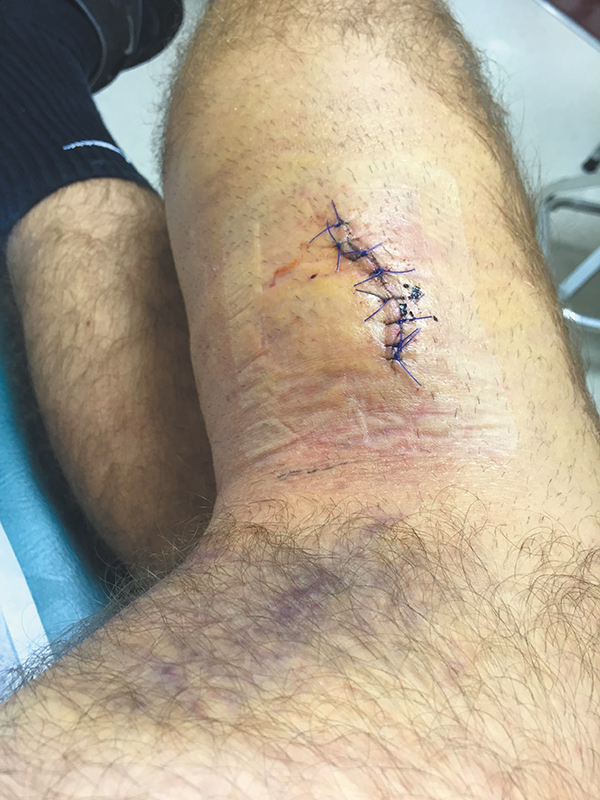 Stitches show the size of the wound after the spine was extracted.

Austin Seidman grew up on Highland Beach and spent a lot of time fishing and boating on the waters of south Palm Beach County.
The pre-law student at the University of Central Florida knows a fair amount about South Florida fishing.
But as he discovered while fishing with a friend from a Delray Beach dock in August, even a small, innocent-looking catfish can pose significant hazards.
Seidman was fishing at night with friend Xander Cohen and was using the small catfish as bait, hoping to catch a tarpon or snook near the dock where they were fishing just north of Linton Boulevard.
As Seidman tried to cast the catfish out into the water, it slapped the back of his leg, thrusting one of its venomous spines deep into his calf muscle.
“It felt like a scorpion,” said Seidman, who wanted to share his story so others don’t make the same mistake with catfish.
Cohen used cutters to cut the spine and release the fish, but the damage was done. A serrated catfish spine remained embedded in Seidman’s leg.
Seidman began to feel light-headed. Within 15 minutes, he felt shooting pain in his leg.
Cohen helped him limp into the emergency room at Delray Medical Center. After a few hours, the emergency room doctor stopped trying to remove the catfish spine and scheduled surgery, Seidman said.
Surgery was performed the next day at Delray Medical Center.
After the spine was removed, Seidman was stitched up and given pain medication and antibiotics. He spent the night in the hospital.
“The following week, it was like I got shot in the leg,” Seidman said. “I wasn’t walking. My leg was twice its normal size.”
Months later and studying at UCF, Seidman said his left leg remains weaker because of the catfish-spine injury.
“I wouldn’t even feel strong enough to play basketball,” Seidman said in early October. “If I ran a 5K, I know it would hurt.”
Seidman is not sure what species of catfish caused his injury. A common marine catfish in South Florida is the gafftopsail catfish, so named for the tall dorsal fin on its back.
Gafftopsail catfish have hard, venomous, serrated spines on their dorsal and pectoral fins. They’re difficult to handle in part because they excrete a slippery slime coating.
“Always wear gloves when removing your hook and watch out for the spines,” advises the fishing website www.Floridagofishing.com.
Small catfish pose the greatest hazard because their spines are smaller and more likely to puncture the skin than those of larger catfish, according to the catfish fishing website www.catfishedge.com.
Handle small catfish by sliding a hand up from the back of the fish so that the part of the hand between the thumb and forefinger rests securely against the back of the catfish’s dorsal fin, then hold them firmly, advises www.catfishedge.com.
A Manatee County man’s encounter with a catfish earlier this year was worse than Seidman’s.
While fishing on Sarasota’s Lido Beach, he set the hook hard. The catfish flew out of the water and hit him in the face. Its spine pierced his eye, leading to four surgeries and three months of recovery, according to a report by St. Petersburg television station Bay News 9.
Austin’s mother, Peggy Gossett-Seidman, said it was hard for her to believe the hazards of catfish until she saw the pain a catfish spine inflicted on her son.
“We get preoccupied about gators, morays and mosquitoes, yet a common footlong catfish [caught] off a neighbor’s dock caused great harm,” she said. “I never imagined catfish were so harmful.”

Palm Beach might restrict shark fishing near beach
If the Palm Beach Town Council gives final approval Nov. 8, shark fishing and chumming will be prohibited within 300 feet of town beaches and beach-access points.
The council approved the shark-fishing ordinance on first reading Oct. 10.
In addition to using bait and chumming to attract sharks, the ordinance prohibits “the use of shark lures and rigs” within 300 feet north and south of town beaches and beach-access points.
Sharks caught by accident in the restricted areas of beach “must be released and unharmed,” says the ordinance, which would take effect immediately if approved.
Deputy Town Manager Jay Boodheshwar said the shark-fishing and chumming prohibitions would be in effect 24 hours a day, seven days a week. Lifeguards, code enforcement officers and town police officers would enforce the regulations.
Signs explaining the shark-fishing rules should be posted at town beaches by January if the ordinance is given final approval.
Courtesy warnings are expected to be issued before beach anglers are issued citations, Boodheshwar said.

Fort Lauderdale boat show
The Fort Lauderdale International Boat Show continues through Nov. 7 at multiple waterfront locations.
Hours are 10 a.m. to 7 p.m. except on Nov. 7, when the show closes at 5 p.m.
Fishing seminars, free with the price of admission, will be offered at the Broward County Convention Center.
Adult fishing seminars produced by the IGFA School of Sportfishing continue through Nov. 6.
Kids fishing seminars produced by Hook the Future will be Nov. 5 and 6.
Admission is $28 for adults and $12 for ages 6-15. Ages 5 and under are free.
For details, call 954-764-7642 or visit www.flibs.com. from the beach in Delray Beach. Pfeil saw two bonefish cruising in a trough near the beach on a calm afternoon

and made a long cast with a soft-plastic lure, which landed in front of one of them. He released the bonefish.

Tip of the month
Thinking about buying or selling a boat?
BoatUS, the recreational boating organization, offers two free template forms for boat transactions: the purchase agreement and the bill of sale.
The purchase agreement outlines the buyer’s intention to purchase a boat contingent on several factors, such as completion of a satisfactory marine survey and the ability to obtain financing and insurance. It’s usually accompanied by a refundable deposit.
The bill of sale serves as proof of purchase and is used by the buyer to register the boat in his or her name.
The BoatUS forms include notes about what to check while filling in the blanks, such as making sure the boat’s hull identification number matches the number listed on the title and registration.
The forms can be downloaded from the BoatUS website at www.boatus.com/consumer/purchase-and-sale-forms.asp.