Mike Champlin and Ryan Golubovic with a small wahoo Champlin caught off Mar-a-Lago. The wahoo hit a bonito belly strip trolled below the surface behind a planer. Photos by Willie Howard / The Coastal Star

Many South Florida anglers look forward to the warm days of summer — a time to enjoy fishing the ocean with friends and family for catch such as mahi mahi, kingfish, mutton snapper, blackfin tuna and wahoo.

With the onset of long days, hot weather and relatively calm seas come a host of fishing tournaments (see list below), most of them targeting kingfish, dolphin and wahoo.

A few tips to consider when fishing the ocean during the summer:

• Get out early and finish early. Avoid the worst of the heat and the afternoon storms. Wear long sleeves, hats, sunscreen and sunglasses for sun protection. Drink plenty of water.
• Use live bait when possible. Catch it yourself with a cast net, small jig or sabiki rig (depending on the type of bait), or buy it from one of the boats that sell live bait, such as the Dynamite Live Bait boat often found just inside Boynton Inlet.
• If you hook a nice fish, tighten down the drag and move the boat toward the fish to bring it in before the sharks find it. Sharks’ eating hooked fish has become a year-round challenge for anglers fishing the waters off Palm Beach County.
• Fish deeper after the sun warms the water. Use weight, trolling planers or downriggers to get your bait below the surface. Try attaching a 2- or 3-ounce bank sinker to the line about 20 feet up from the bait by looping a No. 16 rubber band over the line and through the bank sinker. When the sinker comes up on the line during the fight, break the rubber band, then continue the fight.
• Look out for other boats. Don’t intrude on another boat’s fishing spot, but if several boats are lined up along the coast a few miles off the beach, chances are they’re drifting or trolling around weed mats for mahi mahi. You should be able to fish the same general area without invading the space of anglers on another boat.

There’s no need to own a boat to fish the ocean.

Try fishing on one of the inexpensive local “drift boats” such as the Lady K based in Lantana, the Living on Island Time in Hypoluxo or the Sea Mist III in Boynton Beach — or find a private charter at marinas such as Boynton Harbor Marina in Boynton Beach, Sportsman’s Park in Lantana or Palm Beach Yacht Center in Hypoluxo.

The daily bag limit is 12 spiny lobster per diver, except in Biscayne National Park and Monroe County (Florida Keys), where the daily limit is six.

Night diving is prohibited in Monroe County during the two-day sport season.

Divers must each have a valid Florida saltwater fishing license and lobster permit, unless exempt.

Lobsters must be measured underwater and landed in whole condition. The lobster’s carapace, or head section, must exceed 3 inches.

No egg-bearing lobster may be harvested. (Look for the orange, spongy mass under the lobster.)

Divers must display diver-down flags from boats and in the water and stay close to their flags.

The regular lobster season opens Aug. 6 and continues through March 31.

For details, go to www.myfwc.com and search for “spiny lobster.” 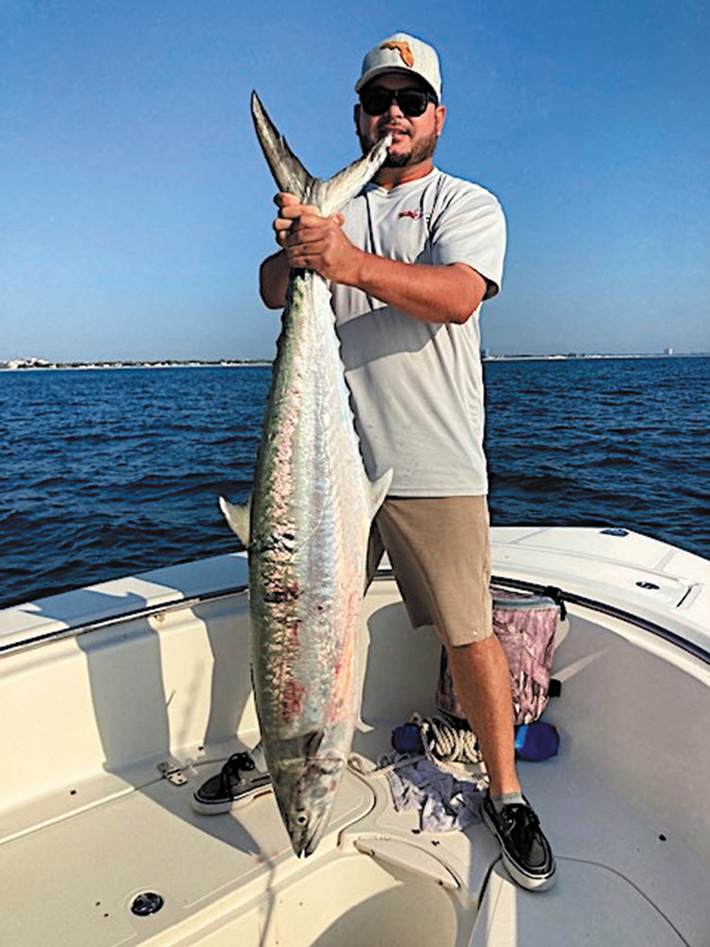 Jorge Nunez holds the 51-inch kingfish he caught in April using a live goggle-eye in 100 feet of water off The Breakers hotel. Fishing action for kingfish, dolphin and wahoo tends to heat up with the water temperatures during June and July.

The West Palm Beach Fishing Club is offering a fishing skills program for youths ages 12-15 who are accompanied by a parent or adult chaperone.

This summer’s SALTY program will be held June 18-19.

July 10: Big Dog, Fat Cat KDW Shootout based at Sailfish Marina in Palm Beach Shores. A kickoff party is set for 7 p.m. June 23 at Sailfish Marina. The captains meeting and silent auction begin at 5:30 p.m. July 9. Fishing will be from 6:30 a.m. until 3:30 p.m. July 10. Eligible fish: kingfish, dolphin and wahoo. Enter at www.bigdogfatcat.org.

Through Sept. 6: CCA/Florida’s STAR tournament. Prizes include college scholarships for youths and $10,000 for the registered angler who catches the first tagged dolphinfish (mahi mahi).

Prizes awarded for submitting photos of trash collected from the water. Young anglers can get community service hours for removing trash from the water and documenting their work by submitting a photo taken with the STAR measuring device.

Official 2021 STAR measuring devices are available at marine stores such as West Marine in Delray Beach or Tuppen’s Marine & Tackle in Lake Worth Beach.
Entry fee $40 for CCA members or $75 for non-members, including a one-year CCA membership. Register at https://ccaflstar.com or call 844-387-7827. 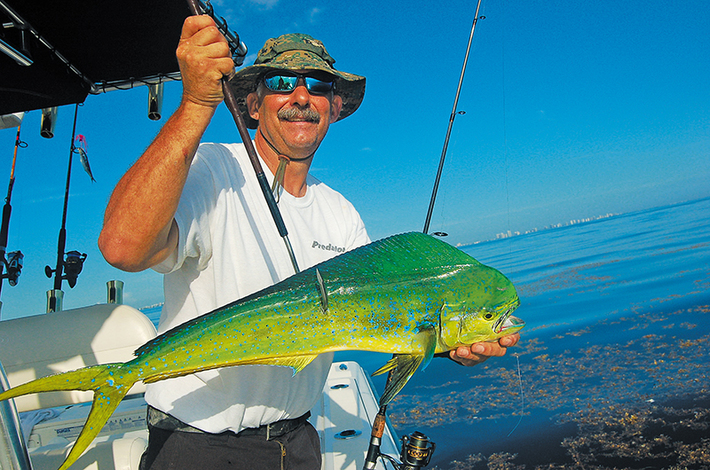 Scott Hart with a mahi mahi (dolphinfish) caught around mats of floating sargassum on a calm summer day. Calm summer seas give anglers the opportunity to run well offshore to search for weed mats and mahi mahi.

With more divers taking to the water during the summer and the two-day sport lobster season set for late July, boaters should be especially careful to watch for red-and-white dive flags displayed on boats and on floats pulled by divers in the water. Boat operators should stay at least 300 feet away from dive flags in open water and at least 100 feet away in inlets, rivers and channels.