Connor Dodge pumps gas into his boat, Defiant II, at Boynton Harbor Marina, where marine gasoline sold for $5.449 a gallon on April 18 (below, right). Dodge, Matt Broda and three other friends went fishing that day, catching a mahi that they split among themselves to feed their families. ’It’s been hard with these gas prices, especially for the young guys and local guys who are just trying to get out and catch fish,’ Dodge said. Photos by Tim Stepien/The Coastal Star 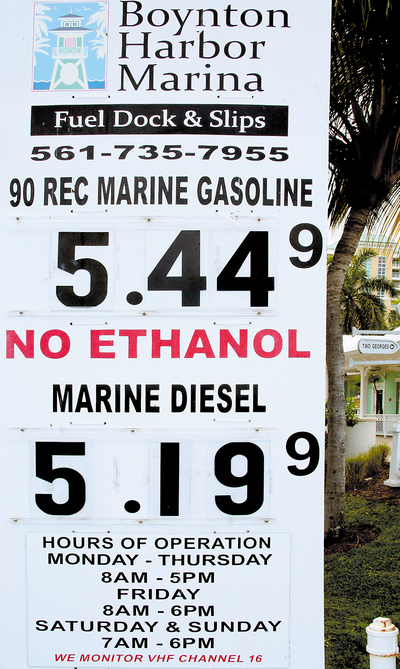 Boaters don’t need to be reminded of the recent jump in fuel prices at marinas and gas stations.
In early April, non-ethanol gasoline was selling for $5.50 to $5.65 at Boynton Beach area marinas.
But as they do when handling foul weather and other adverse conditions, boaters often figure out ways to adapt.
Let’s face it. If you own a seaworthy boat, it probably cost tens of thousands of dollars (or more) and you pay by the year for insurance and storage.
So it probably doesn’t make sense to leave your boat sitting around because of a spike in fuel prices.
Do the math. If your boat uses 30 gallons on a trip and your fuel bill jumped from, say, $110 to $170, that’s $60. It hurts, for sure, but it’s not a trip killer.
Nonetheless, this is a good time to think about your boat’s efficiency and about planning trips that minimize fuel consumption.
Sea Tow recently issued a list of fuel-conservation tips for its members, including tuning engines, fixing and cleaning props, cleaning the boat’s bottom to minimize drag and trimming the boat properly to maximize mileage.
If you don’t already know the most efficient speed for your boat, read about your model or check the manufacturer’s spec sheet to find the most efficient cruising speed and rpm.
Many boats come with smart gauges that display miles per gallon while you’re running. Most boats have a “sweet spot,” or most efficient speed.
Ben Belanger, general manager of Gulfstream Boat Club, said the club’s members in general do not seem to be overly concerned with the increase in fuel prices.
Belanger advises members not to plow a boat with its nose in the air and not to run full speed, either, to conserve fuel.
I like to run my 31-foot Contender between 3,500 and 4,200 rpm. The twin engines hum along at those speeds, as if they’re saying “ahhhh, this is what we were built to do.”
The result: about 1.4 mpg.
If I feel like going fast and throttle them up to over 5,200 rpm, mileage drops down to 1 mpg or below, depending on the load and sea conditions.
At the end of the day on a clear stretch of water, I still like to run my engines up to 5,200 or higher. But with higher fuel prices in mind, I limit my high-speed time to less than a minute.
Trip planning helps, too.
If the current flows north, as it usually does along the coast of South Florida, run south after you clear the inlet and drift back toward home.
If you’re planning to hit four spots during a fishing or dive trip, think about the sequence to minimize running distance.
There’s no need to run your boat north, then south, then back north again — unless a change in plans or conditions makes it worthwhile.
If you usually troll, try drifting part of the day.
If you don’t want to change anything about your boating style and still minimize fuel costs, invite that friend or neighbor you have been promising to take out, noting that you’re planning to split the fuel bill.
A $170 fuel bill split three ways is about $57. Split four ways, it’s $42.50 — not bad for a day on the water.
Don’t skimp on fuel and risk running out.
When planning a boating trip, follow the rule of thirds. Budget one third of your fuel to reach your destination, one third to get back and keep one third in reserve.

Resilient Island under construction
Palm Beach County is overseeing the $600,000 restoration of a small island in the Lake Worth Lagoon to create habitat for oysters, mangroves and bird-nesting.
Located north of Southern Boulevard on the east side of the Intracoastal Waterway, the restoration project dubbed Resilient Island is being paid for by The Nature Conservancy and the Florida Department of Environmental Protection.
Resilient Island is just south of the Tarpon Cove islands being built to improve fish and wildlife habitat along South Flagler Drive in West Palm Beach.
Work on the 1.2-acre Resilient Island is expected to be completed this fall, when 2,100 red mangroves are scheduled to be planted there.
Although Resilient Island is not meant for public access, shallow-water anglers and nature lovers should be able to enjoy the waters around the island by kayak or small boat.
Stretching from North Palm Beach to Ocean Ridge, the Lake Worth Lagoon is Palm Beach County’s largest estuary.