ABOVE: Parks runs the Dreamfinder to shuttle underwater video crews to film goliath groupers at wrecks off Boynton Beach this fall. Photo provided by Mike McKenzie BELOW: Parks is restoring the 25-foot Bertram little by little at his home in Boynton Beach. Photos by Willie Howard/The Coastal Star 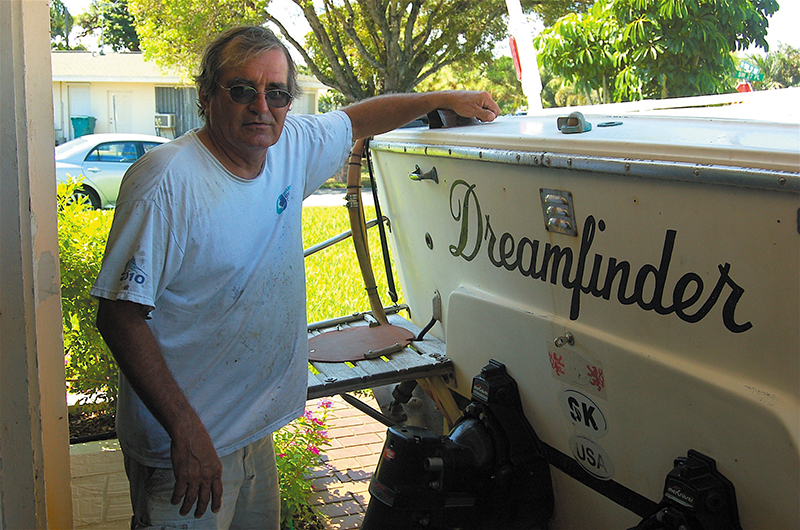 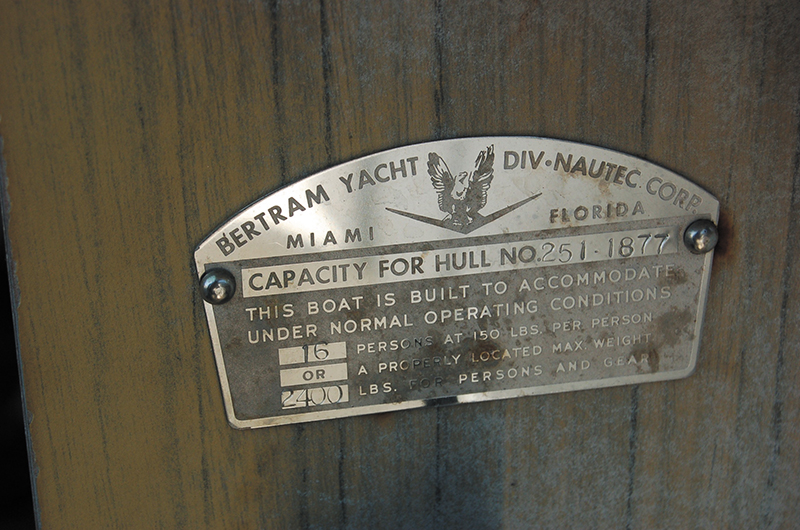 Bill Parks has been boating on classic deep-V Bertrams since he was a boy growing up in Delray Beach.

A veteran scuba diver and lifelong boater, Parks still uses his 1972 Bertram 25, named Dreamfinder, and is gradually restoring it at his home in Boynton Beach.

He continued the family’s Bertram tradition in 1986, when he and his wife, Chris, paid $9,300 for a Bertram 25 they found at a marina on the Hillsboro Canal. They named it Dreamfinder.

The boat is special to Parks because of the many happy days he and Chris, who died of cancer in 2002, spent on it, diving for tropical fish and running across the open ocean on frequent summer crossings to Bimini.

“The best times of my life were spent with the love of my life on this boat,” Parks said while looking at his weathered Bertram. “Our summers were priceless.”

Parks is so protective of the Dreamfinder that he towed it to Titusville when Hurricane Irma was bearing down on South Florida last year.

The boat’s mascot, a tiny doll named Figment, sits on the dashboard near the helm — a reminder of the years he spent on board with Chris. He still uses the wooden scuba tank racks that Chris made for the Dreamfinder.

“It’s a member of my family, even though it’s a machine,” Parks said.

Parks is not alone in his love of Bertram boats, which have something of a cult following.

South Florida has dozens of Bertram devotees, some of whom have painstakingly restored Bertrams built during the 1960s and ’70s.

The boat company was founded in Miami by veteran sailor and boat broker Richard Bertram. His boats set a new standard for ocean powerboats in the 1960s because of their wave-slicing, deep-V bottoms.

Bertram was sailing in America’s Cup trials off of Rhode Island in 1958 when he spotted a powerboat cruising by at 30 knots in 6-foot seas.

He tracked down the boat’s designer, Raymond Hunt, and commissioned Hunt to build him a 31-foot boat with a deep-V bottom, which he named Moppie after his second wife.

Bertram raised eyebrows in boating circles in 1960, when he and crew members Sam Griffith and Charlton Mitchell aboard the Moppie won the Miami-to-Nassau with a two-hour lead over the second-place boat.

As for Parks, he plans to keep the Dreamfinder as long as he’s able to use it and eventually hand it down to a family member or sell it to someone who cares enough to maintain it well.

Meanwhile, Parks continues to use his 46-year-old boat, powered by twin 140-horsepower MerCruiser inboard/outboard engines, and is restoring it little by little.

“I want the boat to look the way we used to keep it,” Parks said. “It’s going to take time.”

Sherri Beswick of Lake Worth caught a 49-pound kingfish to win heaviest fish in the 10th annual Bluewater Babes Fish for a Cure tournament, held Oct. 6 at Sailfish Marina in Palm Beach Shores.

Beswick was fishing with captain Bill Wummer on Spiced Rum III when she caught the winning fish on a slow-trolled blue runner in 150 feet of water off Juno Beach.

Only women can fish in the Bluewater Babes event, which provides support to women suffering from breast and ovarian cancer. A bad alternator on the boat’s engine almost prevented the Knot Surfin’ from making it back to Sailfish Marina in Palm Beach Shores to weigh the kingfish, which won $5,000.

Tags: bertram, column, on the water, restoration
E-mail me when people leave their comments –
Follow