Before dawn on the cool morning of Jan. 9, Rodrigo Vera of Delray Beach and the reef construction team from Global Sub Dive loaded 13 concrete reef balls onto a ship named Go America and headed out Port Everglades Inlet, bound for Delray Beach.

By 9:30 a.m., the Go America captain was maneuvering the ship over an artificial reef site in about 65 feet of water off the south end of Delray’s public beach.

After a cable from the ship’s crane was attached, the first of the 5-ton reef balls was lifted into the air, then carefully lowered into the water.

A diver followed to make sure the beehive-shaped structure landed upright on the bottom as intended. Palm Beach County environmental officials observed from a boat nearby. 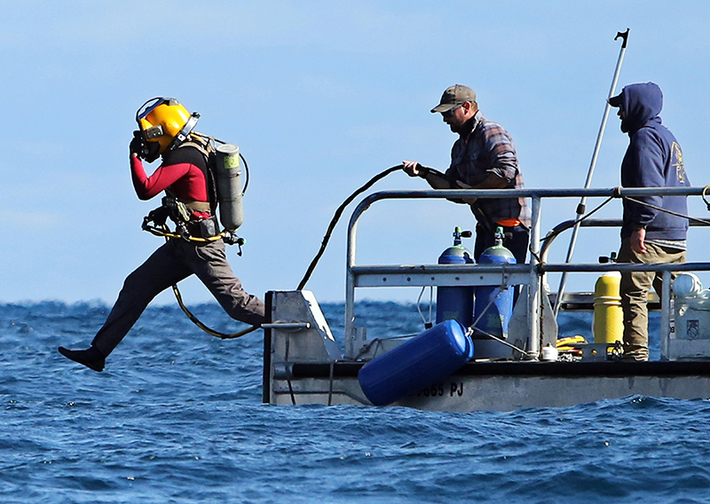 A scuba diver from Industrial Divers enters the water to make sure the ship sank the reef balls in the correct area of the ocean floor. Photos by Tim Stepien/The Coastal Star

The process was repeated a dozen times, each with a slight change in position to place each of the reef balls in predetermined spots at the northeast corner of the artificial reef site — a rectangular depression created when sand was removed for beach restoration.

Boaters should avoid anchoring over the reef balls because anchors could become stuck in the holes of the structures, said Jena McNeal, Palm Beach County’s artificial reef coordinator.

Anglers can fish over the reef balls by starting generally south and east of them and drifting over them.

Divers can explore the new artificial reef structures — and the fish they attract — by drifting with a support boat displaying a dive flag on the surface drifting with them.

Vera pulled the reef ball project together, working as president of CCA/Florida’s South Palm Beach County chapter and as a board member of the Sandoway Discovery Center.
Country singer Kenny Chesney’s No Shoes Reefs Foundation (www.noshoesreefs.org) paid for the reef balls.

CCA/Florida’s South Palm Beach County chapter used a $13,000 grant from Impact 100 Palm Beach County and another $10,000 raised at a CCA banquet to pay for transporting and placing the reef balls on the bottom.

Vera hopes the 13 reef balls will be the first part of a more elaborate artificial reef at the 32-acre site that will become an educational and recreational “marine park.” He is applying for permits for a buoy that would hold cameras transmitting live underwater video from the reefs to the Sandoway Discovery Center and is looking for a sponsor to pay for maintenance of the camera system.

Working through CCA/Florida, Vera also hopes to raise $100,000 to buy, clean and sink a freighter that he said would fit perfectly in the rest of the Delray Beach artificial reef site.

Details about plans for the Sandoway Marine Park can be found at www.delrayreef.org. After finishing the first day with four releases, the Miss Texas anglers picked away at the sailfish using live bait under fishing kites south of Palm Beach Inlet.

They finished the second day with eight releases to beat 46 other boats in the derby.

Capt. Nick Carullo and his team on Priceless almost beat the Miss Texas team, but wound up finishing second with 11 releases because one of the team’s sailfish could not be identified on video. Rules in modern sailfish tournaments require each sailfish to be shown on video, along with a member of the crew touching the leader to score the release.

Forty-seven boats released a total of 196 sailfish in two days of fishing.

The daily bag limit for king mackerel, better known as kingfish, is four per angler, up from two — at least until March 16. The minimum size remains the same at 24 inches to the fork of the tail.

The former two-kingfish bag limit will apply again after March 16, according to the Florida Fish & Wildlife Conservation Commission.

Want to learn more about tagging and releasing small dolphinfish (mahi mahi) to benefit research about the species? Visit www.dolphintagging.com.