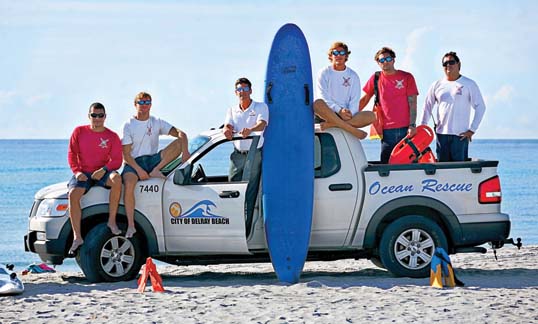 The scanner crackled: “Possible near drowning” in Gulf Stream.
Delray Beach Fire-Rescue responded about 2:30 p.m. on that last Friday in May.
Soon a battalion chief would interrupt a meeting to summon Ocean Rescue Superintendent James Scala to the beach. He was needed to lead the search for the missing swimmer.
Rodelson Normil, 17, disappeared in the rough surf, in an unguarded area about a half-mile south of Gulfstream Park.
Scala began to conduct the search in a methodical manner, using guidelines from the United States Lifesaving Association. His Ocean Rescue staff belongs to the group known for its high physical membership standards.
First, Scala talked with Normil’s friend.
“I needed to be certain he was in the water and where he went under,” Scala said. He had been part of two other searches where the missing swimmer was found to be alive — and on land. The exact place Normil was last seen determined a starting point for the search.
After speaking with the friend, Scala saw the head of the rip current where Normil was last seen. Not a strong swimmer, the Boynton Beach teen likely panicked when the rip current pulled him away from the beach.
Scala looked to the ocean to check the water’s visibility and the current direction. On May 31, the ocean was choppy, diminishing visibility to zero. The 10- to 15-mph winds from the east created perfect conditions for rip currents.
Ocean Rescue staff would later call the conditions that day “the worst possible” for a search.
Scala next organized his staff to do a grid search. He stayed on the beach, watching his team execute the search. He received periodic updates from his line leader, Justin Rumbaugh.
He put down a marker on the beach, lining up with the spot where Normil was last seen in the ocean. Rumbaugh, with four years’ experience in Delray Beach, then reviewed the grid pattern with the other lifeguards.
The line leader is picked usually because he can talk the loudest to his teammates in the ocean.
The person also knows the USLA hand signals, such as when a guard swims 10 strokes underwater, resurfaces and touches his head: That means the guard is OK.
The poor visibility forced the guards to swim close together when doing the search.
The Ocean Rescue staff had to close one of its beaches to swimming when it sent two guards via an ATV to help with the search, about 3 miles north of the city’s beaches. The other guards who assisted the search in its early minutes were Justin Walton and Rafael Costa, both with two years’ full-time experience in Delray Beach.
When Rumbaugh as the line leader told the guards where to turn, they realigned and swam perpendicular to the direction they were just swimming, using the same grid pattern. Then they switched and swam back in the opposite direction until they passed the point where Normil was last seen, about 250 feet out in the ocean. That way, every area was searched.
“I am really proud of the staff,” Scala said. “Even when there was a break to review the search pattern and a beachgoer brought them some water to drink, no one took it. They just wanted to get back to searching for Normil.”
Despite the precise, coordinated effort, the body of the young swimmer was not recovered.

Training and teamwork
Twice a year for a full month, Delray trains its lifeguards in the USLA search and recovery method, said Eric Feld, an operations supervisor. The guards train in the classroom and the ocean three to four times a week for one hour during that training month.
In May, Ocean Rescue staff had just refreshed their search and recovery skills, he said. Ocean Rescue lifeguards also are emergency medical technicians, said Scala, who has worked at the city division for 10 years.
The May 31 grid search was truly a multi-agency effort, he said.
Delray Beach guards were joined by three from Palm Beach County Ocean Rescue. Mark Rodrick, a 15-year veteran with the county, came down from Ocean Inlet Park to help. Two guards, Cathy Conlin and Michael Soutter, arrived from nearby Gulfstream Park. Both have 29 years of lifeguarding experience.
The poor visibility underwater made goggles useless, Scala said. The guards needed only flippers and buoy markers. When they could no longer feel the bottom, they dived under until they could and then resurfaced, looking back and lining themselves up with the team.
Delray Beach later sent two more guards up to the search effort. They were Luigi Pratt with seven years’ experience and Kyle Stewart with more than two years’ experience as city lifeguards.
“They executed the search and worked as a team. Scala said. “All that training pays off. … It was physically demanding.”
Through an agreement with the town of Gulf Stream, Delray Beach Fire-Rescue handles the town’s emergency calls. Fire-Rescue was in charge of the call when it first went out as a missing swimmer, Capt. Curtis Jackson said.
The department had its entire special ops unit, Fire Station 5 and a battalion chief on the beach, he said. Two of its paramedics, Tyler Adams and Mark Szrejter, aided Ocean Rescue in search, along with Phil Wotton, district captain with Palm Beach County Ocean Rescue.
About 3:15 p.m., when the missing swimmer call became a search and recovery mission, the U.S. Coast Guard took control.
It sent a helicopter from Miami, an 87-foot cutter from the Fort Pierce Inlet and a boat from the Lake Worth Inlet, according to Petty Officer Mark Barney.
The helicopter had a four-person crew: two pilots, a swimmer and a mechanic. One pilot flew the helicopter in a rectangular spiral pattern while the three others visually searched their assigned quadrants, so that no area of the ocean was missed, Barney said.
On an overcast day, the helicopter flies a few hundred feet above the ocean. The crew twice reported seeing something in the water that the Ocean Rescue lifeguards used to redirect their search.
Unfortunately, they never found Normil.
His body probably met with one of two outcomes.
The littoral drift or longshore current comes close to the shore in that area of Florida, according to John Fletemeyer, a lifeguard turned sea turtle monitor and coastal researcher at Florida International University.
“So possibly the teen’s body was carried up the coast,” he said.
When a person drowns, his lungs empty, dropping the body to the ocean floor, he said. After a few days, it fills with gases and the body floats to the surface.
The other possibility is even more grim: “The sharks [may have] got to it,” he said.
Rip currents are the No. 1 problem at the beach, according to Fletemeyer. “One hundred fifty people die annually in rip currents, making them more serious than shark bites or lightning strikes,” he said.
Fletemeyer and the other lifeguards said Normil’s disappearance serves as a cautionary reminder for ocean enthusiasts: Always swim near a lifeguard. 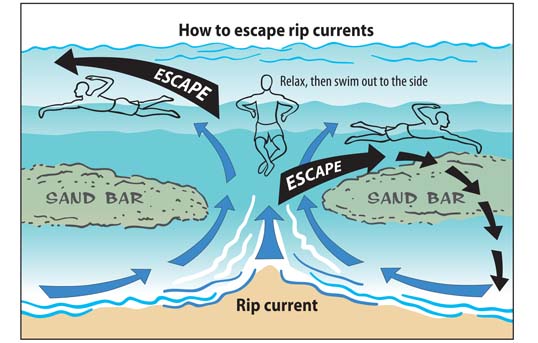