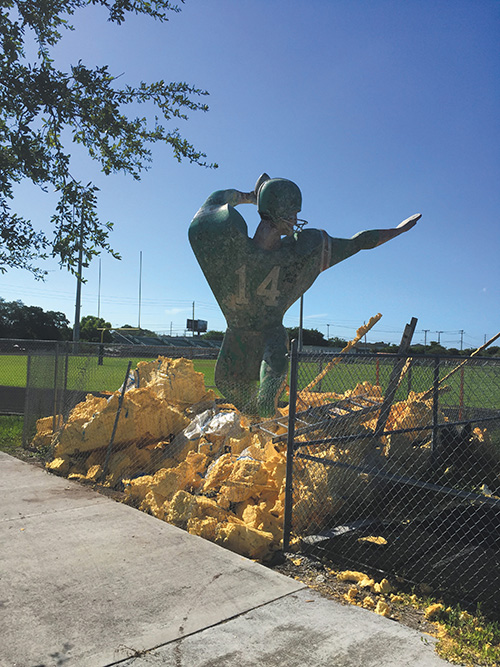 The statue that has been a symbol of the Atlantic High School football program for nearly 50 years has finally found what school officials hope will be its permanent home.
Constructed in 1968 by Delray Beach-based sculptor Don Seiler — whose original intent was for it to be displayed in Miami’s Orange Bowl — the 20-foot-high steel-reinforced concrete statue was originally placed at Hilltopper Stadium adjacent to the former Atlantic campus on Seacrest Boulevard, thanks to the generosity of the Atlantic High Class of 1969.
Seiler had the figure in the statue wearing No. 14 and poised to throw a pass as a tribute to former New York Giants quarterback Y.A. Tittle. While Tittle had no connection to Atlantic High, he was known as the Bald Eagle, thus forging a tie-in with the school, whose nickname is the Eagles.
The first attempt to move the 10-ton statue in 1968 failed when a cable snapped. But it was repaired and officially dedicated in December 1968.
When the Atlantic campus moved to its current location on Atlantic Avenue in 2005, efforts to bring along the statue went nowhere until Tara Dellegrotti-Campo, who took over as principal last year, convinced Delray contractor Chuck Halberg that it needed to be moved. That took place this summer.
“I was a little surprised it made the trip,” Atlantic athletic director Kevin Logan said.
The wooden box in which it made the move was stripped off and the statue now sits where Logan expects it to be indefinitely, at the north end of the football stadium.
“They need to spruce it up because it looks pretty ratty,” Logan said. “All the paint is off it; it looks like it’s been sandblasted.”
Logan said he expects either Atlantic art students will undertake the project or the School Board will take it on. “We’re still kind of waiting,” he added.
Logan said he hopes the 48-year-old statue will help foster a connection between the school and its alumni.
“The old guard knows about it, and we’re going to use it to promote some unity from the past,” he said. “People have always asked about it, who it was and why it was there. When we moved over from the old school a lot of that stopped, but our alumni feel strongly about it.”
Logan said he expects the statue to be dedicated at a football game this fall, possibly at the homecoming game in October.