Stretching from the Intracoastal Waterway to the Atlantic, Ocean Strand is the last

undeveloped real estate of its kind left in Boca Raton.

The Ocean Strand, a spectacular swath of green real estate stretching from the ocean to the Intracoastal, is public land. But for 20 years, it has not been used by the public.
Only sanderlings play in the foam of waves lapping a wide white-sand beach, where five sea turtle nests are roped off with protective orange tape. 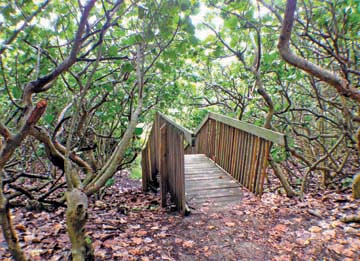 On a gentle ridge above the sand, wood steps — apparently built in the hopes that someday people would walk on them — lead into the dense shade of tall sea grapes and buttonwoods, their twisting trunks gnarled and thick with age. The traffic noise on A1A fades beyond the urgent squawk of a blue heron, the hissing scream of a barn owl and the hum of cicadas.
The 15 acres of Ocean Strand is an incongruous sweep of wild green land wedged between the high-rise Boca Towers condos to the south and more condos to the north.
The last undeveloped real estate of its kind in Boca Raton has sat eerily undisturbed for two decades.
Bought for $11.9 million in 1994 by the city of Boca Raton, Ocean Strand is now owned by the Greater Boca Raton Beach and Park District, which reimbursed the city. 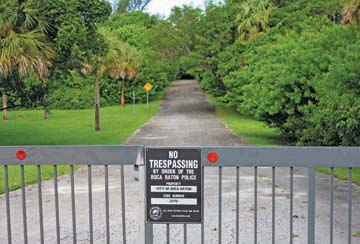 A locked gate greets potential visitors who might try to access the property from A1A.
INSET ABOVE: Steps cross over dunes on the east side.

Private plan nixed
On its 20th anniversary as public land, one of the most impressive pieces of real estate on the southeast coast stands empty, unused and surely unappreciated by local residents, who are banned from it.
A metal gate with a “No Trespassing” sign blocks the entrance and for good measure another sign warns “Do Not Enter,” even though a yellow sign denoting a bicycle path can be clearly seen on the land in the distance.
No families roam its shady paths or bike on the inviting asphalt lane that dissects sweeping green lawns and thickets of trees and sabal palms between A1A and the Intracoastal.
Although the district paid $20,000 to the landscape/architecture firm of Curtis + Rogers for plans for a passive park in 2011, and heard suggestions for a park from architect Richard Brooks, the district has never acted on those plans.
Landscape architect Aida Curtis of Curtis + Rogers told district commissioners in her proposal in 2011 that Ocean Strand naturally divides into three zones — the oceanfront, a central meadow and the Intracoastal — and that each area could support different uses.
An outdoor space such as one for yoga could go on the beach portion; lawn games, a garden center or outdoor concerts on the meadow; and rowing, sailing or a bicycle club on the Intracoastal, she said.
The district, however, was more interested in allowing a private members-only beach club on Ocean Strand in 2011.There was an uproar that ended in court. Keep Your Boca Beaches Public, a citizens group, sued the city and the district over plans to allow the development of the beach club. The court sided with the citizens, and the city passed an ordinance that prohibits private uses of the city’s public beaches and waterfront lands.
Although the Ocean Strand has yet to be opened to the public, the land could have had a far worse fate. The city bought it from a developer who was planning to put eight to 16 housing units on the ocean side of A1A and 200 units on the Intracoastal side, said Art Koski, district acting director and legal counsel.
“Buying the land showed a lot of foresight by then Mayor Bill Smith,” said Koski. “It was going to be a very dense development, and Mayor Smith made it a personal mission to save it. It was the last available ocean property in the city.”

No big demand
The reason the commission hasn’t developed it into a park, he said, is simple: The public hasn’t asked for it.
“There has been no immediate demand from the public for it to be developed,” he said. “The general consensus was to let it stay there and be maintained so the appearance was acceptable and plans could be made at some future date.” The district spends about $10,000 a year on maintenance.
Boca Raton Mayor Susan Haynie, who did not support the members-only club proposal, describes the land as “one of the most beautiful and natural properties on the barrier island.”
Development of the land as a park is “subject to approval of the City Council, as any property within the city is,” she said. “The city of Boca Raton changed the land use to recreation, so it can only be developed for recreation purposes.”
Joe Pedalino, chairman of Keep Your Boca Beaches Public, who spearheaded the suit to stop private use of Ocean Strand, has proposed to build a park accessible for the disabled.
“We always thought it should be designed as a park for people with disabilities and their families, so everyone would have the ability to have use of the ocean and park facilities. Many disabled people are able-bodied, such as wounded vets from Afghanistan, who want to be outside and do things. This is what we proposed to the district,” he said.
Pedalino said he was inspired by Boynton Beach’s 13.5-acre Congress Avenue Barrier Free Park, built on undeveloped land two years ago for $2 million.
“We went far beyond the Americans With Disabilities Act standards. It’s not just for those with disabilities but for everyone. It’s for those with cerebral palsy and their families, it’s for the vet coming back from war who wants to play with his child,” said Wally Majors, Boynton Beach Recreation and Parks Director.
The park, for example, has playgrounds accessible to those in wheelchairs. “Usually, if you’re a parent in a wheelchair, you have to sit on the sidelines and watch,” he said.
Pedalino’s condo at Boca Towers overlooks the green expanse of Ocean Strand, a constant reminder of the land’s potential as a natural haven where those in wheelchairs, or those who are deaf or blind, could navigate wide paths through the woods and down to the beach, use accessible bathhouses, and work out at fitness stations designed just for them.
“We’re not saying they should do something for the sake of doing it,” said Pedalino. “In the district’s view, it doesn’t fit a need, but we think it does fit a need.”
Meanwhile, joggers run on the sidewalk by busy A1A and most of them probably assume the land with the “Do Not  Enter” signs is privately owned and awaiting development. They likely have no idea the land belongs to them.