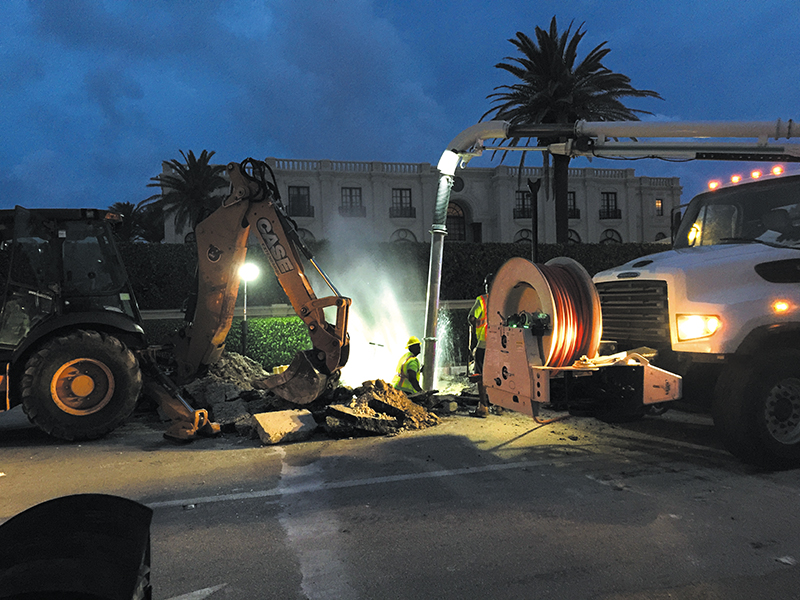 Boynton Beach city employees work May 24 to repair a water main break that disrupted traffic at Ocean Avenue and A1A and forced the city to stop water service to about a dozen Ocean Ridge homes. They patched the pavement and put up a barricade until the road could be repaired. Photo provided by Tim Laflin

Former Ocean Ridge Commissioner Ed Brookes said he got nowhere trying to persuade Boynton Beach to drop the idea of creating a dog beach at Oceanfront Park when he attended the city’s commission meeting in May. Brookes criticized town officials for not going to the meeting and voicing their opposition.
Town Manager Jamie Titcomb and Mayor James Bonfiglio said they can’t oppose what doesn’t exist. They’re waiting to hear what Boynton’s plan looks like. So far, the city hasn’t gone beyond discussion. Ocean Ridge’s ordinances prohibit dogs on the public beach at any time, and the Town Commission has steadfastly maintained that’s not going to change, no matter what Boynton Beach decides.

Resident offers possible bargain on license plate recognition cameras
Ocean Ridge resident Finbarr O’Carroll and Police Chief Hal Hutchins are working on a proposal for license plate recognition cameras that could save the town tens of thousands of dollars.
O’Carroll, a telecommunications executive with the Kerry Group, thinks he might be able to install a camera system as part of a test program for $13,000, roughly $200,000 less than retail estimates.
An enthusiastic Town Commission told Hutchins to work with O’Carroll and bring a proposal to the June meeting.