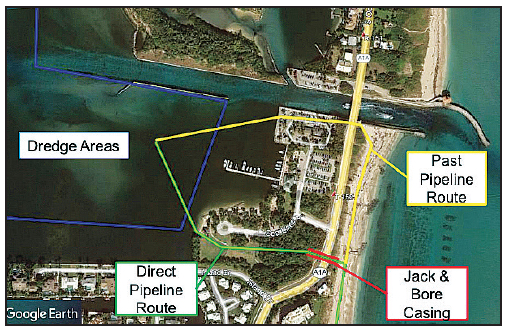 One project will construct a direct pipeline for more efficient dredging of the South Lake Worth Inlet sand trap. It is expected to finish by March. The other is to modernize the marina in three phases, which could take several years. Rendering provided

Ocean Inlet Park is about to undergo renovations from two Palm Beach County construction projects, raising concerns about noise and congestion over the next few months at the county-operated park.
The first project, a modernization of the aging marina, was supposed to start in May but is now expected to begin in a few weeks, Ocean Ridge building official Durrani Guy told the Town Commission on Nov. 1.
Around the same time, heavy equipment is expected to arrive for the other project, the initial phase of a jack and bore project to reroute the inlet dredging pipeline to the south end of the park under State Road A1A.
Both projects “are going to make a gigantic construction mess, which we can’t do anything about,’’ Commissioner Steve Coz said.
Guy said the actual jack and bore process, starting from the west side of A1A, is scheduled to begin Jan. 4 and should last about a week. After a steel casing is installed under the road, the dredging pipe will be laid along a more direct route from the dredge areas west of the marina to the beach along the ocean.
The previous route, on the north end, disrupted park operations and beach access during periodic dredge operations because the pipeline was exposed in the parking lot, along the jetty and on the beach.
Town Manager Tracey Stevens said in her report Nov. 1 that the pipeline project should be done by March and will allow for more efficient dredging of the sand trap at the South Lake Worth Inlet, commonly known as the Boynton Inlet. It is typically dredged every six to eight years to remove sand accumulation captured by the inlet system.
“This new pipe route will be much safer for beach, boat and park users during future dredging events, in addition to shortening the pipe distance to the ultimate sand placement area in the Ocean Ridge Shore Protection Project area,’’ she said.
The marina project, which will be done in three phases, could last several years.
Before approving a six-month extension to the county’s building permit, some commissioners expressed frustration about delays in the first phase of the marina renovations.
Although the town issued the county a building permit in November 2020, work has been delayed because of the county’s lengthy bidding process for a contractor, Guy said.
“This is just the first phase of the project, so this project is going to last quite a long time and they’re already starting out a year and a half late,’’ Commissioner Geoff Pugh said.
In other business, commissioners gave Stevens permission to lift the mask mandate for employees and visitors at Town Hall. Vice Mayor Susan Hurlburt suggested posting a sign asking unvaccinated visitors to wear masks. “The smart thing is to get vaccinated and we can all be done with this and not have to discuss it anymore,’’ Commissioner Martin Wiescholek said.
• Stevens planned to meet with Boynton Beach officials in early November to discuss the city’s plans to replace the blue light poles on the Ocean Avenue Bridge with black ones and to paint the railings and decorative objects on the bridge black. Town commissioners weren’t thrilled with the color choice, but Stevens pointed out that Boynton Beach pays to maintain the entire bridge even though Ocean Ridge has jurisdiction over half of it.
• Candidate filing for the March 8 election started Nov. 1 and ends Nov. 12 at 3 p.m.
Coz is the only commissioner up for re-election and as of Nov. 1 no one had filed to challenge him.