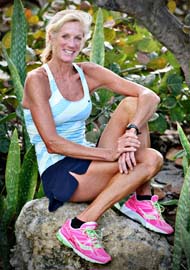 Lee DiPietro has been running since she was a child. She competes in about 25 races per year.
Tim Stepien/The Coastal Star

Lee DiPietro knows how it must look to the uninitiated. Here she is — it’s 7:15 in the morning, a time when many folks in Gulf Stream are still rubbing sleep from their eyes or stirring cream into their coffee — and she’s hot-footing it past their windows, not even breathing hard, occasionally calling out to a security cop, “No, no, I’m not running from anyone, I’m OK.”
DiPietro grins, her past-the-shoulder-length hair still damp from the shower, and says, “They think I’m crazy.”
Crazy, yes, crazy about running. And crazy good at it.
DiPietro is an elite runner. The top American masters woman in the 2005 Boston Marathon. Twice a qualifier for the Olympic trials. A sixth-place finisher in the 1997 Hawaii Ironman, which meant 26.2 miles of running, 112 miles biking and a 2.4-mile swim.
Her personal best marathon time: 2 hours 46 minutes 59 seconds. Just for comparison’s sake, the men’s qualifying time for the 2014 Boston Marathon is 3 hours 5 minutes; for women, it’s 3 hours 35 minutes — and that’s in the 18-to-34 age range. DiPietro turns 55 this month.
“I’ve always been super competitive,” she says. “I’ve always wanted to win. You get that endorphin high and you meet all the challenges and you think, ‘Boy, I made it through that tough spot.’ ”
Florida is its own kind of tough spot. Not for the heat, though. Much of the year, home for DiPietro and her husband, also named Lee, is Ruxton, Md., just north of Baltimore, where summers get plenty hot. Florida’s challenge is its table-top terrain. “No hills, it’s all flat,” DiPietro says, gazing out the window of the Ocean Ridge garden apartment the couple just sold; they’ll move, late this month, into a house nearby. “My legs feel kind of flat because there’s no change in pace.”
Ah, but what’s running without challenges? So, pretty much every day, she’s up and out and, on this Monday morning, just returned from an 11-mile out-and-back through Gulf Stream to the end of Seagate and home again. Sometimes, for variety and “altitude,” she’ll run the old beach road north and over the bridge for what she terms “a little hill work.”
She’s writing a book about running — Against the Wind, she calls it — and her editor, Herta Feely, is pushing her to comb through her past, relive her running highs and lows, dig deep into the inspiration, motivation and, yes, perspiration it takes to do what she’s done and continues to do.
So back to the starting line: She was one of five daughters, the middle one, growing up on Long Island, and schoolwork wasn’t her personal best. “I was always an athlete,” she says. “I think that was my way of getting attention. I stood out. I couldn’t wait to get out on the playground. Lacrosse, field hockey, basketball, running.”
Her parents divorced when she was 8. They both remarried, which meant step-parents and step-grandparents and step-siblings. “I think running was a big outlet for all those years,” she says.
It was an outlet, too, when she was commuting to midtown, two hours in, two hours out, working in sales for the fabric firm Brunschwig & Fils. Back home in Long Island, she shook off her tiredness by running. It was 1985 when she experienced her first race — the last 10 miles of the Boston Marathon — to accompany her sister. “I jumped in right before Heartbreak Hill,” she remembers, “and, omigod, people are cheering for me!” 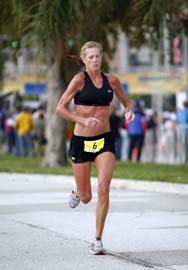 Right then, the bug bit and it never let go. “In November of ’88, I ran the New York Marathon with my own bib on my stomach,” she says.
Since then, she’s run — she pauses to calculate, gives up — oh, maybe 25 races a year, some of them 5Ks, some marathons. “You want to make sure you set an attainable goal and you can finish it,” she says. “Next time, you push yourself a little harder and you discover things about yourself.”
In 2010, all that pushing got a double-whammy test, spelled out in the subtitle of her book: “An Ironwoman’s Race for Her Family’s Survival.” First, her husband, himself an accomplished triathlete, was diagnosed with cancer, a hamstring sarcoma. Then, the day before his surgery, their phone rang with the news that their then-30-year-old son, Tim, had been in a horrific accident and was being airlifted to the hospital. He’d broken both legs, cut a major artery, might never walk again.
“My running background and discipline,” she says, “that mentality — hitting the wall in a race and pushing past it — got me through.”
That mentality helped get her husband through rounds of chemo and radiation, their son through multiple surgeries. As if to illustrate, the front door opens and the other Lee DiPietro strides in, just back from his morning bike ride. Tim DiPietro visited over the weekend and announced that he’s embarking on a back-country ski trip in Alaska.
On a hall table, there’s a picture of Tim, leg in a cast, leaning on a walker. And a photo of Tim now, all healed and raring to go. And there’s his younger-by-four-years brother, Cryder, the nonrunner of the family, who made his own athletic mark in lacrosse.
So, yes, the good times are punctuated by bad ones, but, for DiPietro, even the bad ones have their purpose. “You can never tell what’s gonna happen on race day,” she says. “But you have these dark moments to think about what went wrong and how to make it better.”