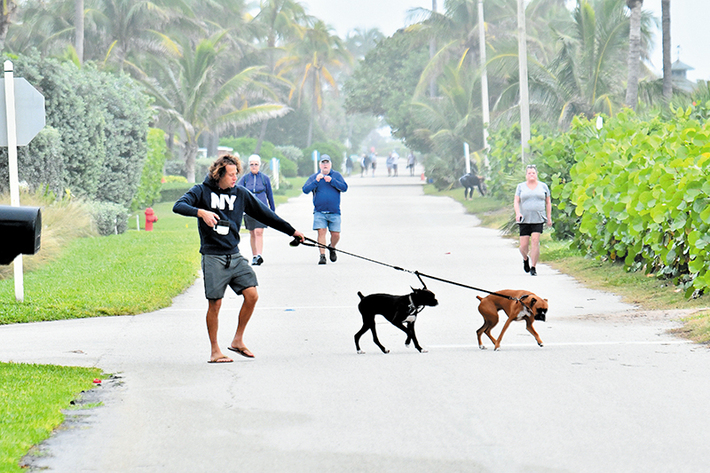 Ocean Ridge officials are seeking volunteers to serve on a task force to come up with ways to protect the growing number of pedestrians flocking to Old Ocean Boulevard.
Keeping pedestrians safe on the oceanside road has been broached off and on over the years, most recently in 2016 when commissioners explored the idea of changing the traffic flow to one way to create a promenade.
Although that idea never advanced, Vice Mayor Susan Hurlburt in early January said the issue needs to be addressed as more and more residents move to the area and discover the road as a walking route.
“Old Ocean is becoming crowded,’’ Hurlburt, who takes walks on the road twice a day, said at the Jan. 3 Town Commission meeting. “I’m seeing a lot of speeding, running stop signs, plus it’s really packed. Between the walkers, the bikers, the dogs, the skateboarders and the cars, I’m afraid it’s an accident waiting to happen.’’
The emergence of the coronavirus pandemic in early 2020 has contributed to growing crowds as more people seek outdoor leisure activities, Police Chief Richard Jones said.
“Old Ocean is a roadway and that is what many folks don’t realize,’’ he said. “They have earbuds in. They don’t pay attention to anything that’s going on around them. They’re just on a mission to walk or exercise, and it’s a beautiful place to do it, but it’s always potentially an unsafe place to do it if you’re not alert to your surroundings.’’
Commissioner Steve Coz said an obvious solution is to increase police patrols to cite motorists who run stop signs or stop along the road to unload beach chairs.
Hurlburt wants to collect ideas that haven’t been considered in the past, including different traffic calming measures. “Anything we can do to make a safer environment,’’ she said.
Old Ocean Boulevard runs nearly a mile from Corrine Street in Ocean Ridge to Briny Breezes, east of and parallel with State Road A1A. Much of the Ocean Ridge stretch offers unobstructed views of the ocean.
“It’s the only street of its kind in Palm Beach County,” said Commissioner Geoff Pugh, who suggested the one-way promenade with planters in 2016 when he was mayor.
“You can be the poorest guy in the world and the richest guy in the world and you have the same opportunity to walk directly next to the ocean. It literally is a gem for the town of Ocean Ridge.”
Town commissioners agreed to form a task force of residents. Volunteers should contact Town Manager Tracey Stevens at tstevens@oceanridgeflorida.com or 561-732-2635.
In other business:
• Town employees and visitors will decide on their own whether to wear protective masks in Town Hall. Commissioners considered whether to mandate masks because of the omicron surge and agreed to let employees take an anonymous survey of their preferences. More than 92% voted to make mask-wearing a personal choice, Stevens said.
• The commission voted 4-1 to participate in a proposed $26 billion nationwide settlement with opioid manufacturers and distributors. If the deal is approved, Ocean Ridge stands to get $32,000 to $36,000 over 18 years.
The lone no vote came from Commissioner Martin Wiescholek, who offered a sharp rebuke of the deal, noting it will come from a fraction of the combined profits of Johnson & Johnson and drug distributors Cardinal Health, AmerisourceBergen and McKesson.
“I’m going to make a very bold statement here: Keep your free money. I don’t want it. This is not what this town should be about. We should be ashamed of taking $32,000 for a settlement of 500,000 people that have been killed,’’ he said. “It’s the settlement culture that we have come to accept as part of our daily lives, where corporations can do whatever they want and if they get caught, they pay a little settlement.”