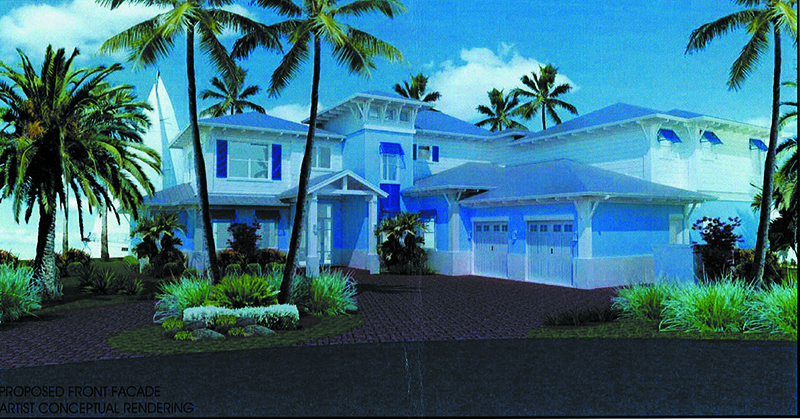 Ocean Ridge commissioners have taken the extraordinary step of halting new construction until they can close loopholes in the town’s building code that could allow the approval of large, potentially commercial residential projects — sober homes, for example.
On May 7, the commission unanimously approved the first reading of an ordinance that calls for a temporary moratorium on permitting and development orders.
Mayor James Bonfiglio says the shutdown “is not a property-specific action” but rather a “work in progress” intended to address building issues that the commission has confronted for months.
“We’re not trying to ban any home,” Bonfiglio said.
While Ocean Ridge hits the pause button on builders with new projects, the hope is the town’s Planning and Zoning Commission can come up with recommendations that will tighten building rules and allay fears of sober homes for the long term. But the early returns on that aren’t particularly encouraging.
During a meeting in late May, P&Z board members expressed frustration over their lack of expertise for tackling such a complicated and legally perilous undertaking — one that comes with a maze of unintended consequences. Even the smallest change can set off a chain reaction of collateral problems.
“You do one thing and it bites you on the other hand,” said Chairman Gerald Goray.
“Everything that comes up, there’s 10 things more that come up with it,” said board member Penny Kosinski. “At what point are we spinning our wheels?”
“You can’t cherry-pick,” said Mark Marsh, an architect on the panel. “One thing has a ramification on another thing.”
Town Engineer Lisa Tropepe agreed: “Unintended consequences. Those two words are huge.”
P&Z members decided to request help from the Town Commission. They want commissioners to hire a certified planning consultant to guide them through their deliberations.
Town Manager Jamie Titcomb said Ocean Ridge already has a contract for other work with Kilday & Associates, a West Palm Beach urban planning firm, and the Town Commission could consider bringing Kilday on board at the June 4 commission meeting.
A pivotal event could come two weeks later, however, when the commission and the P&Z board hold a joint workshop on potential code and ordinance changes — perhaps with a planning expert at the table — beginning at 8:30 a.m. on June 18. Titcomb warned the participants to keep a long block of time open for that one.

Proposal for huge home sparked response
The flashpoint that lit the fire under commissioners to approve the moratorium was the submission of a concept review application for a nine-bedroom, 11½-bath home at 92-94 Island Drive South.
John Lauring, the Massachusetts businessman who owns the property, told commissioners during a special meeting April 30 that he and his family have been spending winters in Ocean Ridge for 22 years.
Lauring said he opposes the moratorium because it is unfair to large families. He said 63 people are in his immediate family, and he needs the nine bedrooms to accommodate them.
Lauring said the idea that the family home would become a sober house “is far from the truth.”
Bonfiglio told Lauring the town isn’t using the moratorium to target specific projects but rather concerns over “shortcomings in our code that we need to address.”
In recent years, numerous South Florida municipalities — among them Boynton Beach, Delray Beach and Boca Raton — have experienced the legal complications of trying to regulate the spread of sober homes. Some municipalities have learned a costly lesson in the courts about infringements on individual property and privacy rights.
Bonfiglio and the commissioners said the P&Z board should review four issues related to large homes: onsite parking requirements, drainage impact, septic tank limits and whether the structure’s entrances and exits are adequate for evacuations during fires or other emergencies.
Vice Mayor Don MaGruder said the town should take into account the impact of sea level rise when considering how to change its rules for the long term.
“We need to look down the road and see where we’re going to be in four or five years,” he said.
Part of the town’s move toward a longer view on development rules includes the hiring of a full-time, in-house certified building official. Commissioners unanimously approved Wayne Cameron for the position during the meeting on May 7.
Cameron, a building official in Palm Springs, has 30 years’ experience in construction inspection in South Florida. He holds a bachelor’s degree in public safety administration from St. Petersburg College and will start in Ocean Ridge at an annual salary of $74,500.