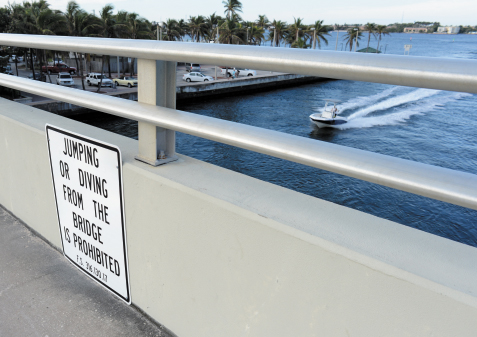 A sign mounted on the inlet bridge announces that jumping and diving are prohibited.  Jerry Lower/The Coastal Star

Ocean Ridge and Palm Beach County officials have reached an agreement on security changes that will allow the county to move forward with a planned $6 million renovation of Ocean Inlet Park Marina.
Park officials told the Town Commission on Nov. 6 that the county is willing to provide overnight security at the Boynton Inlet on weekends and holidays to allay safety concerns that heightened after a recent drowning.
Amantay Brown, 21, of Boynton Beach drowned in October while swimming in the inlet between 2 and 3 in the morning.
Water in and near the inlet is known to be treacherous. Five people have drowned at the inlet in the past three years, including a 3-year-old who fell into the water on the park side west of A1A, according to county officials.
Ocean Ridge and Manalapan police, as well as the Palm Beach County Sheriff’s Office, patrol the park and surrounding area but do not maintain a constant presence. The town agencies have expressed safety concerns about the inlet since the Palm Beach County Sheriff’s Office removed its Marine Patrol and cut back on parks enforcement staff in 2010, citing budget concerns.
Commissioners and county parks officials hope the plan for overnight, on-site security during peak use periods will help to ensure that the park and jetty are used only by fishermen — not swimmers.
Bob Hamilton, the county parks development director, told the commission his department will assign rangers or hire an outside security company to monitor the park area between 11 p.m. and 7 a.m. during weekends and federal holidays. Neither the park rangers nor private security guards will have arrest powers but will contact police as problems arise.
Also, the county plans to construct a residence in the park so a caretaker/dockmaster can live there and provide another set of eyes.
Exactly when the enhanced security measures will begin still needs to be negotiated. Ocean Ridge and Manalapan would prefer that it start immediately, but county officials say they have budget constraints that could keep that from happening.
In November, the county installed six “jumping or diving from the bridge is prohibited” signs in the park area in the hope of deterring risky behavior.  Other signs warn against swimming at night.
Ocean Ridge Police Chief Hal Hutchins said he was satisfied with the agreement, though it might be necessary to adjust the hours of the security coverage as events warrant.
“I think this is a good start,” Hutchins said. “I think the activity that is there after the park closes — to regulate it so that it’s only open to fishermen — is the key to security.”
Mayor Geoff Pugh also supported the plan, though he lamented that it’s been difficult getting Sheriff Ric Bradshaw “to open his wallet” and play a greater role in policing the area.
A 1985 agreement between the county and Ocean Ridge says only, “Sheriff will provide adequate law enforcement in the park.”
The vagueness of the language has raised issues over the years, at least on the town’s side, about whether the county is doing its fair share to keep the park safe and secure.

Landscape plan approved
In another concession to Ocean Ridge, the county agreed to provide more landscaping than town code requires in the southwest corner of the park as an enhanced buffer zone.         Because the park property falls within the boundaries of Ocean Ridge, the county must comply with the town’s building code and get the commission’s approval for the renovation.
The Inlet Park Marina hasn’t had a facelift since it opened 30 years ago. The plan calls for replacing bulkheads, docks and boat slips, and constructing a new two-story building to be shared by sheriff’s personnel and the dockmaster. The renovations’ start date isn’t likely to come before 2020 because the parks department has a backlog of projects in the pipeline.