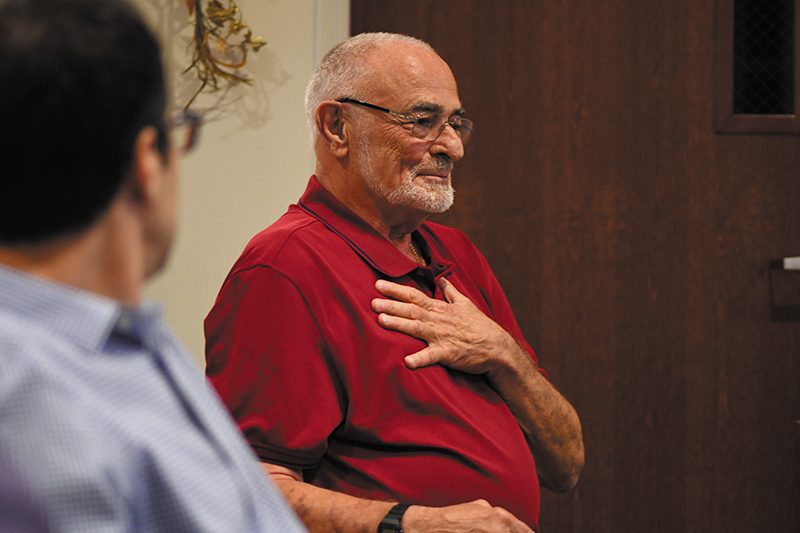 Robert Sloat, a 20-year resident of Ocean Ridge, reacts after his appointment to the commission. He said he would not run in the March 12 election. Jerry Lower/The Coastal Star

Seven candidates came forward in Ocean Ridge and volunteered to serve the next three months in the commission seat of former Mayor James Bonfiglio, who resigned in November in an unsuccessful bid to win election to the state legislature.

It took the four sitting commissioners three rounds of voting on Dec. 10 to determine who should replace Bonfiglio until the March 12 municipal election.

They chose someone they’ve seen a lot of — Robert Sloat, a frequent participant at commission meetings, workshops and “coffee with a cop” sessions.

Sloat, a 20-year resident of the town, cited his civic involvement and experience as a former university professor and administrator as reasons he’s a good choice. That work included time on the faculty at Florida Atlantic University.

“In my past life as an administrator, I’ve managed multimillion-dollar budgets, I’ve supervised up to 60 people and I currently work for an organization that does police promotions,” he told the commission.

“I would like to participate further in Ocean Ridge activities. And I assure you that if I’m offered the position, I will not run for an office again.”

Sloat won the votes of Mayor Steve Coz, Vice Mayor Don MaGruder and Commissioner Phil Besler to claim the seat. Commissioner Kristine de Haseth voted on all three ballots for Zoanne Hennigan, a former commissioner and chair of the town’s charter review committee this year.

The other five candidates were: Ed Brookes, a 16-year resident and former commissioner; Martha-Lisa Denavea, a registered nurse and business owner; Susan Hurlburt, who has worked as a historic preservation advocate in Delray Beach; John Lipscomb, the property manager of the Villas of Ocean Ridge and a former business owner from St. Louis; and Paul Pantozzi, a retired New Jersey bank CEO and board chairman.

While Sloat won’t enter the March election, Lipscomb and Hurlburt intend to. The two have qualified to run for the commission along with Coz, who is seeking another three-year term.

• Police Chief Hal Hutchins says it won’t be too long until the town has a network of license plate recognition cameras online and running.

“We have three nodes up and working,” Hutchins told the commission. “We’re in a testing phase with dispatch. We had some difficulty getting wireless connectivity, so we had to switch vendors from Verizon to AT&T. That set us back a little bit.”

The network will have cameras positioned at points of entry on State Road A1A and east of the bridges on Woolbright Road and Ocean Avenue.

“It is working correctly,” Hutchins said of testing in December. “We are capturing data. We’re tweaking a few things and doing well in the scheme of things in the LPR world.”

• Commissioners told Town Manager Jamie Titcomb to begin negotiating contracts for pest control — including mosquitoes, no-see-ums and iguanas — and bring them back for consideration. The contracts will cover only services for town properties, but residents likely will be able to sign on with the contractors and purchase pest control plans for their homes and lots.